The Rise of Liberal Religion

I’ve recently cracked open Matthew Hedstrom’s recently published The Rise of Liberal Religion. Hedstrom’s book is providing me with an opportunity to reconfigure my thinking and teaching on the respective trajectories of twentieth-century (and beyond) Protestant liberalism and evangelicalism. 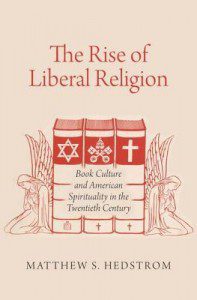 In recent decades pundits and some scholars have made much of the post-WWII evangelical resurgence, coupled with a precipitous post-1965 mainline decline. For evangelicals, the post-WWII religious boom kept going for the rest of the century, whereas in terms of membership, the mainline segment of that boom rather quickly went bust. As long as the Republicans were winning presidential elections with the robust support of evangelical voters, it seemed that evangelicals had swept the field of Protestant religion in the United States. In my own scholarship, I’ve at least partly supported this paradigm. When I examined Campus Crusade for Christ in the context of other Protestant campus ministries, it seemed fairly obvious that evangelicals had outperformed their mainline counterparts. I’ve also taught the story of post-WWII American religion roughly along such lines.

After 2008, I thought obituaries of the Religious Right were very, very premature. Come on, Republican Party. If you want to win an election, you may as well try to ride that horse one more time. I know Romney performed better than McCain among evangelicals, but I still think it’s much easier for the Republican Party to win a presidential election with a candidate with fervent evangelical support (this requires the rather delicate trick of not scaring the daylights out of everyone else in the country). But in the long run, I tend to agree with Albert Mohler that evangelicals had better get ready for a sojourn in the political wilderness. I remember (but could not find to link) a splendid editorial by the Christian Century’s David Heim (some uncertainty about the author) from quite a few years ago (presumably before the 2008 election) wryly encouraging evangelicals to enjoy their moment in the political and cultural limelight because it would prove fleeting. In a short time, they’d be with their erstwhile liberal Protestant bedfellows in the scrapheap of political history. Very prescient. [Blogging has its disadvantages, but it does allow the most tenuously sourced allusions].

Enter Hedstrom. He argues (I’ve yet to get beyond the introduction and conclusion, so this is just a first impression of the basic argument rather than a careful analysis, and I’m using his introduction as a launching pad for more general reflections about the trajectory of American religion and culture) that observers of American religion have been too obsessed with institutional strength at the cost of ignoring culture, and he examines the role of middlebrow reading in shaping the religious and cultural sensibilities of twentieth-century Americans. Hedstrom’s primary focus is print culture, a subject that especially in its middlebrow forms has suffered from scholarly neglect.

Liberal Protestants may have ultimately lost the battle for membership, but they won the larger cultural struggle. A trenchant quote from the sociologist Christian Smith: “Liberal Protestantism’s organizational decline has been accompanied by and is in part arguably the consequence of the fact that liberal Protestantism has won a decisive, larger cultural victory.” One could turn to a host of other scholars to buttress Hedstrom’s contentions: David Hollinger and Leigh Schmidt immediately come to mind. Through their embrace of religious pluralism and more universal mystical religious experiences, liberal Protestants imperiled their own institutional strength but persuaded many Americans of the value of their ideas.

Institutional strength counts for a great deal. In surveys of American religion, evangelicalism is holding up much better than the mainline. Cultural influence accompanied by institutional decline sounds like a a rather pyrrhic victory. Nevertheless, the reappraisal of liberal Protestantism by Hedstrom, Hollinger, and others seems persuasive to me. A few decades of political influence accompanied by a growing cultural irrelevance (not there yet) is also not exactly a triumphant narrative. While I agree that the ideals of liberal Protestantism at the moment seem to have more cultural cachet than those of evangelicals, I have some reservations. For starters, it probably depends on where one lives. In northern Virginia, definitely. In southern Alabama, I wouldn’t be so sure. Finally, while broader trends in American culture might seem closer to the ideals of liberal Protestants than their evangelical counterparts, I think both groups simply now find themselves on the margins of an American culture that seems out of synch with either brand of Protestant Christianity.

Is it time to throw out my old lecture notes and begin again, with considerable more nuance and attention to broader cultural change?  Any thoughts?