I recently reviewed David Swartz’s Moral Minority for Books & Culture. Swartz is a gifted writer, and his book was a pleasure to read. 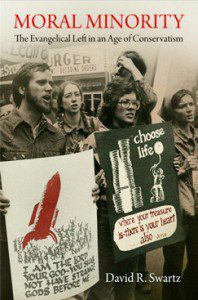 David’s history of the evangelical left is a pleasure to read (and it should be so even for those on the opposite side of the partisan divide). Most attractively, he crafts a coherent narrative that weaves together portraits of a pantheon of progressive evangelical leaders: Jim Wallis, Richard Mouw, Sharon Gallagher, John Alexander, Samuel Escobar, John Howard Yoder, and Ronald Sider. I had encountered many of these figures through their own writings and as bit players in larger histories of evangelical politics. Moral Minority, by moving them to center stage, introduced them to me more deeply. The story begins at a moment of promise, as these and other figures gathered together in 1973 to work out a shared religious and political vision. It seemed to them, and to a few outside observers at the time, that evangelicals were “up for grabs” politically.

By 1980, of course, no one thought evangelicals were up for grabs (it did seem that way in 1976). Swartz offers up two primary reasons for the political failure of progressive evangelicalism. First, the evangelical left fractured along lines of race and gender, much like other progressive movements of the 1960s and 1970s. Unity proved impossible. At the same time, the Democratic Party adopted a stringent pro-choice orthodoxy that left evangelical progressives in the political wilderness. Pro-life but anti-war and anti-poverty, they had no political home. The Republican Party, meanwhile, successfully competed for the votes of politically conservative evangelicals. Despite this obvious political failure, Swartz emphasizes the evangelical left’s broader influence on the trajectory of American evangelicalism.

I was struck by the humaneness and humanity of the leading figures in Moral Minority. Certainly, there have been evangelical progressives who more fully subordinated themselves to the objectives of the Democratic Party. Some have displayed more than a touch of self-righteousness. Nevertheless, I couldn’t help but like most of the men and women in Moral Minority, as I conclude:

The world of American evangelicalism would have been greatly impoverished—theologically and culturally—without the men and women who populate the pages of the Moral Minority. Consider this description of Ron Sider: “Into the 2000s Sider and his wife Arbutus, a family therapist, still practiced simple living. They cooked out of the More with Less cookbook, by then in its 47th printing. They purchased most of their clothes at thrift stores and maintained a modest home in a mostly black neighborhood of Philadelphia.” At their best, the activists of Moral Minority were prophets who called on their fellow evangelicals to take a look beyond the comforts of their suburban American to inner-city neighborhoods, prisons, warzones, and developing-world slums. And, yes, to the world of politics, one vehicle to combat the many injustices of our world.

Read the whole review here. Buy the book. And University of Pennsylvania Press, please bring it out in paperback so that I can assign it to my students.

Evangelical
Christmas Gifts for the History Buff in Your...
Anxious Bench
TRENDING AT PATHEOS Evangelical