I have been writing about the Other texts that shaped Christian thought through the long Middle Ages, all the alternative gospels and apocryphal texts that literate people read with almost the same veneration that they paid to the canonical scriptures. One problem with finding such materials is that we often don’t know exactly the point of time at which they were used. In Armenia, for instance, a host of apocryphal texts survived, but in fairly late copies – sixteenth century or afterwards. It’s a reasonable assumption that these were read much earlier, but we can’t be entirely sure.

In one case though, historical circumstances give us an accurate terminus date, so that we have a true cross-section of what the church was reading at a particular time. The resulting picture of that one particular Christian culture is amazing in its breadth and, frankly, its oddity. It also raises important questions about exactly how the limits of the Bible were defined during long stretches of Christian history.

Anglo-Saxon England was converted in the century or so after 597, and in the following centuries became one of the liveliest cultural centers of Western Europe. Scandinavian invasions caused massive damage in the ninth century, but Anglo-Saxon culture and literature continued to flourish until the Norman Conquest of 1066. Within a couple of generations after that cataclysm, the Anglo-Saxon language ceased to matter as a learned tongue. When we find a text associated with the Anglo-Saxon church, then, we can say confidently that it was used somewhere between 600 and 1066 or so, and is very unlikely to be much earlier or later. 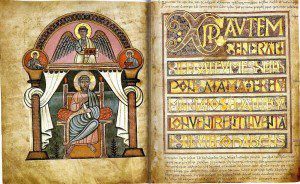 A century ago, M. R. James remarked that “the Anglo-Saxon and Irish scholars seem to have been in possession of a good deal of rather rare apocryphal literature,” mainly in Latin but occasionally even in Greek. The content of that library has attracted much scholarly interest in modern times, in books like Apocryphal Texts and Traditions in Anglo-Saxon England (2003), edited by Kathryn Powell and Donald Scragg, and Frederick M. Biggs’ Sources of Anglo-Saxon Literary Culture: The Apocrypha (2007).

With that material in mind, what can we say about the English Christian bookshelf? It certainly included all the canonical books of the Bible, as well as such deuterocanonical works as Judith, Tobias, Wisdom, and Sirach. But English clergy also knew and read a sizable body of Old Testament pseudepigrapha, including 1 and 2 Enoch, Jubilees, the Assumption of Moses, as well as Psalm 151. They also used the bizarre Irish text De Plasmatione Adam, which was added to the older Life of Adam and Eve. 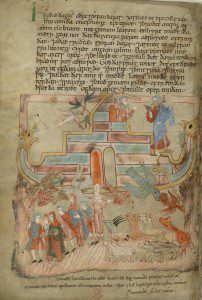 Among New Testament apocrypha, few doubted the authenticity of Paul’s Letter to the Laodiceans or the Gospel of Nicodemus, with its account of the harrowing of Hell. Apocryphal Lives of the Apostles were especially popular. Partly due to the English church’s curious connections with the East Mediterranean, the Syrian saint Thomas was a beloved figure. Hexham’s eighth century bishop Acca built up a very full and distinguished collection (amplissimam ac nobilissimam bibliothecam) of the lives and Passions of the apostles and martyrs, among many other ecclesiastical books.

Anything dealing with apocalyptic or the End Times commanded special interest, including the Apocalypses of Thomas and Peter, the Visio Pauli, and the Christian sections of the Sibylline Oracles (Versus Sibyllae de Iudicio). Also in circulation was Christ’s alleged correspondence with king Abgar of Edessa. 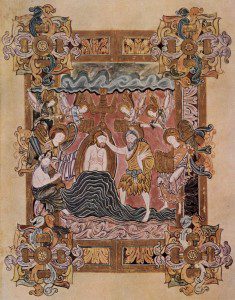 Devotion to the Virgin Mary meant that scriptures and pseudo-gospels concerning her life or career circulated widely (See Mary Clayton’s The Apocryphal Gospels of Mary in Anglo-Saxon England). Some texts described the Virgin’s birth and upbringing (the Gospel of Pseudo-Matthew and the De Nativitate Mariae), others her Assumption and passing from this world (Transitus S. Mariae).

Quite apart from surviving manuscripts or contemporary references, we see the influence of these alternative scriptures in art and poetry. The Book of Cerne includes a fragment of an eighth century play based on the Harrowing of Hell, which is incidentally the oldest play written in England. The Book of Enoch is a prime source for the common theme of the Fall of the Angels. 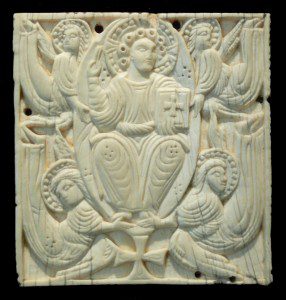 Modern readers draw a strict line between canonical scripture and such lesser forms as apocrypha, pseudepigrapha, and hagiography. Such divisions would have been hard to explain in an era when, basically, books were books, and most of what was written was likely to be, of its nature, sacred. It’s useful here to look at neighboring Ireland, which had access to an even more spectacular range of apocryphal scriptures. David Dumville notes that in Old Irish, the word canóin (canon) “did not have the meaning of ‘established fixed Canon (of Scripture etc)’ but referred always to text as opposed to commentary. … there prevailed no clear and immediate mental distinction between canonical and uncanonical biblical texts.” Generally, that remark certainly applies to England.

However broad-minded in their attitude to canonicity, Anglo-Saxon readers were by no means uncritical in their acceptance of these other texts, which might serve to admit heretical teachings. Nor did they automatically assume that texts were in fact written by the authors whose names they bore. For one thing, clergy had access to ancient works that discussed these issues at length, especially Fathers like Jerome (although that did not help with texts written after his time). Bede, in the eighth century, acknowledged doubts about the authorship of some texts, but still advocated reading them. Enoch, for instance, was clearly suspicious, “but because that book which is presented under his name is considered not truly written by him, but edited by some other one under the title of his name.” Yet it still merited reading, especially because it was cited as scriptural in the New Testament epistle of Jude.

Other scholars were more dubious, and the eighth century scholar Aldhelm condemned the Visio Pauli, the Apocalypse of Paul. So did the later writer Aelfric, who would probably have supported a wholesale national purge of apocryphal manuscripts if that had been vaguely feasible. In fact, he consigned many to a damning category of lease gesetnysse, “false compositions.” Yet even Aelfric cited apocryphal accounts of the Virgin’s birth and parentage as authoritative. He also cited the fifteen letters of Paul, including Laodiceans. Lacking the resources of later scholarship, just how was it possible even for such a skeptical and widely-read churchman to tell what was canonical and what not? Googling was not an option.

If we look then at one thriving Christian nation around 1000 AD – roughly, the halfway point of the Christian story to date – then “Holy Scripture” was still a flexible concept. It definitely included, say, the Gospel of John, but alongside other books now largely forgotten that also carried authority. Regardless of what ancient councils had declared, the de facto canon of scripture was much wider than we think of today. Indeed, the English canon at that time had much in common with that of the present-day Ethiopian church, which also grants full recognition to Enoch and Jubilees.

The medieval English church then – regarded at the time as a paragon of Catholic orthodoxy and papal loyalty – was reading a package of scriptures very different from any modern Western concept of the Bible. This mattered so much because, far from being isolated at a distant corner of Christendom, the English church in its day was one of the world’s great missionary bodies, sending offshoots and church plants across Western Europe, into France, the Netherlands, Germany, Switzerland and beyond. And where those missionaries went, they took the Bibles they knew. 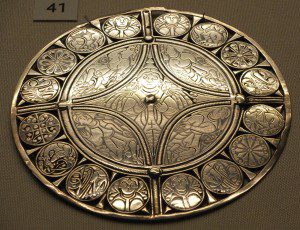 April 17, 2013 George Beverly Shea (1909-2013)
Recent Comments
9 Comments | Leave a Comment
"Very interesting...and troubling. Thanks for bringing to attention. Some of the paranoia and conspiracy thinking ..."
OrthoAnabaptist From the Russian Empire to the ..."
"Thanks for the history! It's hard for a Western Baptist to grasp the interest in ..."
Roger McKinney Icons, Russia, and a Church’s Dark ..."
"God/Jesus scripture tells all of His elect to judge righteously."
D.M.S. The Future of Catholic Universities
"Interesting piece.I am, however, wondering why it seems you failed to mention the plethora of ..."
Hamrick Who Will Bear the Cost of ..."
Browse Our Archives
Related posts from Anxious Bench