I have been writing on the persistence of alternative forms of Christianity through the long Middle Ages. In my next couple of postings, I will be focusing on one remarkable and powerful movement that flourished in South-Eastern Europe, namely the Bogomils, and their truly ancient ideas. When we look at the alternative Christian worlds of the second and third centuries, we find to our surprise that they never went away, but simply moved their centers of operation, and endured for at least a thousand years. Those undercurrents ran steady, and ran deep.

Anyone interested in church history knows about the very wide range of belief systems that surfaced in the first couple of centuries, but these assorted heresies become so numerous and (often) so bizarre that it is very difficult to keep track of them. And in the long term, we may ask, do they really matter? Is cataloguing heresies any more valid an intellectual pursuit than collecting stamps? To the contrary, though, I believe these alternative systems are immensely important for what they suggest about the nature of Christianity over a span of over half the history of the faith. For one thing, they point to the mythical nature of the sharp line we often draw between early and medieval Christianity – between the very diverse world of the early church and what we imagine to be the monolithic orthodoxy of the Middle Ages.

Throughout that long millennium, in fact, many diverse variants of Christianity co-existed, covering a spectrum of belief very much like the movements of the earliest church. Some of them really did constitute whole alternative churches, existing alongside the mainstream Catholic and Orthodox churches, and operating in deadly rivalry with those bodies. My own interest in the Dualist tradition dates back to my youthful reading of Zoe Oldenbourg’s novel Destiny of Fire, about the Albigensian Crusades of the thirteenth century. More recently, I have been working on the Bulgarian Bogomils and their inheritance from the fringe Christianities of the Near East. 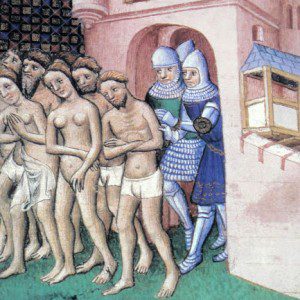 Let me say right away that this view of long continuities is deeply unfashionable in modern scholarly circles. For convenience, let me summarize the two competing schools of thought:

i. For much of the twentieth century, scholars drew links between various Dualist movements, whose roots dated back to the early centuries, and which were heavily influenced by Manichaeanism. One such movement was the Paulicians who troubled the eastern borders of the Byzantine Empire from the seventh century. From the eighth century onwards, the Empire transported thousands of these tough border peoples to the Balkans, where they could help guard against barbarian assaults. However, moving the Paulicians also meant importing their Dualist heretical beliefs into Europe. Bulgaria soon became the center of a full-fledged Dualist heresy in the form of the Bogomils. By the 1020s, similar Dualist views began surfacing in France and Italy. By 1150, these Albigensian views were so strong in Southern France that they represented a full-fledged alternative church. Stephen Runciman described these movements in a 1947 book significantly entitled The Medieval Manichee, while Dimitri Obolensky published his great work on The Bogomils (1946), with the subtitle “a Study in Balkan neo-Manichaeism.” Yuri Stoyanov’s book The Other God similarly draws these long connections over time and place. 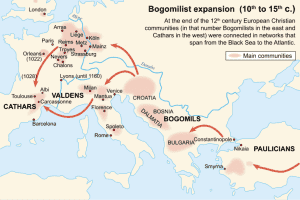 ii. More recent scholars disagree totally, and their views currently dominate the field. In The War on Heresy (2012), for instance, R. I. Moore argues that heresy charges in the twelfth or thirteenth centuries have to be seen in the context of the Inquisitors investigating dissident groups, and the social and political conflicts that gave rise to heresy trials. To oversimplify, Moore certainly agrees that ordinary French or Italian people protested against the church hierarchy of their day, and turned to the New Testament to do so, but in no sense were they Dualists or Manichaeans. Rather, they were anti-clerical and anti-sacramental. In his histories of the Albigensian Crusade and the subsequent persecutions, Mark Pegg similarly sees no evidence for real heresy, and certainly nothing with deep Near Eastern roots. When people confess to bizarre heresies, they are doing so under coercion or torture, and are simply responding to leading questions made to them by Inquisitors, who know about Dualism or Manichaeanism from literary sources. The medieval Manichee was wholly a modern myth.

I strongly disagree with view (ii), although I hugely admire the critical skills of these historians of the Middle Ages, and their ability to interrogate documentary sources: they are careful and cautious.  Even so, I think that they neither know nor care much about the theological content of the views they are discussing. Nor, much more significant, do they appreciate the radicalism of the views that accused heretics express quite spontaneously, without the slightest coercion. And these recent historians do not acknowledge the quite clear evidence of contact between distant regions, and particularly between Western Europe and the indisputably powerful heretical movements of the Balkans – especially the Bogomils, who feature at best only tangentially in the books of Pegg and Moore.

Actually, I agree that “Manichaean” is not a terribly useful label for these medieval heresies, which did not in fact draw on the lively mythological world of the Manichaean faith, nor did they use its scriptures. But we can rather see continuity in terms of an intermingled group of very early traditions dating back to apostolic times, each of which in its particular way posited a total Dualistic conflict between the material and spiritual worlds, and demanded that true Christianity meant cleaving to the spiritual. These strands would include:

*Docetism, the idea that the Christ who appeared in the world was an illusion rather than a material reality;

*Encratism, the rejection of sexuality, and of meat and wine;

*Marcionism, the belief that the God revealed in the New Testament was a radically different being from that of the Old.

*We also find an inheritance from Gnosticism, which attributed the material creation to a dreadful blunder, a lapse into ignorance and sin. The world was ruled by a defective God, and Christ was our only hope of achieving liberation.

However we label those views – whatever “-ism” we give them – they commonly existed together as an identifiable and highly consistent package, a Dualist synthesis that can be summarized thus:

The visible material world was created by Satan, who also created Adam and Eve, and who inspires the continuation of the human race. Conception and birth are tools of the Devil. Mary was an angel, rather than a human woman, and Jesus was not born from her in any conventional human sense. The Crucifixion and Resurrection both occurred only as illusions rather than material realities. As Satan is the God of the Old Covenant, true Christians must reject the Old Testament and its prophets. Christians should also reject other material symbols, including the water of baptism, the sacrament of the Eucharist, icons, relics, and the cross. They must spurn the cult of saints and the Virgin. The institutional church and its liturgy are diabolical, and contrary to the wishes of the true God, who sent Jesus to enlighten and free the world.

Manichaean, no: Dualist, definitely. And the “package” was very widespread. Especially common on the eastern fringes of the Roman Empire in Late Antiquity, it subsequently appeared all over Europe, both east and west. This was the belief system that united Paulicians, Bogomils and Albigensians – over a span of eight hundred years! Medieval writers tracked the movement back still further, to the fourth century heresies of the Messalians and Euchites. 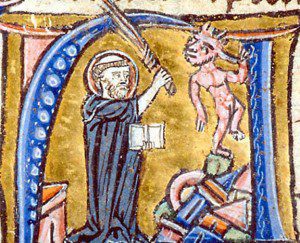 Nor are we dealing solely with clandestine subterranean movements living in perpetual fear of orthodox inquisitors. Radical and wildly unorthodox Christian sects dominated whole territories, even in the heart of Europe itself. And there were whole European nations where contemporary outsiders genuinely did not know whether established churches were teaching standard orthodoxy or gross heresy. In cities and villages, we find alternative institutional networks that often amounted to parallel churches, with national and international ties. These underground churches existed over several centuries, using their own secret codes and languages.

We might well ask: how many churches existed in medieval Europe? Dare we think of them in the modern sense as competing denominations? And heretical ideas remained in constant dialogue with what we think of as mainstream Christianity, cropping up among bishops and clergy of the established churches, to say nothing of the ordinary faithful.

We can trace direct connections between alternative/heretical movements of the twelfth or thirteenth centuries and the very earliest ages of the church. Although colleges and seminaries teach that the great heresies were wiped out in the fourth and fifth centuries, these doctrines never ceased to surface in the high Middle Ages and later.

Oh, and one final question. Those Dualists confidently thought of themselves as Christians, just as assuredly as the orthodox ruled them out of the faith. Yes, Dualists were certainly a long way from orthodoxy, but should we still grant them the Christian title nevertheless? And who decides?

May 26, 2013 MAMELUKES AND JANISSARIES
Recent Comments
0 | Leave a Comment
"Dr. Jenkins, sorry for commenting late, but I believe that many formerly nominal Christians are ..."
Tony Towards 2070: Is The Future None?
"This is excellent! Extremely useful to me : many thanks!You will almost certainly be quoted ..."
Robert LIMB Why A Founding Father of Communism ..."
""Radical" Republicans who were "radical" because they promoted equal rights for black people. You have ..."
Iain Lovejoy Call It What It Is: On ..."
"Only by calling it by its name can we move past it as a nation ..."
Marla Hughes Call It What It Is: On ..."
Browse Our Archives
Related posts from Anxious Bench