How does God still speak?

Until recent decades at least, nearly all Americans have believed in an unchanging God, “the same yesterday, today and forever.” If God does not change, does God’s manner and rate of revelation change over time?

Typically, those who have wrestled with the issue of canon in the history of American religion have made only crude differentiation among different groups. In colonial America, there were the Quakers and nearly everyone else. In antebellum America, things became a bit more complex, but there were Shakers, Mormons, and a cluster of prophets on the one hand and “Bible alone” anti-creedal evangelicals on the other extreme. Toss in Emerson and Thoreau. 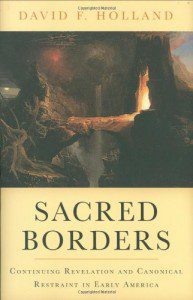 Enter David Holland’s eloquent and intelligent Sacred Borders: Continuing Revelation and Canonical Restraint in Early America. For anyone who teaches in the field of American religious history, this is essential reading. It should assume a venerable place on graduate school exam lists. However, Sacred Borders has just as much to offer pastors, Bible study leaders, and, well, frankly, any Christian willing to think deeply about the ways that American Christians have understood revelation and scripture. Start clamoring for Oxford University Press to release a paperback edition of the book!

Holland’s argument is extended and detailed; it eludes simple summary. The subtitle of the book points to its breadth. He brings into conversation and contest both those whose belief in ongoing revelation threatened (sometimes mildly, sometimes obviously and severely) a closed biblical canon and those who answered such threats and policed the canon’s borders. What I realized while reading Sacred Borders is that many, if not most, Christians believe in at least enough continuing revelation to pose some sort of threat to a strictly closed canon. At the same time, nearly all who challenged the closed canon maintained some sort of belief in canonicity; indeed, many pulled back from the logical conclusions of their ideas out of a traditionalist respect for the Bible. Along the way, Holland engages the early Puritans, Quakers (from George Keith to Elias Hicks), deists, Jonathan Edwards, prophets (such as Nimrod Hughes), Swedenborgians, Shakers, Mormons, Adventists, Unitarians, Transcendentalists, and more. Holland describes some figures as inhabiting a canonical “borderland”; it seems to me that many individuals were in more of a borderland than they knew.

Before proceeding with Holland’s argumentation, let me give you a sample of the many pleasant surprises included in his narrative. In 1811, Nimrod Hughes published a pamphlet about a visionary experience he had sitting in a jail cell. His vision led him to believe that God would destroy one-third of the earth’s population on June 4, 1812. His Solemn Warning went through five editions and caught the attention of former presidents John Adams and Thomas Jefferson, who discussed both Hughes and a mixed-race prophet named Christopher McPherson. Adams told Jefferson that modern prophecy was “unphilosophical and inconsistent with the political Safety of States and Nations.” Jefferson, architect of religious freedom, told Adams not to worry about McPherson. However, he quoted Jeremiah to the effect that “every man that is mad, and maketh himself a prophet, thou shouldst put him in prison and in the stocks.” Adams looked up Jefferson’s verse and agreed, telling the sage of Monticello that he “could not help wishing that the ancient practice had been continued down to more modern times and that all the Prophets at least from Peter the Hermit to Nimrod Hews inclusively, had been confined in the Stocks and prevented from spreading so many delusions and shedding so much blood.” Nimrod Hughes began a quick fade from American consciousness on June 5, 1812. The former prisoner certainly did not merit imprisonment because of his prophecies.

Hughes helps Holland make one of the central arguments of his book: theology matters. Ideas matter. It would be tempting, he writes, to explain Hughes away through the context of the brewing war with Great Britain. “A fiery two-tailed comet in the sky,” Holland writes, “wars and rumors of wars, a frightened and backward-looking populace, and a fanatic ready to make the most of their fear. What more do we need to know?” A great deal, it turns out. As it happens, Hughes wrote his pamphlet prior to the comet and prior to the war. Instead, Holland argues, Hughes tapped into a “long-standing biblical tradition of prophetic revelation [rather] than into any passing events.” “Belief that God had ever spoken, Hughes reasoned, must be open to the idea that He would speak again.” Indeed, throughout Sacred Borders, Holland warns scholars not to reduce religious phenomena to simple social explanations at the risk of ignoring longstanding religious traditions (in this case, centuries of debates about the biblical canon). He finds that concern about the canon was a constant in American religious history through the antebellum period. The question of canon was always timely, and he argues that Thomas Paine and Ethan Allen thought about God and the Bible as much as “any of their evangelical contemporaries.”

Even more remarkably, to my eyes at least, Holland offers an always necessary reminder (for scholars) that to the individuals about which he writes, God was a presence, a real presence. God was a benevolent Father to liberal Protestants (and many others), a “God of universality” and reason to deists, etc. “God sat at the center” of debates about the canon, Holland reminds us. “Arguments from the Almighty’s character,” Holland informs, “and what strikes me as a genuine impulse to know Him, really do appear as the primary engines of the canonical discourse.” What should historians do with this realization, which Holland says came to him as a surprise? “The most difficult question for historians engaging a religious past is what to do with God.” The answer to me seems simple. If we want to understand Jonathan Edwards, Joseph Smith, Horace Bushnell, and Ellen White, we have to take their quest for God’s presence, voice, and spirit seriously.

It would turn this post into a very long review for me to explain Holland’s concise summaries of how his many subjects approached issues of scripture and revelation. So read the book! However, it’s worth noting that Holland engages in no cheap shots. He takes his thinkers and their religious quests seriously, partly because they all in many ways inhabited the same intellectual world. For example, Theodore Parker clarified Proverbs 29:18 with brackets: “‘Where there is no vision [revelation] the people perish.” The Shaker Frederick Evans made the same point with dashes: “‘Where there is no vision’ — revelation — ‘the people perish.'” Transcendentalists, Unitarians, Shakers, Mormons, and evangelicals all wrestled with many of the same issues.

Now, one could read this book simply to become familiar with many of the leading theologians and religious leaders of pre-Civil War American history. I also recommend it, however, because it will help Christians be aware of the complexity of issues surrounding their canon. If the canon is closed, why? How do we know? What sorts of ongoing revelation threaten a closed canon? If the canon is open, if reason or intuition or visions have as much or more weight than scripture, how could Christianity (or any religion) maintain an essence or an anchor? Why did God give Christians the Old and New Testaments and not give sacred books to other peoples? Why has God stopped giving human beings scripture?

Why do these issues bedevil Christians more than, say, Muslims? One answer goes back to the emergence of Christianity:

the reality was that the composite canon sat at the very center of Christian identity: Christianity existed precisely because at one particular moment in history a small sect of heretics believed that — though God had not spoke since the closing verses of Malachi were penned — the scriptural canon was not yet closed, and that a new covenant was possible. American Primitivists may have been fueled by a belief in the Bible’s utter completeness and timelessness, but if they pushed their primitivism far enough they found themselves back into a moment when apostles could introduce new directives and difficult doctrines with the stroke of an epistolary pen. Change and tradition were thus interwoven in the Book from which so many Americans took their cues.

Christians reopened the scriptural canon, and mostly closed it again. No wonder some Christians are always trying to crack that door open once more.

May 17, 2013 THE GOSPELS OF ISLAM
Recent Comments
6 Comments | Leave a Comment
Browse Our Archives
Related posts from Anxious Bench