I have been posting recently about the survival of the so-called lost gospels into the Middle Ages and beyond. When scholars discuss these texts, they pay special attention to the so-called Jewish-Christian gospels as precious survivals of the earliest Jesus movement. Actually, this Jewish-Christian tradition can also tell us a great deal about how we got our present standard texts of the canonical four gospels.

According to a common interpretation of Christian origins, most of Jesus’s first followers saw themselves primarily as Jews, who faithfully followed Jewish ritual laws including the food laws and circumcision. Within a couple of decades, though, Gentiles were admitted without the need to accept these demands and these newer believers gradually played an ever-larger part in the church. Those who followed Jewish ways were marginalized, and even labeled as a heretical movement, the Ebionites. (There is an excellent summary of the available evidence in A. F. J. Klijn, Jewish-Christian Gospel Tradition (1992), and see now the recent book by Petri Luomanen, Recovering Jewish-Christian Sects and Gospels).

From the second century, we hear of gospels that appealed particularly to this wing of the movement, works variously named after the Ebionites, the Hebrews, or the Nazoreans/Nazarenes, and some at least circulated in Semitic languages and script. None survives in anything like intact form, nor can we be sure just how many works were covered under these various titles. Jewish-Christian texts appear only in fleeting form even in the first few Christian centuries. Mainstream church Fathers often refer to them as things they have heard of but not actually seen, and they often quote them inaccurately. Presumably, such scarce texts would stand little chance of surviving into the Middle Ages, all the more so if their content was so radically contrary to emerging Christian orthodoxy.

Surprisingly, though, references to Jewish-Christian gospels do indeed appear sporadically throughout the Middle Ages, and not just in the Syriac-speaking churches of the Middle East. Irish scholars claimed access to some such documents, under names like the Gospel of the Hebrews. Almost certainly, it was through Irish sources that medieval writers had access to other Jewish-Christian gospels, which they refer to so startlingly through the fourteenth century and beyond. In whatever form they might have existed, these mysterious gospels had a very long afterlife.

Just what these “Jewish-Christian” readings were raises serious questions about the transmission of the gospel text. Orthodox church scholars cite them as the products of a heretical school of belief, labeled by a sectarian name like “Ebionites.” But looking at the readings in detail, it is an open question whether a sect added these words themselves for their own purposes. Or, more intriguing, were they preserving the oldest textual reading, which later dropped out of the canonical gospels?

Repeatedly, we find that readings commonly dismissed as belonging to that marginal Jewish-Christian school reflect the gospel text as it would have been known to such venerated Fathers as Ignatius (c.110), Justin Martyr (c.160) or Tertullian (c.200). Often, scholars assume that the writers in question were confused in their memory of the exact wording of the text, but some readings occur so frequently that they seem to have been standard at this very early time. Besides the Jewish-Christian texts, some also appear in such early gospels as Peter and Thomas.

Tellingly, these alternate readings also appear in the Diatessaron. This was a harmony or synthesis of the four gospels composed in Greek by the Assyrian scholar Tatian around 170, and possibly based on a still earlier compilation by Justin Martyr. Tatian of course collected the gospels in the form in which he knew them at the time, and that often differs from the standard forms that came down to us later. It is just possible that he also used a fifth and presently unknown gospel, over and above the four.

Here are a couple of examples from many. (My discussion here draws heavily on the classic work by my former colleague Bill Petersen, especially his 1994 book on Tatian’s Diatessaron)

When John the Baptist baptized Christ in the Jordan, our canonical gospels tell us of a divine voice and the Holy Spirit descending. In the fourth century, the “Hebrew Gospel” used by the Ebionites knew a lengthier account, in which a “great light” (or perhaps “fire”) shone in the Jordan at this epochal moment (Matthew 3.15-16). 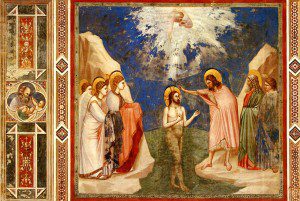 But although that is cited as a heretical “Hebrew” peculiarity, it has a lengthy track record in the mainstream church. Justin in the mid-second century had cited the fire burning in the Jordan on this occasion, and the same idea appears in the Sibylline Oracles of roughly the same date. We can also turn to manuscripts of the Old Latin tradition, that is, translations that were made before Jerome’s Vulgate of the fourth century. Two Old Latin manuscripts speak of the bright light on the baptismal water with no sense that they were drawing on any weird or marginal sect. The Diatessaron also preserved the “great light” reading, which appeared in the many later works that cited or adapted it.

Again, when Jesus appears to his disciples after the Resurrection, our familiar text quotes him as assuring them that he can’t be just a spirit (pneuma: Luke 24.39). Early Jewish-Christian gospels used the phrase “a bodiless daimon,” or (sometimes) phantasma.  But Ignatius uses the daimon reading without comment, while Tertullian used phantasma. Phantasma is the form in the “Western” Gospel text tradition. The Diatessaron used the same word, and through that work, it was passed on through medieval texts in multiple languages.

The point of all this is that many of the early or fringe gospels matter enormously, not because they preserve any great hidden secrets about Jesus or his time (Jesus’s Wife, anybody?) or indeed any revelations about the early church. Rather, they preserve some readings that, once upon a time, were widely received among leaders of the mainstream church, the Great Church. Only gradually, in the third and fourth centuries, were they consigned to the heretical fringe.

None of these readings have any grand implications for Christian faith or doctrine. But they do suggest a complicated process of interactions between mainstream and margin in the definition of the standard New Testament text.

Just as an intellectual exercise, just imagine that we had a copy of the gospels as they existed in Rome or Antioch around 160, exactly as they would have been available (say) to Justin Martyr. Now imagine further that a copy of this same text somehow fell into the hands of a Christian scholar two or three centuries later. What would they make of it? Noting the many differences from what had become the standard text, is there any doubt that they would have condemned this mysterious document as some version of a Jewish-Christian gospel?

At least in some cases, when scholars like Epiphanius talked about Jewish Christian gospels – when they gave these documents some name like the Gospel According to the Hebrews – were they actually dealing with nothing more heretical than very early drafts of what became our canonical texts?

May 7, 2013 "An Army of the Living God": Stonewall Jackson's Death and Southern Memory
Recent Comments
7 Comments | Leave a Comment
"This is a good historical analysis which deals with very complex issues that have influenced ..."
Ralph Weitz Can Northern Evangelical Institutions Survive Evangelicalism’s ..."
"Well, I'd say the version of feminism that says, "A woman without a man is ..."
NorrinRadd It’s a Small, Small Complementarian World ..."
"It seems to be common that the publishers of these various Comp. sites lack the ..."
NorrinRadd It’s a Small, Small Complementarian World ..."
"Independents are just lazy and ignorant, especially of economics."
Roger McKinney Neither Democrat Nor Republican: The New ..."
Browse Our Archives
get the latest updates from
Anxious Bench
and the Patheos
Evangelical
Channel
POPULAR AT PATHEOS Evangelical
1