From earliest times, Christians have produced an abundance of alternative or pseudo-gospels, usually with a view to giving a scriptural basis to some particular doctrine. On occasion, though, we find anti-gospels, versions of the familiar narrative intended to challenge or disprove mainstream Christian assumptions. Muslims, for instance, have long favored the Gospel of Barnabas, in which Jesus explicitly foretells the coming of Muhammad, and acknowledges his prophetic status.

Another anti-gospel stemmed from Jewish sources, and it enjoyed a very long career. This was the scabrous Toledot Yeshu, a frontal attack on every tenet of Christian faith. An angry and bitter work, it should properly be classified as hate literature. If you countered that this Jewish work was a paltry contribution compared to the flood of vicious anti-Jewish propaganda produced by Christians through the centuries, I would entirely agree.

Because the Christian church was so bitterly hostile to the Toledot Yeshu, it circulated underground, and much about its origins remains uncertain. Fortunately, we now have an excellent collection of essays on the topic, stemming from a conference held at Princeton in 2009 (This is Peter Schäfer, Michael Meerson and Yaacov Deutsch, eds., Toledot Yeshu (“The Life Story of Jesus”) Revisited, Mohr Siebeck, 2011).

Taking these erudite studies together, we can say that the Toledot is almost certainly later than the sixth century, because it describes Christian customs and festivals that could not have originated before that time. But it cannot have been written much after the ninth century, because that is when Christian clergy began denouncing the tract in shudders. Although banned in the Christian world, it was popular in medieval and Early Modern Jewish communities, and manuscript copies survive in large numbers. 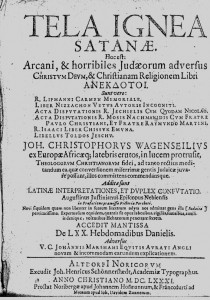 The “Life” takes the form of a gospel in that it covers the same general ground as one of the canonical Big Four, although inverting every significant element in the story. It begins with a virtuous woman named Miriam, who was betrothed to the noble Yohanan, a descendant of David. However, Miriam attracts the lustful attention of the vile Joseph Pandera, who seduces her by disguising himself as her husband. Their offspring was Jesus. Discovering the truth, Yohanan flees in horror.

The Pandera story has an ancient pedigree. As early as the second century, Jewish and pagan critics of Christianity argued that Jesus was not the son of a virgin, parthenos, but rather of a man called Panthera, perhaps a Roman soldier. The point here is rhetorical. Jesus was the son of a seducer, and he would seduce many of the people of Israel to an abhorrent new faith.

Jesus launches his mission, with his extravagant messianic claims, supported by genuine miracles. He owed these powers to having entered the Temple and read the secret name of God on the Foundation Stone. Later, Jewish authorities commissioned another man called Iskarioto to learn the same letters and thereby gain the same powers, helping to discredit Jesus. Without his occult powers, without the Divine Name, Jesus could be arrested and crucified – on a cabbage stalk (!)

After Jesus’s death, a gardener stole and hid his body, giving rise to stories of a Resurrection. It was however recovered and taken to the Queen, Helena, tied to the tail of a horse.

Jesus’s followers remained faithful, however, and spread their message throughout the world. This began a period of thirty years of conflict between Jews and Christians. The strife was resolved only through the machinations of a man called Simeon Kepha, who also accomplished miracles through the power of the Divine Name. This Simeon is better known, though under another name, which was – not, as Christians might think, Simon Peter, but rather Paul.

You would be rash indeed to seek any hints of historical truth in this farrago, although some modern scholars have tried to do so. The book is chiefly of interest in suggesting some of the rival views of Jesus circulating long before the modern era. It also makes us ask just what other alternative views might have existed, if we were able to excavate below the layers of church censorship. Portions of the Toledot story certainly date back to the early Christian centuries, and surface in the works of Celsus, Justin Martyr and others. We can only speculate how many other counter-stories might have these primitive origins.

Incidentally, one point to emerge from the Princeton essays is the relation between the Toledot and alternative Christian texts. This is not just a case of Jewish scholars creating a blasphemous parody of the four canonical gospels. Rather, they seem to be drawing on a range of earlier lost gospels and folk-tales, some Gnostic or Jewish-Christian, and some of which influenced the accounts of Mary and Jesus in the Qur’an.

The Toledot Yeshu had its greatest impact on wider affairs in the sixteenth century, when it came to the attention of German scholars, including Martin Luther. Luther especially was horrified, and the discovery further strengthened his hatred of all things Jewish. His writings on the subject would have a long and hideous afterlife.