It’s hard not to like the Jesus Movement, but until recently, there wasn’t a good history of this revolutionary moment in the evolution of American evangelicalism. Now, there is. Larry Eskridge’s God’s Forever Family is a book you should read.

I recently reviewed the book for Christianity Today. A number of years ago, I became interested in the Jesus Movement through Campus Crusade for Christ’s Explo ’72 evangelism and missions event in Dallas. CCC’s founder, Bill Bright, had been absolutely repulsed by long hair and rock music. By 1972, however, he set his personal feelings aside and invited the culture of the Jesus Movement to what became a transformative event in the life of many Americans. See here for one example. 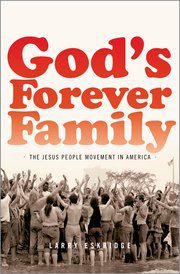 By the time it hit Explo, the Jesus Movement had lost some of its rougher edges, and its culture had clearly penetrated into a wider segment of young evangelicalism. The early years, however, were absolutely wild and spontaneous:

Eskridge begins his story in the Bay Area, the birthplace of both the counterculture and the Jesus Movement. Skillfully capturing the cultural and intergenerational tension among the Christians of this era, he introduces Baptist pastor John MacDonald and a young hippie couple, Ted and Elizabeth “Liz” Wise. Liz attends MacDonald’s church “while coming down from the previous night’s acid trip.” Eventually, her excitement about Jesus proves contagious to her philandering and oft-stoned husband. Soon, he was telling his fellow joint-smoking friends, “Jesus is my Lord.” Then Wise went to MacDonald’s church and told the congregation, “He is back.” Wise did not explain what he meant by that statement, other than to share that the Lord had told him to tell it to everyone he met. The new convert made both the hippies and the straitlaced Baptists equally uncomfortable.

Many evangelicals had decisions to make. Would they embrace these new hippie Christians who might soil church carpets and drive strait-laced older members out of congregations? Some fundamentalists were absolutely appalled at the styles of dress and hair they observed at Explo ’72. In the end, though, the Jesus Movement (and the broader cultural changes brought about by the late-sixties) loosened up American evangelicalism. It became casual and adopted new forms of music.

What struck when reading Eskridge’s account is the simple sweetness of many Jesus Movement participants (not that there aren’t self-interested wolves in this book as well): an innocent and fervent love of Jesus and a desire to put scripture into practice. If only that sweetness could have been bottled:

We could use some fresh surprises. “I’m fifteen and I want the Jesus Movement again,” says a young girl, quoted by Eskridge, who watched a video about the movement and who had heard about it from her parents. Thanks to Larry Eskridge, the Jesus People finally have a rich, documented history of their own. Perhaps it will help inspire another generation of young evangelical activists and another generation of straights willing to take a few chances on them, willing to once again sing—in Larry Norman’s words—”a sweet, sweet song of salvation.”

July 16, 2013
The Long History of the Religious Right
Next Post