The Long History of the Religious Right

The Long History of the Religious Right July 16, 2013 Miles Mullin

Ever since so many of them embraced the Reagan Revolution during the 1980 election cycle, the political involvement of evangelicals has garnered the attention of scholars and journalists.  For many, the story of resurgent evangelical political involvement became one of backlash.  Reacting against progressive politics and loosening social mores of the 1960s, evangelicals embraced a conservative political agenda in order to “save America.”  In the late 1970s, this meant joining the Reagan Revolution in order to usher Jimmy Carter and his progressive allies out of office.

In fact, many factors commend this interpretation.  Initially enamored with candidate Jimmy Carter due to his evangelical bona fides (he unashamedly claimed to be “born again”), many evangelicals grew frustrated with his progressive social positions and policies.  This frustration, in turn, became the foundation upon which Jerry Falwell built the Moral Majority beginning in 1979.  The same year, Beverly LaHaye launched the anti-feminist, anti-ERA, pro-life group Concerned Women for America.  And the following year (1980), evangelical discomfiture with certain developments at President Carter’s White House Conference on Families became the seedbed for the emergence of the Family Research Council, incorporated in 1983.

In 1989, Pat Robertson and Ralph Reed launched The Christian Coalition — a semi-successor to the Moral Majority–upon the heels of Robertson’s unsuccessful 1988 bid for the Republican Presidential nomination.  The Coalition produced voter guides that steered many evangelicals to cast ballots for pro-family candidates in national elections.  Most (but not all) of those candidates were Republicans.  By the mid-1990s, the vast majority of evangelicals had become fairly reliable Republican “values voters,” playing important roles in the Gingrich Revolution of 1994 and the electoral victories of George W. Bush.

Coming on the heels of the cultural upheaval of the 1960s, this sequence of events certainly can be fitted into a backlash narrative.  Many interpreters have chosen to explicitly (or implicitly) embrace that paradigm in order to explain the rise of the Religious Right.  Recently, however, a new trend has emerged.

Mirroring the recent trend in Civil Rights history which examines the “long Civil Rights movement,” newer works on the history of evangelical political engagement are embracing a longer view of the emergence of the Christian Right.  The seeds of this interpretative shift could be seen in the first edition of William Martin’s With God on Our Side, released in 1996 as a companion piece to six-episode PBS documentary of the same name.

More recently, other works have embraced this interpretation more explicitly.  Daniel K. Williams’ God’s Own Party:The Making of the Christian Right briefly reaches back to the 1920s, demonstrating how evangelicals possessed a history of political involvement that manifested itself as G.O.P. partisanship in the late twentieth-century.  Building on Lisa McGirr’s Suburban Warriors: The Origins of the New American Right, Darren Dochuk’s exhaustively-researched From Bible Belt to Sun Belt: Plain-Folk Religion, Grassroot Politics, and the Rise of Evangelical Conservatism engages in deeper analysis.  He traces the manner in which developments among Southern plain-folk Christians democrats displaced to Southern California in the 1920s and 1930s ultimately fueled the anti-labor, pro-free enterprise Reagan Revolution that enveloped evangelicals nationally.

Both Axel Schäfer’s Countercultural Conservatives: American Evangelicalism from the Postwar Revival to the New Christian Right and Moral Minority by David Swartz (the best book on evangelicals who did not become reliable Republican voters by the mid-1990s) also embrace a longer view of the 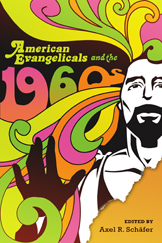 rise of the Religious Right.  Next month, The University of Wisconsin Press will release American Evangelicals and the 1960s, a collection of essays edited by Schäfer that likewise aim to correct the backlash thesis.  Matthew Sutton’s new reader, Jerry Falwell and the Rise of the Religious Right: A Brief History With Documents, also adopts the longer view, although in centering the volume around Jerry Falwell it simultaneously give credence to the the older interpretation.  Some recently published books, such as God’s Right Hand: How Jerry Falwell Made God a Republican and Baptized the American Rights by Michael Sean Winter, continue to promulgate the older view more explicitly.

In my estimation, the history of the emergence of the Religious Right is a complicated one.  Without a doubt, the Moral Majority and other groups helped usher many evangelicals in the world of partisan politics at a particular moment in American political history.  Thus, focusing on that period of time as a seminal era remains valid.  It addresses the historical question: why now?  At the same time, the longer view helps provide context, which always aids in historical understanding.  By seeking to understand the history of evangelical political activity in America prior to the 1970s, we garner valuable information that would have eluded us otherwise.  Specifically, we garner information regarding the variety of evangelical political action, and the manner in which evangelicals shaped and were shaped by other movements (and moments) in American history.

July 16, 2013
The Historical Genius of Edmund Morgan
Next Post

July 18, 2013 The Jesus Movement
Recent Comments
16 Comments | Leave a Comment
Browse Our Archives
get the latest updates from
Anxious Bench
and the Patheos
Evangelical
Channel
POPULAR AT PATHEOS Evangelical
1