I recently read Rod Dreher’s remarkable book The Little Way of Ruthie Leming. My expectations for the book were extremely high, as the near-universal praise of reviewers has been effusive, and Dreher is one of my favorite bloggers and writers. Reading his earlier book Crunchy Cons was uncanny: it explained a great deal of me to myself (why do my wife and I – evangelicals, Baptists, and conservatives – belong to a community-supported agriculture co-op??). The Little Way is a very different book, in which Rod Dreher explains Rod Dreher to himself. But it did not disappoint. Before I say anything else, let me get to the crux of my review: read this book as soon as you can. I have not read a more compelling, thought-provoking (contemporary) book in some time.

Some of you may know the Dreher family’s story from his blog or from other reviews, such as one at Patheos by Amy Lepine Peterson: as Dreher and his family endured the tragic death of his beloved sister Ruthie from cancer, they decided to move back to Rod’s hometown of St. Francisville, Louisiana. It was a move for community and love of family. They wanted to help raise Ruthie’s daughters in her absence, and to help take care of Rod’s aging parents. They wanted to dwell among the remarkable family and friends who rose up to bless and honor Ruthie as her health declined. Although they had made friends in the big cities of Dallas and Philadelphia, they had found no community like St. Francisville.

Not that Dreher paints a rose-colored picture of his hometown, or even his relationship with his sister, which was loving but fraught with classic tensions between the carefree, self-sacrificing sister who devoted her life to that hometown, and the bookish, angst-ridden brother who could not wait to get out. That tension is one of the critical themes of the book: our culture celebrates the global, the technological, the place-less. But life in community – the kind that brings comfort when you’re dying of cancer – requires place, history, family, and settledness. Settledness that sticks even in the midst of frustration and despair.

This is the first main lesson of The Little Way: the importance of making decisions for place and community. I have now lived in Waco, Texas, for eleven years, and it is the longest I’ve ever lived anywhere (we moved a lot when I was growing up). We’re just starting to feel like we’ve got a few roots here. Reading this book made me appreciate the value of having been in a church for eleven years, a house for eleven years. It’s made me think about the prospect of my children growing up in the same place their whole childhood, and having a place that is, without question, their “hometown.”

The second main lesson is the purposefulness of suffering. Ruthie’s death was shocking and incredibly painful – spiritually, emotionally, and of course physically – and Dreher does not hold back in his depictions of how his family grieved through her travail. (I defy anyone to read this book without weeping repeatedly.) But good things came out of her death, including charity, blessing, and reconciliation, that would not have happened otherwise. If you, like me, have experienced unexpected death in your family, you will find this book phenomenally helpful and redemptive.

I hesitate to raise any critical questions about the book, but I do think that some readers will find aspects of The Little Way unsatisfying. Most notably, the church, and the specifics of Christian belief, are very much in the background, and in a book on death, that is a little troubling. Perhaps the tension has to do with me being an evangelical, Rod being Orthodox (an adult convert), and Ruthie being United Methodist. Nevertheless, some Christians reading the book may realize that while they do not live in their hometown or have a tight-knit kin network, they have found true community, perhaps the most authentic community of all, in the ekklesia, among the called-out ones of the church.

I think of wandering Abraham, who left his home and lived in tents in the promised land because “he was looking forward to the city that has foundations, whose designer and builder is God.” [Heb. 11:10] That’s the permanent hometown. Any place can feel like home if you have a good church. But this is not a either/or proposition – being rooted in your church and your broader earthly community are hardly exclusive.

Also, while remarkable spiritual experiences and divine manifestations populate the book (again, some Protestant readers might get nervous!), Dreher almost celebrates the non-theological, practical orientation of Ruthie’s faith (a faith which was clearly substantial and marked by spiritual fruit in the form of relentless acts of mercy, service, and charity). Some will wince when Rod describes her convictions this way: Ruthie “believed God existed, and loved us, and wanted the best life for us, though not necessarily the easiest life. That was all Ruthie knew about God, and all she wanted to know.” I suspect this is not literally true – did she read the Bible, or know and believe the Apostles’ Creed? God has made himself known to us, through the Word and the incarnation of Jesus. Not wanting to know more about God, then, is a bad thing. Doctrine and practice are not at odds in biblical Christianity.

But I quibble. Read this book – read it with a friend or family member. You’ll want to live differently when you do.

August 21, 2013 "Welcome to the Multicultural Church"
Recent Comments
2 Comments | Leave a Comment
Browse Our Archives
get the latest updates from
Anxious Bench
and the Patheos
Evangelical
Channel
POPULAR AT PATHEOS Evangelical
1 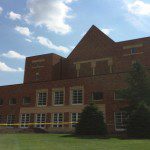