Peter Leithart’s landmark book Defending Constantine (2010) sharply rebuked Christian pacifists. Leithart clearly intended to do more than rehabilitate the reputation of Constantine, emperor of Rome in the fourth century; this project was also a polemic against Mennonite icon John Howard Yoder. In its most grave charge, Defending Constantine accuses Yoder of doing bad history. Roger Olson puts it colorfully: “[Leithart] frequently treats Yoder as some kind of Anabaptist nincompoop who ignorantly plays fast and loose with facts.” Specifically, Leithart contends that there was no “Constantinian shift” from New Testament pacifism to a Christendom willing to use violence to exte 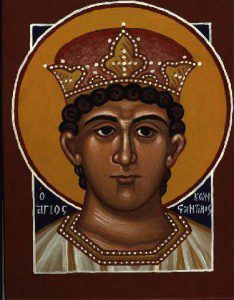 nd both the Church and state. Yoder’s case, Leithart contended, rested on an Anabaptist “fall of the church” historiography that mistakenly assumes that the early Church was pacifist in the first place. Among his arguments: that there was interest in Christian empire before Constantine; that his pursuit of justice helped maintain the rule of law and the protection of Christians and the poor; and that he helpfully elevated Christians to positions of political responsibility.

Other scholars have been pursuing a similar, if less pugnacious, line of argumentation. David Hunter, for example, has been championing a “new consensus” that accounts for both pacifist and non-pacifist positions. He suggests that early Christians were as repelled by the idolatry of the Roman State as much as its violence; that there is evidence that some Christians were diverging from a uniform pacifist stance by the end of the second century; and that stances on warfare varied according to geography (antimilitarism, for example, was strongest among Christians in the heart of Rome; it was weakest on the borders). Many Christian crusaders and just-war theorists have cheered on Leithart and Hunter, pleased that scholars with theological and historical chops were substantively critiquing Yoder. 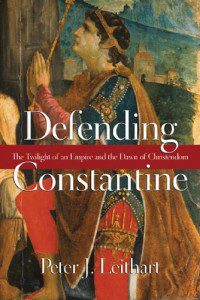 The rebuttal to Leithart is on. The book immediately sparked lively conversations online here and here and here and here. The October 2011 issue of Mennonite Quarterly Review offered quick and substantive responses from four critics. John Nugent argued, in a theological vein, that God calls his people away from imperial identities—whether that is Roman, German, or American—to lives ‘of vulnerability, trust, and service to all those created in God’s image.” Alan Kreider offered a historical criticism, contending that Leithart’s sources on Christian participation in the military were sparse and questionable compared to evidence against involvement in state-sponsored violence. Constantine’s reign did indeed signal a fundamental shift: “from the gestalt of early Christianity to another gestalt—Christendom.” Responding in the same MQR issue to this battery of criticism, Leithart was unrepentant. “Because Christ is king,” he wrote, “kings should be Christians and exercise their earthly dominion in a righteous manner.” Leithart raised the stakes theologically. “The rub,” he declared, is that “we do not agree on the Gospel.” 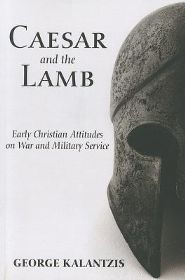 The debate continues as a small avalanche of books rolls off the press. Last year Ron Sider released The Early Church on Killing: A Comprehensive Sourcebook on War, Abortion, and Capital Punishment. Also in 2012 Wheaton professor George Kalantzis published Caesar and the Lamb: Early Christian Attitudes on War and Military Service. And now Goshen College’s John Roth, author of Choosing Against War, is releasing a more direct rebuttal of Leithart entitled Constantine Revisited: Leithart, Yoder, and the Constantinian Debate. It is an edited volume featuring an impressive lineup of Anabaptist theologians and ethicists including Stanley Hauerwas and Mark Thiessen Nation. Together, these books argue, in the words of Kalantzis, against “recent scholarship [that] accepts as axiomatic that there was ambivalence among the earliest Christians. . . . I do not believe that such a conclusion is borne by the literary evidence.” They marshal writings by Pliny the Younger, Justin Martyr, Athenagoras, Clement of Alexandria, Tertullian, Origen, Cyprian of Carthage, Lactantius, and others. Jesus Christ, they say, inaugurated “a new call to non-violence, unrecognizable by the culture around them, for it took the form of civil disobedience as the mark of a transnational community bound together with the bonds of baptism. A community that honored Caesar by disobeying his commands and receiving upon their bodies the only response a state based on the power of the powerful could meet—an imitation of Christ.” The bottom line: “With remarkably univocity they speak of participation in the Christian mysteries as antithetical to killing, and the practices of the army.”

And so it goes. Scholars will continue to assess complex historical records and debate theological arguments (see Preston Sprinkle’s Fight: A Christian Case for Nonviolence and Jeremy Gabrielson’s Paul’s Non-Violent Gospel). The debate hasn’t resolved in the three years since Defending Constantine—and won’t anytime soon. After all it has raged since Constantine himself, if not before.

* The video below features an appearance by Leithart and Kalantzis at Wheaton on November 16, 2011.

September 17, 2013
When the United Nations Did Good: Os Guinness and Religious Liberty
Next Post