Although the Book of Enoch was highly regarded in the early Christian church, it fell out of favor by the fourth century. From the ninth century, it virtually disappeared from European churches at least, and the text would be lost for a millennium. But the work proved surprisingly durable. Centuries after it was denounced by Church Fathers – especially Augustine – it continued to surface in surprising places and contexts. Enoch offers a case-study of the extreme difficulty of suppressing unpopular texts.

Europe, of course, was only one portion of the Christian world. The Ethiopian Church treats 1 Enoch as fully canonical, and has done so since early times. The book was likely translated into Ge’ez in the fifth or sixth centuries. The destruction of documents in medieval wars leaves much obscure about Ethiopian Christianity, but we know that it was influenced by both Coptic and Syriac traditions. The interest in Enoch could have come from either current, or from both. Once established in Ethiopia, though, 1 Enoch had a major impact on the nation’s cultural life, and was extensively used in other writings over the centuries.

1 Enoch continued to be known in other Asian and African Christian worlds. Probably in the ninth century, we have the fragment in the tomb of an Egyptian monk at Akhmim. In the twelfth and thirteenth centuries, we find Syriac writers like Michael Syrus and Bar-Hebraeus using 1 Enoch. (I am here using the work of Annette Yoshiko Reed). Through Syriac influence, Enoch spread its influence over neighboring countries like Armenia. Even when not quoting the Enochic writings directly, Enoch himself retained a strong popular reputation, so that new prophecies and apocryphal works were readily attributed to him.

But Enoch even survived for centuries in the Catholic and Orthodox worlds, long after its rejection by church authorities. In the ninth century, the catalogue attributed to the Patriarch Nicephorus cited Enoch (that is, 1 Enoch) among the Old Testament apocrypha. If not canonical though, the book did not disappear overnight. It was quoted by the Byzantine writer Syncellus around 800,in his Chronography, a kind of universal history. Syncellus agreed that 1 Enoch was “apocryphal, questionable in places” and “adulterated by Jews and heretics,” he still felt it was more reliable than the pagan historians. The book was still  used by Byzantine successors like Kedrenus through the eleventh century.

Presumably, 2 Enoch must also have been circulating in the Byzantine world through the ninth century at least, or it would not have been available for translation into the Slavonic language of that new missionary church. In turn, 2 Enoch influenced dissident movements like the Dualist sect of the Bogomils.

1 Enoch also circulated in the British Isles, in Ireland and Anglo-Saxon England. Modern scholars have found memories of the book in many incidental references from the early Middle Ages, and in artistic depictions. The great scholar Bede was well aware of the doubts surrounding Enoch’s authorship, but still did not want to see them rejected or suppressed “because that book which is presented under his name is considered not truly written by him, but edited by some other one under the title of his name.”

In England, in fact, Enoch had a curious and lasting cultural impact. I adapt the following from a column I wrote for realclearreligion:

The poem Beowulf appears to depict a primitive pagan world. This great poem tells of a village besieged by a terrifying monster called Grendel. The mighty hero Beowulf defeats Grendel, only to find that he must then combat a still more alarming enemy in Grendel’s mother. 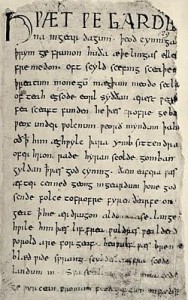 But let’s look at those names. “Grendel” makes some sense in terms of a thing that grinds, that crushes with its ferocious teeth, but logically the Anglo-Saxon name should be something like “Grendr.” So where did the “-el” part come from? Forty years ago, medieval scholars offered a surprising answer. Whoever composed Beowulf drew heavily on the Hebrew Bible, and more specifically, on 1 Enoch.

Genesis reports the sons of God mating with the daughters of men, and those monstrous hybrids fascinated later writers. In 1 Enoch, they become cannibals and giants, who sound very much like Grendel’s horrible family. 1 Enoch also delights in listing those giants and angels, whose names usually end with the Hebrew “-el.” So we have Ramiel, Danel, Asael… How natural then for a medieval writer to invent Grendel.

This is not a case of a medieval monk lightly editing an ancient poem by throwing in an extraneous reference to Christ or the Virgin. Grendel, under that name, must have been an integral part of the story from the beginning. The only conclusion, then, is that this whole poem was written by someone who had read Enoch, and in the context of the time, that must have been a Christian cleric, probably in the eighth century.

It would be easy to write a history of 1 Enoch noting that “the Church” (namely the Catholic and/or Orthodox Church) rejected its scriptural status by 400, and it disappeared from mainstream use. Clearly, though, it was read for perhaps four hundred years after that even within Europe, and much longer outside.

September 24, 2013 Paleo Evangelicals and the Plight of Prisoners
Recent Comments
0 | Leave a Comment
"We know that due to efficiency and innovation, the prices of some goods, in real, ..."
Dr_Grabowski Northern Baptists (Not Just the Southern ..."
"How is “the Christian right” synonymous with “churches?” Even churches that are recipients of ideologically/politically ..."
Dr_Grabowski Northern Baptists (Not Just the Southern ..."
"I’m seeing different numbers online, $3.3T for George W Bush, $6.8T for Obama and $6.6T ..."
Dr_Grabowski Northern Baptists (Not Just the Southern ..."
"“is the Student Volunteer Movement, a ministry much like ours. At its height, around 1920, ..."
Erp Cru, CRT, and the History of ..."
Browse Our Archives
get the latest from
Anxious Bench
Sign up for our newsletter
POPULAR AT PATHEOS Evangelical
1