PAPIAS AND THE MIRACULOUS VINES

Based on my study of Christian history, I offer a couple of strictly non-scientific impressions. The first is that the religion is more consistently weird in its expressions than we usually assume. Also, we can find a remarkable number of long-term continuities and connections, if we remain open to noticing them. And finally, any long-term exploration of such links has to travel a long way outside the familiar world of European Christendom.

To illustrate these points, let me use the words of a once revered figure in the early church. This was Papias, bishop of the major Phrygian city of Hierapolis, in what is now southwestern Turkey. Hierapolis was close to such early centers of Christian expansion as Colossae and Laodicea, and the cities addressed in the Book of Revelation. Hierapolis claimed some connections with the apostle Philip. 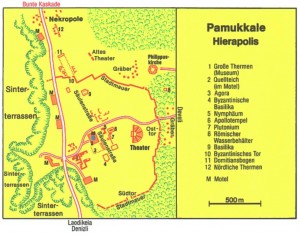 Papias served as its bishop in the second century, although scholars differ whether they would place his career closer to 100 or 150. Irenaeus called him a hearer of the evangelist John and a companion of the martyr Polycarp, and Papias himself reported a tradition that he had received from the daughters of Philip. Papias also wrote a crucially important (and now-lost) book on the origins of the gospels, which survives in quotes from later church Fathers (Eusebius, Ecclesiastical History, iii 39). Through contacts with the spiritual heirs and pupils of the apostles, he collected a sizable body of oral teachings attributed to Jesus and his first followers. In terms of church history, he was  an early witness, and a weighty and widely-connected one.

So critical was Papias to the church’s historical memory that it is amazing that he is not recalled as a pivotal Church Father, whose every writing should have been carefully preserved. However, he had the misfortune to hold chiliastic ideas, envisioning Christ’s establishment of a literal and material millennial kingdom on Earth (both chiliasm and millennial derive from the words for thousand, respectively in Greek and Latin). He may well have been reflecting views widely held in the mainstream church of his time. As the years progressed, though, he was retroactively labeled a heretic, and by the fourth century Eusebius dismisses him as a bumbler of small intelligence.

For present purposes, I focus on a specific remark of Papias, as quoted by Irenaeus around 180 – one of the incidental sayings that was believed to prove Papias’s heretical leanings. Relying on Papias’s fourth book, Irenaeus writes,

as the elders who saw John, the disciple of the Lord, related that they had heard from him how the Lord used to teach in regard to these times, and say: The days will come in which vines shall grow, having each ten thousand branches, and in each branch ten thousand twigs, and in each true twig ten thousand shoots, and in every one of the shoots ten thousand clusters, and on every one of the clusters ten thousand grapes, and every grape when pressed will give five-and-twenty metretes of wine. And when any one of the saints shall lay hold of a cluster, another shall cry out, ‘I am a better cluster, take me; bless the Lord through me.’ In like manner, [He said] that a grain of wheat would produce ten thousand ears, and that every ear would have ten thousand grains, and every grain would yield ten pounds of clear, pure, fine flour; and that apples, and seeds, and grass would produce in similar proportions.

He further reported that Judas had challenged these remarks, but Jesus replied, “They shall see who shall come to them.” 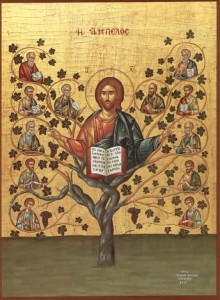 Papias’s words would obviously have an immense appeal in an agricultural society. But as many scholars have noted, they also have a deep historical background, particularly in the Old Testament Pseudepigrapha. As so often in these instances, we look first to the words attributed to Enoch. In 1 Enoch, we read that “each measure will produce a thousand, and each measure of olives will produce ten baths of oil” (10.19-20).

A much closer parallel appears in 2 Baruch, a Jewish text probably composed at the end of the first century, but which was widely used by Christians. Describing the messianic age, the book prophesies that:

The motif continued to circulate in the Christian world as well as the Jewish. In the third or fourth century, the Apocalypse of Paul (Visio Pauli) claimed to report the visions of heaven and Hell received by the apostle. In one section, the angel tells Paul that,

When Christ whom thou preachest cometh to reign, then by the decree of God the first earth shall be dissolved, and then shall this land of promise be shown and it shall be like dew or a cloud; and then shall the Lord Jesus Christ the eternal king be manifested and shall come with all his saints to dwell therein; and he shall reign over them a thousand years, and they shall eat of the good things which now I will show thee. And I looked round about that land and saw a river flowing with milk and honey. …. And the trees were full of fruits from the root even to the upper branches. …. From the root of each tree up to its heart there were ten thousand branches with tens of thousands of clusters, [and there were ten thousand clusters on each branch,] and there were ten thousand dates in each cluster. And thus was it also with the vines. Every vine had ten thousand branches, and each branch had upon it ten thousand bunches of grapes, and every bunch had on it ten thousand grapes. And there were other trees there, myriads of myriads of them, and their fruit was in the same proportion.      [adapting M R James’s translation]

Significantly, the setting for this image is precisely that offered by Papias, namely the thousand year earthly reign of Christ. Is this work drawing directly on Papias’s writings, or on a more widespread Christian tradition? If it is using Papias directly, one speculation comes naturally to mind. Although this is unprovable, might other portions of the Apocalypse of Paul be quoting other lost works of Papias, especially his famous five books?

In any case, the Apocalypse of Paul was a hugely popular work in medieval Europe, bringing these ideas to a widespread audience. Originally written in Greek, we have translations in Coptic, Syriac, Irish, and other languages, and many Latin versions exist. (See J. K. Elliott, The Apocryphal New Testament, 616-644). 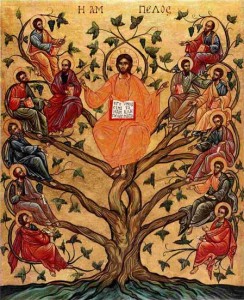 We also find a strange text that presently survives only in Coptic, and bizarrely titled An Encomium On Saint John The Baptist By Saint John Chrysostom. Jesus leads the apostles on a tour of the Third Heaven in which John now resides, leading Thomas to ask about the trees and their fruits. Jesus responds, “I will hide nothing from you about the things concerning which ye have questioned Me. As regardeth the vine, concerning the fruit of which ye have asked, there are ten thousand bunches of grapes upon it, and each bunch will produce six metrites [of wine]. As regardeth  the palm-trees in Paradise, each cluster yieldeth ten thousand dates, and each cluster is as long as a man is high. So likewise is it in the matter of the fig-trees; each shoot produceth ten thousand figs, and if three men were to partake of one fig each of them would be satisfied. On each ear of the wheat which is in Paradise there are ten thousand grains, and each grain produceth six measures of flour.” Note that here again, the words are placed in Jesus’s own mouth.

Among other references, we turn to the medieval text called The Vision of Enoch the Just, or Armenian Enoch. This is apparently a translation of a Greek text from the seventh and eighth centuries which uses prophecy as a vehicle for describing current politics, in this case the wars of Byzantine and Islamic rulers. It is in other words much later than the other texts I am describing, and has no obvious connections with the vast Enoch literature. Describing the future golden age though, “Enoch” prophesies that “One grain of corn shall give one hundred ears of corn and one branch of the wine one thousand bunches of grapes.” This is speculative, but perhaps this Vision was in fact using some ancient Jewish Enoch literature as a framework for its later political account. If so, that would be another example of the older Jewish (and Enochian) roots of the motif I am looking at here.

The “ten thousandfold” image, in short, offers a fascinating example of how ideas and sayings developed and circulated in the early church.

What we have here is an image that originated in the Jewish world of Enoch, but developed in more florid form (fruit ten-thousandfold) in the apocalyptic world of messianic expectation during the late first/early second centuries. This was after all the period between the two great Jewish revolts. It is an open question whether the explicitly Jewish version in 2 Baruch is earlier than the saying quoted by Papias, or whether the one influenced the other.

As so often, the story reminds us of the very thin boundaries that still separated Christians from their Jewish background, even after the Fall of Jerusalem. It also demonstrates the powerful hold that ideas originating in Enoch had on the early church. Without the Old Testament Pseudepigrapha, it is very difficult to make sense of early Christianity.

The “ten thousandfold” motif is also suggestive for the making of gospel narrative. Originally, the image circulated free of any association with Jesus. For Papias, though, not only has it become firmly identified as a Jesus saying in the oral tradition, but it has already been fitted into a narrative dialogue with Judas. Lest we think that Papias was credulous about such things (as Eusebius certainly thought), Irenaeus has no difficulty accepting that context.

Of course, the thousandfold image was not recorded in any of the gospels, but it did not vanish entirely. Through its preservation in 2 Baruch, and even more in the Apocalypse of Paul, it remained in wide circulation through the Middle Ages and beyond.

I have just outlined the story here, but it would be intriguing to follow that motif through later eras, and especially through Islamic writings.