THE SECRET RESURRECTION OF SALVATOR ROSA

I think I’ve discovered a long-lost secret society that transmitted its religious message through coded paintings. No, I have not lost my mind, nor have I changed my last name to Brown.

The main problem in studying the history of secret societies and underground ideas is that they are all so, well, secret. On the positive side, for some writers, the absence of solid evidence means that you can speculate widely and, often, irresponsibly, wandering into bizarre conspiracy theories. Sober academic historians obviously don’t want to follow them into those regions. Yet at the same time, they know that secret societies and conspiratorial movements certainly have existed, and some have played a critical part in many different settings. Witness the history of freemasonry, and look at Christian heresies through the Middle Ages. Look especially at a clandestine religious movement like the Family of Love in the Early Modern period, the subject of a quite definitive scholarly book by Alastair Hamilton. In highly repressive eras, people need to resort to all sorts of subterfuges to share and communicate their ideas – to codes, subterfuges, and using symbolic messages that will only be understood by initiates.

Imagine, for instance, that you lived in papal Rome at the height of the Inquisition, in the mid-seventeenth century. Suppose you had real doubts about the Catholic orthodoxy that was presented to you so absolutely, and even about the broader message of Christianity. You have read widely in the Classics, and have come to admire the pagan philosophers much more than the saints and apostles. You dabble in ancient philosophies, but above all you are a skeptic, a rationalist or deist, perhaps even an atheist. You think the supernatural is a massive ruse by which the wealthy keep the poor in subjection. You have some friends with whom you share these ideas very discreetly, knowing that exposure could cost your life and destroy your family. Even so, as a propertied person, you have a little protection, and you can indulge your ideas in the privacy of your home. You can even patronize daring artists who will produce pictures to satisfy your interests, images that look harmless enough, but whose seditious real message will be recognized only by your closest friends.

That brings me to the work of Salvator Rosa (1615-73), who led an amazing and eventful life. He may have joined a patriotic revolution in Naples in 1647, he may have enlisted with a band of mountain brigands. As the phrase goes, he was the sort of man who could start a fight in an empty room. 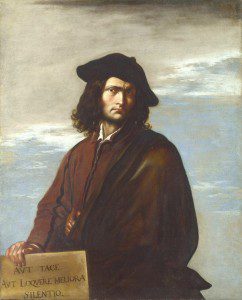 His paintings reveal a still underrated genius who in so much foreshadows the great paintings of the Romantic era 150 years after his time. Looking at his studies of witches and demons, you often have to double check to see that you have not mistakenly got hold of some of Goya’s work from the early nineteenth century. 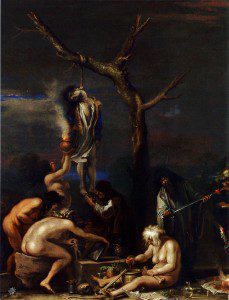 His choice of topics was bizarre. In some cases, he was the only person in the history of Western art to select a particular theme from the rich corpus of Greek mythology.

And then there is his Resurrection scene, from 1662. 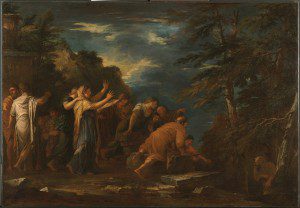 It looks familiar enough in many ways, with the disciples greeting the man emerging from the tomb, and especially the fervent women rejoicing. (See it in more detail here). Except it is very much not what we think. The man returning from the dead is not Christ but Pythagoras, the genius and reputed miracle-worker who lived in the sixth century BC.

Remembered today as a philosopher and mathematician, Pythagoras was a mystic who believed in immortality and the reincarnation of the soul. He mocked the official religious teachings of his day, and one story recounts that he visited the underworld during his lifetime. He spent a year in seclusion in a cave, where he saw the shades of Homer and Hesiod being tortured eternally for the gross lies they had told about the gods and the afterlife. Here is the original Classical source from which one version of the story is taken:

Pythagoras, on coming to Italy, made a subterranean dwelling and enjoined on his mother to mark and record all that passed, and at what hour, and to send her notes down to him until he should ascend. She did so. Pythagoras some time afterwards came up withered and looking like a skeleton, then went into the assembly and declared he had been down to Hades, and even read out his experiences to them. They were so affected that they wept and wailed and looked upon him as divine, going so far as to send their wives to him in hopes that they would learn some of his doctrines; and so they were called Pythagorean women.  (Diogenes Laertius, Lives of Eminent Philosophers VIII.41)

Rosa then is depicting the return of a skeptic from the land of the dead, one who has proved that everything mainstream believers think about the afterlife is false. There is a striking contrast between the expressions of the believers, fervent, pious and gullible, and the cynical expression of the philosopher himself. 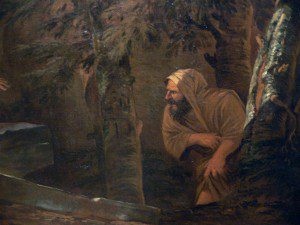 What I am saying here is of course my own interpretation, but one could draw a deeply anti-Christian message from this work. You could read it as showing a bogus resurrection, designed to appeal to credulous disciples. Rosa incidentally changed the original story to give more prominence to women disciples, presumably to make the Christian parallel more explicit.

I think this painting is an anti-Christian tract, a bitter parody, and from the heart of papal Rome. We should understand it as a very early artifact of the Radical Enlightenment, perhaps even a manifesto of that movement.

It wasn’t the only subject he was treating at this time. His other work seems to show Christ and the miraculous catch of fish. 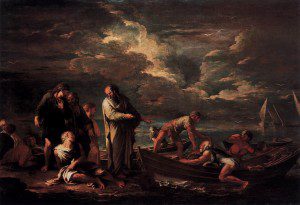 But, no, it didn’t. The title is instead “Pythagoras and the Fishermen.” (There’s a large-scale image of the painting here). The story tells how Pythagoras met some fishermen, and told them that he could give them the exact number of fish in their catch. When he gave the right number, he insisted that they release the fish as they were fellow beings, who might contain the transmigrated souls that had once been in humans. Again, the informed observer draws parallels between Christ and Pythagoras, and might even ask seditious questions about whether the gospel writers themselves had drawn on this pagan story.

Rosa himself tells us something about the composition of these two paintings, which was apparently suggested by the famous Queen Christina of Sweden. 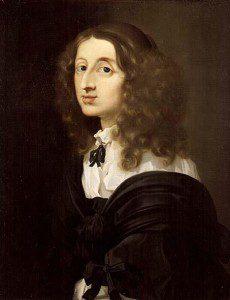 Christina abdicated her throne in Protestant Sweden, and in 1654 traveled to Rome where she declared herself a Catholic. She was a mystic, deeply interested in alchemy and science, who read Lucretius’s daring work on materialism and atomism, and also dabbled in Pythagorean thought. (I am using Helen Langdon’s article “The Representation of Philosophers in the Art of Salvator Rosa”). Like Rosa, Christina was also deeply involved with the Roman literary academies.

Rosa reported that he had

finished the two subjects I was working on, the subjects of which are entirely novel, never touched on before. I have painted on one canvas […] Pythagoras by the seashore surrounded by his sect, paying some fishermen for the net which they are pulling in, so as to set the fish free again, a theme taken from one of the essays of Plutarch. The other is when the same man, after spending a year living underground, at the end of it emerged, awaited by his sect, men and women alike, and said he had come from the Underworld and had seen there the soul of Homer and Hesiod and other deceptive rubbish of those simple minded times (altre coglionarie appettatorie di quei tempi cosi dolcissimi di sale).

Another translation might be “ridiculous antics of those nonsensical times.”

Would I be going too far in suggesting that the final contemptuous phrase refers not to the ideas of sixth century BC Greece, but Catholic Rome c.1660?

This ruse, the claiming of divinity by a trick, was often mentioned by libertin [skeptical] philosophers, and religion as imposture or deceit is a traditional topos in libertin writing. It recurs obsessively in the writings of Gabriel Naudé, who had been Christina’s librarian in 1650-1651. … Rosa may first have known the story through Paganino Gaudenzio, who in his Della Peregrinazione Filosofica of 1643 had recounted Ermippo’s telling of Pythagoras’ stay in an underground grotto. … Probably around 1659 the anonymous tract Theophrastus Redivivus was published, which similarly attacks the deceits of religion, whilst defending absolutism as the only way in which the wise man could live according to nature. The author, who recounts the Pythagoras’ story at length, sees its implications, and the way in which the idea of a feigned resurrection had implications for the resurrection of Christ. He concludes his narration with a passage debunking the very concept of resurrection, and adds this comment: “Thus it is clear that all legislators and princes are cheats and dissimulators, religion is nothing other than a way of dominating a credulous people.”

[Just a quibble here, I think the author is actually misdating the Theophrastus Redivivus, which has a complicated publication history, but that’s not relevant to the basic point].

I repeat, expressing those very bold ideas publicly could lead to torture and death. We should be amazed that a painting like Rosa’s “Pythagoras Emerging from the Underworld” survives.

Apart from suggesting the limits of even the harshest censorship in suppressing ideas, the story also indicates the very deep roots of the skepticism and unbelief that we often think of as a product of the Enlightenment. The fundamental critique of Christian doctrine is much earlier, and much more consistent, than we often allow.

NOTE ON SOURCES: My main source on Rosa and his world is Helen Langdon, Salvator Rosa (Paul Holberton Publishing, 2010). This grew out of the spectacular exhibit of Rosa’s work at the Kimbell Art Gallery in Fort Worth back in 2010-11. The exhibit had the great title “Bandits, Wilderness and Magic.”

September 30, 2013 The Promise of America's Religious Colleges
Recent Comments
8 Comments | Leave a Comment
"Thank you for the insights. As you pointed out, technology has been a two edged ..."
the old scribe Is Religion Naturally Averse to Technology?
"I suppose the question is whether or not the Holy Spirit could use technology to ..."
Nimblewill Is Religion Naturally Averse to Technology?
"What a great post, Allie! Insightful and eloquent."
Ansley Every Day People in Every Day ..."
"Impressive article. Provides the necessary perspective for entering into an informed discussion about the science/religion ..."
the old scribe Science, Religion, and Nineteenth Century Protestantism
Browse Our Archives
Related posts from Anxious Bench