In October, 1555, the regime of Mary Tudor burned two former English bishops for their stubborn Protestant convictions. As they went to the flames, one of the martyrs, Hugh Latimer, addressed his comrade, Nicholas Ridley, in stirring terms that have inspired successive Protestant generations. He urged him, “Be of good cheer, master Ridley, and play the man; we shall this day light such a candle in England, as I hope, by God’s grace, shall never be put out.”

The words are celebrated, their source less so. As virtually nobody remembers today, Latimer was quoting the Biblical text which in the King James version would become “I shall light a candle of understanding in thine heart, which shall not be put out, till the things be performed which thou shalt begin to write.” That is 2 Esdras/Fourth Ezra, 14.25, a book that is no longer included in Protestant Bibles. The disappearance of that text offers a surprising commentary on changing concepts of the Biblical canon. 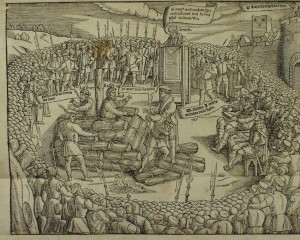 (Throughout this post, I am using the chapter by Bruce M. Metzger in James M. Charlesworth, ed., Old Testament Pseudepigrapha, vol. I, 517-559).

In modern Protestant Bibles, Ezra is the main character of an important but short book, describing the restoration of Jerusalem after the Babylonian exile. Traditional Jewish Bibles merged Ezra with Nehemiah to become a single canonical book. But that coverage gives a very poor idea of Ezra’s astonishing importance in Jewish and Christian history. Like Enoch, he was above all credited with numerous writings that have survived in multiple languages – Apocalypses, Visions, Questions.

So critically important did he become in these works that Ezra was portrayed as an apocalyptic or even messianic figure. In a mysterious passage, the Qur’an denounces Jews for proclaiming Ezra (Uzair) the Son of God, just as Christians exalt Jesus (9.30). Historians debate whether this might refer to some actual fringe Jewish sect, or if it is just a rhetorical slur on Judaism in general.

One of these alternative texts was especially important for Christians. I have already described the different attitudes among Christians worldwide to the Old Testament. Protestants follow Jews in accepting as canonical only those books with clear Hebrew origins. Virtually all other churches, including Catholics and Orthodox, follow the Septuagint translation, which also includes several additional books known as the Deuterocanon. Over and above that, though, we also find a couple of other books that fit neither in the First Canon nor the Second, and one of these is 2 Esdras/Fourth Ezra. (By the way, the exact numbering of the various books of Ezra/Esdras is ferociously complex).

2 Esdras (let me use the shorter title) is a work of 16 chapters, in which chapters 3-14 represent a series of visions, the “Ezra Apocalypse.” The work was probably written around the year 100, close to the composition of the Biblical Book of Revelation. It was likely written in Palestine and possibly in Hebrew. (I have not read this new book yet, but Brill is advertising a forthcoming collection of essays edited by Matthias Henze and Gabriele Boccaccini, Fourth Ezra and Second Baruch: Reconstruction after the Fall, with an impressive table of contents).

At an early stage, 2 Esdras was adopted by Christians. Copies survive in multiple languages  – Latin, Syriac, Arabic, Armenian and Ethiopian. Ambrose in particular was an “ardent admirer” of the book, citing it clearly as inspired scripture, while Jerome was dubious. Through the time of the Reformation and the Council of Trent, 2 Esdras was included in most Bibles. “All through the Middle Ages, it maintained an intermediate position between canonical and merely human compositions, and even after the Council of Trent  … was placed in the appendix to the official edition of the Vulgate.” It still holds fully canonical status in the ancient church of Ethiopia. 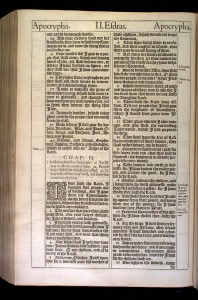 2 Esdras exercised a wide appeal. The older Catholic Encyclopedia makes the striking statement that the book “may be said to have framed the popular belief of the Middle Ages concerning the Last Things.” As Metzger points out, Columbus even used a passage from the book (6.42) to support his geographical views, and to convince the Spanish monarchs to sponsor his voyage.

Parts of the book influenced the liturgy, including the Roman Missal. One of the book’s greatest legacies survives in a Catholic context, where the traditional response to death involved the liturgical phrase “Eternal rest grant unto them, O Lord, and let perpetual light shine upon them.” This is adapted from 2 Esdras, 2:34–35.

From the sixteenth century, 2 Esdras was generally demoted to apocryphal status, but that did not mean that it disappeared from Christian usage, or from Bibles. It was for instance included in the Zurich Bible of 1529. In Protestant England, although it was printed in the section clearly labeled as “Apocrypha,” it was still clearly read as a Biblical text, with the same font, the same format of chapter and verse style. That was true both of the Geneva Bible and the later King James. Placing this section between Old and New Testament had the unforeseen consequence of suggesting that they represented a bridge between the two portions of the Bible.

John Milton, that great Puritan, certainly read 2 Esdras. He records that “It chanced this morning, as I sat down to finish my Preface that I had, for my introductory reading, the fifth chapter of the second book of Esdras.” He may well have used the same source for the name of the Archangel Uriel, who appears in Paradise Lost. 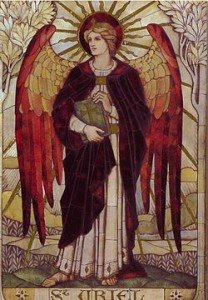 Like other apocryphal books, 2 Esdras continued to appear in English Protestant Bibles into the nineteenth century. At that point though, publishers began excluding the apocrypha. The key date was 1826, when the British and Foreign Bible Society declared that it would not fund future printings of the Bible that included the Apocrypha. Subsequently, these books largely dropped out of the Protestant consciousness. Modern Protestant Bibles make not the slightest nod to the apocrypha that would have been so familiar to (say) Shakespeare and Milton.

As with the Deuterocanonical books, the story of 2 Esdras illustrates how concepts of the scope and canon of the Bible have changed over the centuries, and in remarkably recent times.