THE CAVE OF TREASURES

Throughout history, both Jews and Christians have been extraordinarily prolific in producing alternative scriptures, which we conventionally divide into Old and New Testament apocrypha (or pseudepigrapha). Some texts, though resist such neat divisions. While apparently expanding on Old Testament events and personalities, they actually present Christian doctrines so strongly that they certainly belong alongside New Testament texts, and some can be considered alternative gospels.

One of the most impressive such works is the so called Book of the Cave of Treasures, an incredibly ambitious work that frames the Christian story in a cosmic context, depicting the life and death of Jesus as the summary and essence of meaning of all that has gone before, all human history. Although the work is credited to a fourth century Church Father, it was probably written somewhat later, in Syriac, and was widely translated. It remained popular through the Eastern Christian worlds at least into the thirteenth century. (And yes, I know the title makes it sound like something out of Harry Potter).

Unknown to non-specialists, it is easily accessible through an online translation, which reproduces the work of the prolific E. A. Wallis Budge. It amply repays reading to understand how early and medieval Christian framed their faith. 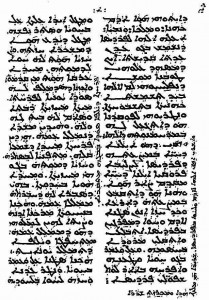 Briefly, the Cave supplies a narrative of human history from the Creation through the time of the apostles, and the Day of Pentecost. The author believes this history covers a time span of 5,500 years, and the narrative is divided into five millennia, with Christ’s life fitting into the final half-millennium. The author frames Christ’s redemptive sacrifice Christ’s sacrifice very literally through the story of Adam, the epitome of the whole human race.

In his life, Adam was “the prototype of Christ in every respect,” at once priest, prophet and king:

Now Eden is the Holy Church, and the Church is the compassion of God, which He was about to extend to the children of men. For God, according to His foreknowledge, knew what Satan had devised against Adam, and therefore He set Adam beforehand in the bosom of His compassion…. Eden is the Holy Church, and the Paradise that was in it is the land of rest, and the inheritance of life, which God hath prepared for all the holy children of men. And because Adam was priest, and king, and prophet, God brought him into Paradise that he might minister in Eden, the Holy Church….  That Tree of Life that was in the midst of Paradise prefigured the Redeeming Cross, which is the veritable Tree of Life, and this it was that was fixed in the middle of the earth.

But Adam’s role is no less significant after death. The work describes Adam’s burial in the Cave of Treasures on the holy mountain, into which he is followed by his descendants, Seth, Enosh, Jared, Methuselah, and the rest. Finally, though, Noah exhumes the bodies, and his son Shem relocates them where Adam had specified, at the world’s center. This center is Golgotha, the place of the crucifixion, where a cross-shaped grave awaits them:

And when they arrived at Gâghûltâ [Golgotha], which is the centre of the earth, the Angel of the Lord showed Shem the place [for the body of Adam]. And when Shem had deposited the body of our father Adam upon that place, the four quarters [of the earth] separated themselves from each other, and the earth opened itself in the form of a cross, and Shem and Melchizedek deposited the body of Adam there. And as soon as they had laid it therein, the four quarters [of the earth] drew quickly together, and enclosed the body of our father Adam, and the door of the created world was shut fast. And that place was called Karkaphtâ [“Skull”], because the head of all the children of men was deposited there.

Shem further appoints his colleague Melchizedek as priest to minister at the place. 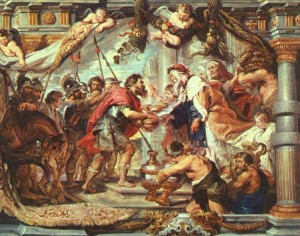 In the canonical Bible, Melchizedek appears briefly as a king and priest who meets Abraham, and blesses him with bread and wine (Gen 14). Throughout Christian history, Melchizedek has fascinated readers as a forerunner of Christ, and of the priesthood. 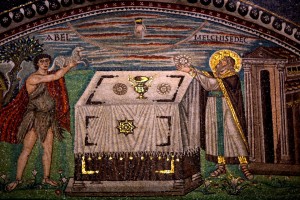 The universe was thus preparing for the day of crucifixion, when human history would come full circle.

Know also that Christ was like unto Adam in everything, even as it is written. In that very place where Melchizedek ministered as a priest, and where Abraham offered up his son Isaac as an offering, the wood of the Cross was set up, and that self-same place is the center of the earth, and there the Four Quarters of the earth meet each other. For when God made the earth His mighty power was running before it, and the earth was running after it, and the power of God stood still and became motionless in Golgotha; and that same place formeth the boundary of the earth. When Shem took up the body of Adam, that same place, which is the door of the earth, opened itself. And when Shem and Melchizedek had deposited the body of Adam in the center of the earth the Four Quarters of the earth closed in about it, and embraced Adam, and straightway that opening was closed firmly, and all the children of Adam were not able to open it. And when the Cross of Christ, the Redeemer of Adam and his sons, was set up upon it, the door of that place was opened in the face of Adam. And when the Wood [the Cross] was fixed upon it, and Christ was smitten with the spear, and blood and water flowed down from His side, they ran down into the mouth of Adam, and they became a baptism to him, and he was baptized. 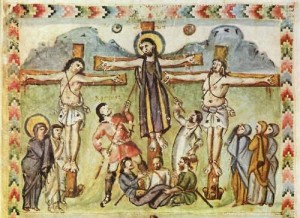 The Cave goes to extraordinary lengths to draw parallels between the crucifixion and the Biblical narrative that has preceded it, back to the Creation, and indeed especially to that event. I offer a small sample here:

On Friday Adam and Eve sinned, and on Friday their sin was remitted.

On Friday Adam and Eve died, and on Friday they came alive.

On Friday Death reigned over them, and on Friday they were freed from his dominion.

On Friday Adam and Eve went forth from Paradise, and on Friday our Lord went into the grave.

On Friday Adam and Eve became naked, and on Friday Christ stripped Himself naked and clothed them.

On Friday Satan stripped Adam and Eve naked, and on Friday Christ stripped naked Satan and all his hosts, and put them to shame openly.

On Friday the door of Paradise was shut and Adam went forth, and on Friday it was opened and a robber went in.

I note in passing that this section of parallels cries out to be set to musical form, either a hymn or a responsorial chant. The Syriac church was famous for its hymns.

The whole book is intoxicating in its weirdness, and its daring willingness to maraud through scripture.

October 7, 2013 THE GREEN MAN AND THE KING OF SALEM
Recent Comments
0 | Leave a Comment
"Although (obviously!) not part of Christianity, I think the whole M*slim thing about images of ..."
Mo Fin Iconoclasts I Have Known, and Even ..."
"You come up with the most fascinating research projects and you always deal with them ..."
GEVeith Iconoclasts I Have Known, and Even ..."
"I think the ESV originated as a conservative alternative to the NRSV, but eventually marketing ..."
NorrinRadd The Gender Inclusive Bible Debate (Medieval ..."
"Why do we want texts of "beauty and transcendence"? Koine Greek was the *common* tongue. ..."
NorrinRadd The Gender Inclusive Bible Debate (Medieval ..."
Browse Our Archives
Related posts from Anxious Bench