The Puritans as Masters of Reform

My history graduate students and I recently read David Hall’s A Reforming People: Puritanism and the Transformation of Public Life in New England (2011), a remarkably admiring portrait of early New England Puritans and their participatory society. While progressive critics, following Nathaniel Hawthorne, have often caricatured the theocratic rule of the Puritan fathers, Harvard’s Hall – one of the finest historians of the Puritans of recent decades – argues that the Puritans were actually masters of equitable reform and responsive politics. Not quite ‘democrats’ (they still respected the role of godly rulers and pastors), the New England settlers nevertheless were able to address pressing local problems, including everything from alleviating the plight of the poor to fencing in rampaging pigs.

The great historian of Puritanism Perry Miller rescued the Puritans from the intellectual scorn of progressives six decades ago; here Professor Hall reintroduces the Puritans to our American society, which is gasping for efficacy in social reform. Were it not for Hall’s earlier, more religiously-focused works (most notably his brilliant Worlds of Wonder, Days of Judgment), I might wonder if he understands how theological and ecclesiastical reform (in the “Reformation” sense) primarily inspired the Puritans. But following on earlier studies more concerned with Puritan religion, here he focuses on the Puritans’ social and political vision, rooted in their practical Christian ethics. Exceptionally concerned with protecting their fundamental liberties (a point I made earlier with reference to the work of historian Michael Winship), the Puritans erected a polity in which officials were held closely accountable, many men (and unofficially, women) participated in church and local government, and church and civil courts sought equitable treatment for rich and poor.

It must be noted, and Hall does note it, that this equity usually did not extend to Native Americans, slaves, and those deemed heretical. Still, Hall does not hesitate to affirm that he finds “the New Testament ethics embraced by the colonists and their heartfelt craving for peace and mutuality appealing, perhaps enchanting.” In the book’s final pages, he contrasts the Puritans’ practical ethics with our seemingly broken civil society, “when every attempt at salutary reform is being thwarted by self-interest of the most egregious kind, and when any appeal to “compassion” is deflected in order to protect a corrupt status quo.” I agree wholeheartedly with Hall’s sentiment and frustration: while politicians squabble and grandstand (not least in our current “shutdown” farce), there seems no will to grapple with the most obvious problems of poverty, education, immigration, incarceration, the breakdown of the family, and a host of other issues.

Seventeenth-century New England was successful at reform, however, precisely because it was driven not by a mammoth national government, but by nimble local governments, and especially by the vital mediating institutions of churches and families. Cambridge church records reflect the quiet acts of charity by church members for “the pore brethren.” One man gave a cow to bolster the church’s benevolence fund. The congregation repeatedly helped those suffering tragedy, sickness, and poverty.

Meanwhile, entrenched aristocratic interests and rigid national authority prevented substantial political and legal reforms in England during the same period, in spite of the instability caused by the English Civil War. How much more formidable, Hall might ask, are the entrenched interests of today?

Where then is our hope of equity, justice, and reform? It surely doesn’t lie in the election of this or that national candidate or political party. Whether local governance and mediating institutions anything like those of seventeenth-century New England can or will flourish in modern America is an increasingly important question.

October 7, 2013
THE GREEN MAN AND THE KING OF SALEM
Next Post

October 9, 2013 The Meaning of Baptism in the Early Church
Recent Comments
5 Comments | Leave a Comment
Browse Our Archives
Follow Us! 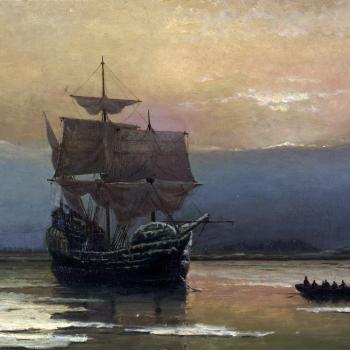