For many Christians, Biblical literalism is a fraught subject. My own theory is that one can be conservative to different degrees about such matters, but absolute 100% literalism is impossible, because there are at least a few Biblical verses that nobody can accept in pure literal form. The obvious example is Joshua 10.12-13, which assumes that the Sun rotates around the earth. “The sun stopped in the middle of the sky and delayed going down about a full day.” 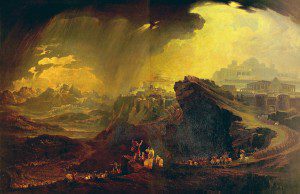 As a basis for discussion, though, I offer one example that I have often used in classes. In my opinion, it is a clear example of how a Biblical author used and adapted original materials. I’d like to know what other readers think.

I have written about reading documents historically, in order to find which of multiple versions might be the earlier or more authentic. Whenever I’m teaching about Christian origins or the early Church, I inevitably get into matters of scriptural authority, which is deeply sensitive for many students. There’s one passage in particular – or rather, one pair of texts – that I find very useful for illustrating critical approaches to the New Testament in a way that gets students’ attention.

This is the Sign of Jonah, which features in passages in Mark (12: 39-42) and Luke (11. 29-32). The two texts have such close verbal resemblances that they must have a common origin. Because they are in Matthew and Luke but not Mark, most (but not all) scholars would attribute them to the lost gospel source Q.

Jesus is talking about prophetic signs. He refers to the Queen of the South, who traveled to see Solomon, and also the sign of the prophet Jonah. According to Luke

For as Jonas was a sign unto the Ninevites, so shall also the Son of man be to this generation. … The men of Nineveh shall rise up in the judgment with this generation, and shall condemn it: for they repented at the preaching of Jonas; and, behold, a greater than Jonas is here (KJV)

Matthew’s reading is similar, but with a critical difference:

In Luke, Jonah is a prophet who calls to repentance. In Matthew, he is relevant because of the direct parallels between his experience and Jesus’s approaching burial and Resurrection. Matthew’s version offers an explicit prophecy of the Resurrection. 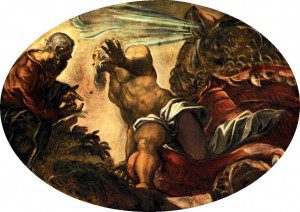 Let us assume that these texts come from a common original. I then ask my students which of the two is likely to reflect the original more closely. We really have two options to consider:

A. Luke’s reading is earlier and closer to Q. In that case, Matthew has subsequently expanded or adapted the original in accordance with doctrines of the emerging Church, and its efforts to find prophetic foretastes of the Christian story.

B. Matthew’s reading is earlier and closer to Q. The original text included a prophecy of the Resurrection, which Luke has omitted.

Of the two, it is very difficult to argue against option A, if only because it is so wildly improbable that an author like Luke would have edited out a prophecy – in Jesus’s own words! – that would so precisely have served the evangelist’s purposes. On the other hand, it is easy to imagine an author placing such prophecies retroactively into a narrative, as Matthew seems to have done.

Perhaps the Resurrection element in Matthew’s discourse originated as a midrashic comment or an editorial explanation by the author, which subsequent rewritings transformed into part of a quotation attributed to Jesus. Ancient Greek scribes knew nothing of quotation marks.

I honestly don’t see any alternative to seeing in these passages an editorial reworking of an earlier source to bring it into accord with the church’s post-Resurrection teaching.

I suppose a skeptical academic could draw wild and wonderful conclusions from that point: “Look! The gospels attribute to Jesus something he didn’t say! The whole New Testament is bogus!” Obviously, there’s no need to resort to such inverted fundamentalism. What the Jonah story shows, convincingly, is that the Gospels, like the rest of the New Testament, were written by people who had come to faith, and that faith informed their work. Nothing surprising there. Moreover, standard methods of historical criticism can help us determine just how the authors have interpreted their sources. 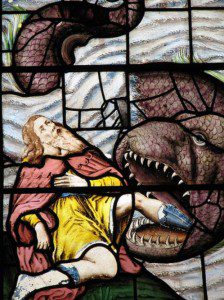 November 25, 2013 Clergy Housing Allowances Ruled Unconstitutional
Recent Comments
22 Comments | Leave a Comment
Browse Our Archives
get the latest from
Anxious Bench
Sign up for our newsletter
POPULAR AT PATHEOS Evangelical
1