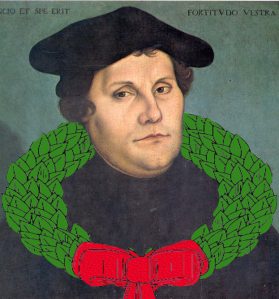 On the afternoon of December 25, 1530, Martin Luther preached a Christmas sermon. In the context of a still-chaotic Reformation, a combative Martin Luther railed against “papists,” “Junkers,” and “Turks” as he proclaimed the “joyful news” that the Christ child was the Lord and Savior. Luther was clearly embattled. In the wake of the 1529 Marburg Coloquy (at which Luther stood firmly against Ulrich Zwingli’s memorialist view of the Eucharist) and the 1529 Siege of Vienna by the Ottomans (at which Luther issued On War Against the Turk), Luther seems more preoccupied by internal and external threats than by proclaiming the Christmas story.

It’s a fascinating document, one that displays vituperation and joy, self-interest and self-sacrifice, conflict and peace. On a sacred holiday that honors the incarnation of the sinless God-man, it’s also a reminder that humans are historically bound, imperfect vessels of the Gospel (an appropriate reminder as you hang out with your crazy in-laws today).

Here are some representative sections:

You have heard today the story from the Gospel of St. Luke of how it came to pass that our Lord Christ was born and then also the message of the angel, who announced who the boy was who was born.  Now we shall go on and take up the message of the angel.  So for today you have heard only that the child was born and that he is the Lord and Savior.  Thus we spoke of the story, how it unfolded, and who the persons in it were.  This article is so high that even today it is believed by only a few.  Nevertheless, God has preserved it even through those who have not believed it.  For at all times in the monasteries and universities there have been disputations and lectures which dealt with the fact that Christ the Lord, born of Mary, is true man and God.  But it went no further than saying and hearing it.  But this belief is held by the devil too and the Turks and all the godless among Christians, and is the kind of belief which everybody believes that it is true but would not die for it, as Eck and many others show today.  If they had as much from Christ and the teaching of the gospel as from the devil, they would also think as much of Christ. The Turk too admits that Christ was born of the Virgin Mary, that Mary was an immaculate virgin, and that Christ was more than a man; but the Word of God, as it is given in the gospel, he denies, and yet I fear that the Turk believes more of this article than does the pope.  Therefore it is a high article to believe that this infant, born of Mary, is true God; for nobody’s reason can ever accept the fact that he who created heaven and earth and is adored by angels was born of a virgin.  That is the article.  Nobody believes it except he who also knows this faith, namely, that this child is the Lord and Savior. . . .

Who, then, are those to whom this joyful news is to be proclaimed?  Those who are faint-hearted and feel the burden of their sins, like the shepherds, to whom the angels proclaim the message, letting the great lords in Jerusalem, who do not accept it, go on sleeping.  Beyond the first faith there must be the second faith, that Christ is not only the virgin’s Son, but also the Lord of angels and the Savior of men.  The words anyone can understand, antisacramentarians, fanatics, sectarians, and Turks; but they do not proceed from the heart they come only from hearing and go no farther than hearing.  This is not faith, however, but only a memory of what has been heard, that one knows that he has heard it.  Nobody ventures upon it, so as to stake goods, life, and honor upon it.  And yet we must preach it for the sake of those who are in the multitude to whom the angel preached. . . .

You can see what our papists and Junkers, who have chosen innumerable saviors, have felt about this faith.  Indeed, the papists still want to retain the mass, the invocation of saints, and their invented works by which we are to be saved.  This is as much as to say, I do not believe in the Savior and Lord whom Mary bore; and yet they sing the words of the angel, hold their triple masses [at Christmas] and play their organs.  They speak the words with their tongues but their heart has another savior.  And the same is true in the monasteries:  if you want to be saved, remember to keep the rule and regulations of Francis and you will have a gracious God!  And at the Diet of Augsburg they decided to stick to this.  In the name of all of the devils, let them stick there!  It has been said sufficiently that this Savior lies in the manger.  But if there is any other thing that saves me, then I rightly call it my savior.  If the sun, moon, and stars save, I can call them saviors.  If St. Bartholomew or St Anthony or a pilgrimage to St. James or good works save, then they surely are my savior.  If St. Francis, then he is my savior.  But then what is left of the honor of the child who was born this day, whom the angel calls Lord and Savior, and who wants to keep his name, which is Savior and Christ the Lord.  If I set up any savior except this child, no matter who or what it is or is called, then he is not the Savior.  But the text says that he is the Savior.  And if this is true—and it is the truth—then let everything else go. . . .

One who hears the message of the angel and believes it will be filled with fear, like the shepherds.  True, it is too high for me to believe that I should come into this treasure without any merit on my part.  And yet, so it must be.  In the papacy this message was not preached in the pulpit, and I am afraid that it will disappear again.  It was the other message that the devil initiated and has allowed to remain in the papacy.  All their hymns are to this effect.  Among the Turks the devil has completely wiped it out.  Therefore, remember it, sing it, and learn it, while there is still time!  I fear that the time will come when we shall not be allowed to hear, believe, and sing this message in public, and the time has already come when it is no longer understood; though Satan does not allow it to be spoken with the mouth, as the papists do.  But when it comes to declaring that he is born for you and to singing:

In dulci jubilo
Now sing with hearts aglow!
Our delight and pleasure
Lies in praesepio
Like sunshine is our treasure
Matris in gremio
Alpha est et O!

—this he is unwilling to allow.

What we have said, then, has been about that second faith, which is not only to believe in Mary’s Son, but rather that he who lies in the virgin’s lap is our Savior, that you accept this and give thanks to God, who so loved you that he gave you a Savior who is yours.  And for a sign he sent the angel from heaven to proclaim him, in order that nothing else should be preached except that this child is the Savior and far better than heaven and earth.  Him, therefore, we should acknowledge and accept; confess him as our Savior in every need, call upon him, and never doubt that he will save us from all misfortune.  Amen.

December 24, 2013
Was Christmas in Revolutionary America a Drunken Bash?
Next Post

December 26, 2013 Reforming Hollywood
Recent Comments
0 | Leave a Comment
Browse Our Archives
get the latest from
Anxious Bench
Sign up for our newsletter
POPULAR AT PATHEOS Evangelical
1