I have posted several times on religious images in art and what they can tell us about ideas and debates in earlier eras. I think scholars often pay insufficient attention to the incredible resources that lie in such visual imagery – we can be a very text-bound lot.

As an example, I offer William Hogarth’s astonishing picture of religious fanaticism in eighteenth century England, his 1761 response to the Methodist Revival – and every point applies to the critics of America’s contemporary Great Awakening. The picture is entitled “Credulity, Superstition and Fanaticism.” 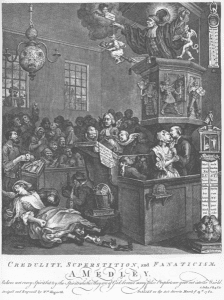 You can see a much more detailed image here, and it really does repay careful analysis. Click on that image to expand it even further.

Every square inch of the picture demands examination – take your time!

The number of points made about religious extremism, or what we might call “cultish” fanaticism, is enormous. This one picture supplies evidence that we would otherwise need to draw on literally hundreds of contemporary tracts and pamphlets to supply. Note especially the strong sexual currents in the critique of extremist religion.

By the way, I have recently been posting on war’s impact on religious attitudes, and especially on apocalyptic expectations. This is a wartime picture, from the time of the Seven Years War (1756-63), a sprawling global conflict between England and France.