Molly Worthen’s Apostles of Reason: The Crisis of Authority in American Evangelicalism is a sobering encounter with an old friend. At first glance, one’s friend seems to have left some of his old ways behind. He’s more sophisticated, and more well-heeled than in his younger years. He thinks he’s changed a great deal. But when one sits down and chats for an hour, it becomes apparent that one’s friend has the same old problems.

“Scratch a neo-evangelical,” Worthen diagnoses this situation, “and underneath you would likely find a fundamentalist who still preferred the comforts of purity to the risks of a free inquiry.” Scratch a tattooed  and spectacled Emergent speaker talking about carbon offsets, she might have said toward the end of her story, and you’ll find another Protestant hyper-individualist. In a nutshell, Worthen writes about a religious movement “that extols individualism but ensnares every individual in a web of clashing authorities.” 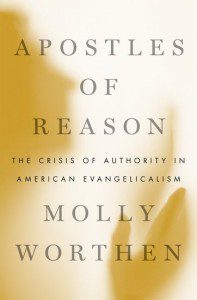 Neo-evangelicalism is, for historians of American religion, an old friend. I’ve met this familiar creature before. He’s [yes, typically the main characters are men] been winsome (William Martin’s Prophet with Honor), heroic (Gregory Thornbury’s Recovering Classic Evangelicalism), disturbing (William Martin’s With God on Our Side), tragic (George Marsden’s Reforming Fundamentalism), savvy (Michael Lindsey’s Faith in the Halls of Power) and even progressive (David Swartz’s Moral Minority). Sometimes, he’s down and out. At other moments, he’s on the verge of a theocratic takeover of the nation and almost certain to invade one foreign country too many. And yet, for all of his accomplishments, he rarely gets the respect and affirmation he craves.

In Molly Worthen’s witty and erudite retelling, evangelicalism is always on the verge of an intellectual meltdown. Fundamentalists-turned-neo-evangelicals traded in the presuppositions of strict inerrancy for the presuppositions of a [Reformed] Christian world view. Having once pretended that biblical authority alone could suffice as a guide for faith and action, they now pretend that Christians should be able to agree on what that world view looks like. Ultimately, evangelicals cannot live in the world of free inquiry and [secular] reason, so they curtail precisely those traits that would finally gain them the intellectual respect of non-evangelicals. “These habits of mind,” writes Worthen, “have crippled evangelicals in their pursuit of what secular thinkers take to be the aims of intellectual life: the tasks of discovering new knowledge, creating original and provocative art, and puzzling out the path toward a more humane civilization.” Of course, as Worthen herself notes, pursuing those tasks have never been evangelicals’ foremost goal. Instead, they want to win the world to Christ, and many of them fear that intellectual pursuits (even on evangelical rather than secular terms) will endanger that higher purpose.

Along the way, Worthen provides an expansive primer on post-1945 conservative Protestantism, discussing everything from ecumenism to politics to the arts. Sometimes, her cast of characters is familiar (Henry, Harold J. Ockenga, Graham, Francis Schaeffer), sometimes more less so. In particular, she introduces a host of non-Reformed “evangelicals”  (or at least fellow travelers), such as John Howard Yoder and Mildred Bangs Wynkoop. Apostles of Reason has its bogeymen, namely Schaeffer and R.J. Rushdoony. Worthen saves her most damning commentary for Schaeffer, whom she terms a “brilliant demagogue.”

One of the great strengths of Worthen’s book is that she explores many of the denominational and intellectual faultlines within the evangelical world while still finding characteristics that tie together the whole.

I never tire of the history of neo-evangelicalism. It’s a story of larger-than-life personalities with out-sized goals, excessive bravado, and considerable naiveté. One knows that there will be considerable heartache along the way and that the largest goals will never be met. And yet, these neo-evangelicals accomplished something that to observers of fundamentalists in the 1920s would have seemed utterly improbable. For me, this story is an area of both academic and personal interest. Having grown up with one foot in the world of parachurch evangelicalism (Young Life and InterVarsity) and encountered through books at least some of the figures in books such as Worthen’s, I always feel a keen interest in my spiritual ancestry.

Worthen’s diagnosis seems quite accurate, but I understand it as more of a Protestant problem than an evangelical or neo-evangelical one per se. As Worthen points out, Catholics and Mormons have found it much easier to found research universities. They have a tradition that provides some ballast. The shibboleth of sola scriptura has burdened Protestantism because it suggests that Christians really can proceed on the basis of the Bible alone. As Mark Noll expertly demonstrated in America’s God, it’s not quite so simple.

There’s no obvious or easy solution to the evangelical predicament (except a decision on the part of evangelicals to no longer be evangelicals, or perhaps to be Catholic or Orthodox evangelicals). However they define it, evangelical fealty to biblical authority prevents a wholehearted embrace of the presuppositions of either modernity or postmodernity. This is true whenever one accepts the authority of either revelation or tradition. But as long as one recognizes that dilemma, and faces it with both humility and hope, one can indeed wholeheartedly embrace the above-mentioned “aims of intellectual life.” None of those goals, after all, conflict with the evangelical goal of sharing the love of Jesus with a world starved for mercy and justice.