William Taylor, a Global Reflex, and the Challenge to Gilded Age Methodism

In my last post I described how evangelical missionaries were often agents of cultural sensitivity. William Taylor, for example, encouraged Xhosa converts in South Africa to continue using “Dala,” “Tixo,” or “Inkosi,” their native terms for God. For Jay Case, author of An Unpredictable Gospel, this was evidence of missionaries’ concern for native empowerment. “To be sure,” he writes, “many missionaries attempted to impose their will on others, and themes of resistance may effectively describe those who did not accept the message brought by missionaries. However, the missionary encounter did not simply encompass imposition and resistance, as many scholars have painted it, or simple proclamation and acceptance, as many evangelicals have described it.” For colonized peoples in the two-thirds world, Case suggests, missionaries were far more preferable than Western corporations or nation-states.

The story of William Taylor also points to a phenomenon that I term the “global reflex.” Missionaries not only shaped foreign contexts, but they themselves were shaped by their experiences abroad. In a Western context preoccupied with “civilizing” indigenous peoples, they saw examples of indigenous effectiveness and sought to emulate them. Missionaries not only adopted new methods, but also became convinced that ordinary, “uncivilized” Christians could build Methodism at home too.

This was an important point for Taylor as he bumped up against a modernizing United States and a gentrifying Methodism. He had little patience for a nation bent on bureaucratization, industrial growth, and technology. Even religious leaders in America, in Taylor’s estimation, had fallen prey to over-systematization. He resented bishops who tried to prescribe geographical boundaries for his evangelistic work and who tried to limit the use of laity in evangelism. He resented when they tried to control his activities through formal review processes. For much of his career, he tried to escape these systems, to work unencumbered by the bureaucracies of the Methodist Missionary Society and the Methodist Episcopal Church, the largest Protestant denomination in the United States. Increasing numbers of Methodists were drawn to this critique and to Taylor’s missionary exploits.

These American Methodists, who opposed modernist systematization and sought to depend more fully on the supernatural, formed the backbone of a burgeoning holiness movement. Its adherents opposed the proliferation of rational planning and “church machinery and ritualism,” as a 1881 writer for the Advocate of Christian Holiness put it. In 1882 Taylor himself declared, “I believe in creating missions in foreign lands by the power of God, but do not believe in a fictitious creation of foreign missions in New York by the policy of men.” His experiences in South Africa, in which he saw untutored men and women spreading the gospel with the help of the Holy Spirit, fed directly into the holiness movement. Case even makes the case that Taylor laid the foundation for “another worldwide movement that nobody saw coming: Pentecostalism.” (For more on how the global reflex helped launch Pentecostalism, you’ll want to read Case’s chapter in the same book on Pandita Ramabai in India.) 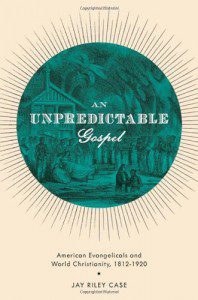 An Unpredictable Gospel is an important book featuring stunning range, penetrating analysis, provocative argumentation, and powerful contextualization. In a field that has long prioritized Reformed history, Case covers underutilized ground in his work on the Wesleyan, holiness, and Pentecostal movements. And methodologically, this book is one of the few histories of evangelicalism to successfully attempt transnational history. In fact, Case extends far beyond the South African story I’m relaying here. Seven other chapters cover African-American evangelical missions to Africa, Baptist missions to Native Americans and the Karen people of Burma, Methodist missions to Latin American, and radical holiness missions to India. Case, who is also a thoughtful blogger, manages to historically position it all within Xhosa oral culture, British colonialism, and American democratization, Reconstruction, and the Gilded Age. Quite a feat for a book that spans the lowlands of Burma; the eastern cape region of South Africa; Macon, Georgia; Garraway, Liberia; and Maharashtra, India.

January 14, 2014
Antebellum African Missions and the Evangelical South
Next Post

January 16, 2014 The Power of Biography
Recent Comments
0 | Leave a Comment
"Although (obviously!) not part of Christianity, I think the whole M*slim thing about images of ..."
Mo Fin Iconoclasts I Have Known, and Even ..."
"You come up with the most fascinating research projects and you always deal with them ..."
GEVeith Iconoclasts I Have Known, and Even ..."
"I think the ESV originated as a conservative alternative to the NRSV, but eventually marketing ..."
NorrinRadd The Gender Inclusive Bible Debate (Medieval ..."
"Why do we want texts of "beauty and transcendence"? Koine Greek was the *common* tongue. ..."
NorrinRadd The Gender Inclusive Bible Debate (Medieval ..."
Browse Our Archives
Related posts from Anxious Bench

Evangelical
Iconoclasts I Have Known, and Even Liked
Anxious Bench
TRENDING AT PATHEOS Evangelical