Gilbreath, an editor at large with Christianity Today and executive director of communications for the Evangelical Covenant Church, focuses his gaze at King’s 1963 “Letter from Birmingham Jail.” Along the way, however, he discusses the sometimes awkward relationship between black and white evangelicals, King’s plagiarism, racial profiling, and — of course — the circumstances surrounding the remarkable 1963 Birmingham campaign. Birmingham Revolution is a short but wide-ranging and very readable book. 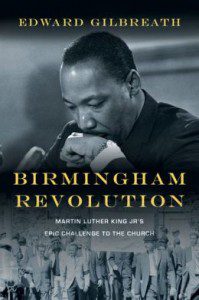 As members of different racial or ethnic groups, we experience the present differently. I can remember four times in the last ten years that I have been pulled over for various traffic infractions. While lost in rural Tennessee, I was going down a hill too quickly and exceeded the speed limit. Once at night in Texas, I was going five miles per hour over the nighttime speed limit. I was on a research trip, and on my own, I’m a complete wreck. Therefore, the back seat was so cluttered with various items of clothing and paper that I couldn’t locate the car rental agreement for around five minutes. The officer was perhaps reassured by the fact that I was on my way to Little Rock to interview a Campus Crusade for Christ official (I didn’t mind sharing that fact). Also in recent years, I was going about fifteen over in a 25 m.p.h.. zone on the border between Orem and Provo in Utah. It was helpful to explain that as a visitor to Utah Valley, I hadn’t noticed that this particular stretch of road was restricted to such a low speed. The officer, barely old enough to serve a Mormon mission, very politely let me off the hook. Most recently, I rather recklessly tried to get around two painfully slow-moving semis on the right shoulder of an interstate highway somewhere in western Virginia.

I know I am jinxing my future luck, but none of these infractions resulted in a ticket. When I did not get a ticket for the egregiously illegal shoulder maneuver, it occurred to me that sometimes it pays to be white (sort of the modern-day wages of whiteness, to paraphrase the title of a book about nineteenth-century race and economics). In fact, in all four of these instances, the police officers were white.

Gilbreath was not so lucky. Two years ago in Atlanta, he was lost. He inadvertently made an illegal left turn. A “towering man with a blonde crew cut” approached his car. Compassionless, the officer gave Gilbreath a full measure of disdain and a $200 citation. Perhaps it was just bad luck. Perhaps the four officers who let me go with warnings would have extended the same courtesy to him. This seems unlikely.

As members of different groups, we also experience the past differently. An African American Campus Crusade for Christ leader once told me of just how awkward it was to hear white evangelical paeans to the nation’s founding and the need for America to return to its golden era of Christian-inspired leadership. Returning to those roots, however, would mean a return to an era of slavery (or, perhaps a bit later, Jim Crow). It is hard for us to remember that different groups of people have experienced the past very differently than have our own ancestors.

Partly because our presents and our pasts are so different, we human beings have a hard time relating to each other. Gilbreath shares his anger about the traffic incident. I can understand that anger analytically, but it is foreign to my own experience. Perhaps similarly, Gilbreath observes that many white Christians today profess their deep respect for “Dr. King” and their desire for a “color-blind society,” while failing to appreciate the depth of anger that King felt when he first encountered racism as a child and toward the end of his life. In the latter case, it was anger over the Vietnam War, and anger over the intractability of residential segregation and economic inequities. We want a safe Martin Luther King, Dr., a safe “Dr. King.” A man with a Ph.D. cannot be all that dangerous.

But many white evangelicals considered King — whom they did not call “Dr. King” back then — highly dangerous. He was a communist, a theological liberal. More recently, white evangelicals have expressed concerns about his adultery and plagiarism. On the issue of plagiarism, I think Gilbreath defends King a bit too strongly, though he correctly observes that “Letter from Birmingham Jail” shows that King’s intellectual capabilities cannot be gainsaid by his earlier plagiarism. Fair enough. It is probably simpler to say that student plagiarism was and is so rampant that it cannot be regarded as a serious moral failing. The adultery charges are more troubling, of course. We want our heroes to be, well, heroic, in all aspects of their lives. King’s very ordinary failings, however, are not what make him significant for us. As Gilbreath explains, he was more of a “tortured soul” than most superficial accounts of his life allow.

King was not a communist, though he was an increasingly strident critic of American capitalism. Was he a theological liberal? Gilbreath is helpful on this point. King speculated that the resurrected Jesus may have been something more akin to an “‘image or apparition’ rather than a literal bodily appearance.” Regardless of how seriously King meant that particular comment, his theology differed from the mainstream of either the black church or the world of white evangelicalism. But King also heard Jesus speak to him at his kitchen in Montgomery. King would not have understood himself as an evangelical, at least not as the word was used in mid-twentieth-century America. But evangelicals today find much to appreciate in his theology, in his understanding of the Gospel, and in his willingness to sacrifice all in the cause of justice and love.

Americans of many different backgrounds love Jesus and espouse similar goals of evangelism, justice, and community. Even for those of good will, those goals are often elusive. They require cooperation. We need models to help us down this road. Gilbreath offers us Martin Luther King, Jr. as one such model, not an easy, superficial King, but a King that challenges all of us to more faithfully follow our Savior. Thanks be to God.

February 6, 2014 Why Study History
Recent Comments
2 Comments | Leave a Comment
"Dr. Jenkins, you mentioned that conservative and reactionary clergy were widely denounced during the great ..."
Tony Of Awakenings, Convulsions, and Writing Christian ..."
"Intriguing! There are many responses I would like go into. However, to keep this short, ..."
Daniel Wilcox Of Awakenings, Convulsions, and Writing Christian ..."
"One more clarification on "southern conservative Baptists like Baptist pastor W. A. Criswell and Moral ..."
Ralph Weitz Can Northern Evangelical Institutions Survive Evangelicalism’s ..."
"Great topic, and a terrific discussion."
philipjenkins Tejano Methodism, Material Culture, and COVID
Browse Our Archives
get the latest updates from
Anxious Bench
and the Patheos
Evangelical
Channel
POPULAR AT PATHEOS Evangelical
1