I posted about the art of mission, the ways in which Euro-American Christians visualized the missionary efforts under way in Africa and Asia. Those pictures give a fine insight into the ideology of mission, helping us understand what believers in that age thought they were trying to accomplish.

We find some superb examples of that process from images of the Jesuit St. Francis Xavier (1506-1552), who for centuries was regarded as perhaps the greatest of all missionaries. Most active in India, he also traveled to Japan, and to what we would now call Indonesia. He was also associated with some spectacular miracles. Catholics particularly liked to depict this great saint because his global ventures stood in such contrast to the geographically limited Protestant ventures of the age. To put this in context, Francis was a near contemporary of John Calvin (1509-64).

Francis Xavier was painted by some major painters of the seventeenth century, including Nicholas Poussin, and the Portuguese André Reinoso. 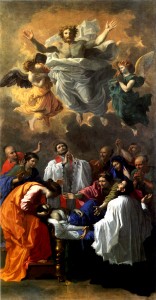 This image depicts him raising an Indian man from the dead. 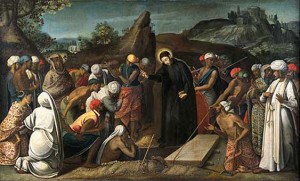 As so often in such pictures, much of the interest attaches to how Europeans imagined Asian people, whom usually they could picture only from description.

By far the greatest such painting, though, was the work of Peter Paul Rubens, which was commissioned for a Jesuit church in Antwerp. It dates from 1619-20, and commemorates Francis Xavier’s beatification. But the date is doubly significant, as that also marked the opening stages of the Thirty Years War. For a few years, it seemed likely that Europe’s great Catholic powers, Spain and the Empire, would soon crush their Protestant revivals. Perhaps Protestantism would soon vanish as thoroughly as the Albigensians had in the Middle Ages. Catholic confidence stood at an all time high. 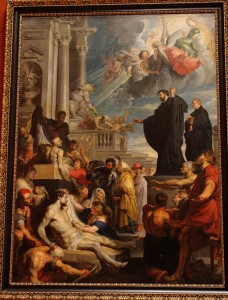 The image I reproduce here is on a very small scale. To understand the picture, you should go to a much larger and more detailed reproduction here. The depiction of the miracle is familiar enough, but note what is happening in the background. As God’s power raises the dead, we see the pagan temple behind – actually, a Hindu temple – and the monstrous horned idol tumbling, to the horror of his devotees. Over the following years, Rubens painted several other panels in the same church depicting ancient saints smashing idols.

The message was as obvious to people at the time as it would be to African or Asian Christians today. Through mission, God’s power reaches into pagan realms held subject to the Devil. Miracles demonstrate divine power, and clear away the Satanic night.

Last year, by the way, the Getty Center in Los Angeles mounted a splendid exhibition on the theme of Looking East: Rubens’s Encounter with Asia. Among other things, this showed Rubens’s interest in contemporary Asian cultures and costumes, and also how missionary activities were teaching Europeans about such matters. There is a valuable collection of essays associated with the exhibit, edited by Stephanie Schrader.

March 11, 2014 “Ask Jesus into Your Heart”: A History of the Sinner’s Prayer
Recent Comments
0 | Leave a Comment
"Overpopulation is already the world's worst problem. I calculate the world's carrying capacity is about ..."
MesKalamDug Fertility and Faith: The Demographic Revolution ..."
"All are correct.... you don’t want anyone to believe in the very God/Jesus that you ..."
D.M.S. The Sexuality Debate Dividing an Evangelical ..."
"Parents who wish to send their children to religious schools often find it financially impossible. ..."
BertB Religion and the Courts: A Level ..."
"Nice, Thanks! Do you recommend any books on TS Eliot?"
Roger McKinney A Sunday Morning in 1915
Browse Our Archives
Follow Us!

Evangelical
When the National Council of Churches Went to...
Anxious Bench
TRENDING AT PATHEOS Evangelical