THE GREAT AND HOLY WAR

Not long since, I posted about my current book project on the First World War, and especially its supernatural and apocalyptic dimensions. That grew out of a long-standing fascination with the period roughly between 1890-1920, and a host of writers I loved – from Conrad, Joyce and Kipling through Arthur Machen and Algernon Blackwood, Jack London and Frank Norris, G. K. Chesterton and H. G. Wells, John Buchan and W. B. Yeats, Robert Chambers and E. F. Benson, M. R. James and Willa Cather … and a great many others. The Great War, of course, marked a radical transformation in that whole cultural scene, as well as so much else.

I’m delighted now to announce the publication of the book itself, under the title The Great and Holy War: How World War I Became a Religious Crusade. 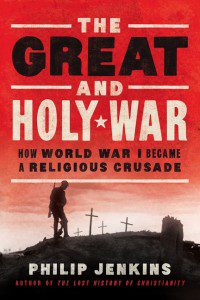 The Great and Holy War offers the first look at how religion created and prolonged the First World War. At the one-hundredth anniversary of the outbreak of the war, historian Philip Jenkins reveals the powerful religious dimensions of this modern-day crusade, a period that marked a traumatic crisis for Western civilization, with effects that echoed throughout the rest of the twentieth century.

The war was fought by the world’s leading Christian nations, who presented the conflict as a holy war. Thanks to the emergence of modern media, a steady stream of patriotic and militaristic rhetoric was given to an unprecedented audience, using language that spoke of holy war and crusade, of apocalypse and Armageddon. But this rhetoric was not mere state propaganda. Jenkins reveals how the widespread belief in angels and apparitions, visions and the supernatural was a driving force throughout the war and shaped all three of the major religions—Christianity, Judaism and Islam—paving the way for modern views of religion and violence. The disappointed hopes and moral compromises that followed the war also shaped the political climate of the rest of the century, giving rise to such phenomena as Nazism, totalitarianism, and communism.

Connecting numerous remarkable incidents and characters—from Karl Barth to Carl Jung, the Christmas Truce to the Armenian Genocide—Jenkins creates a powerful and persuasive narrative that brings together global politics, history, and spiritual crisis as never before and shows how religion informed and motivated circumstances on all sides of the war.

I’m hoping to post on different aspects of this topic in the coming weeks.

April 26, 2014 Moral Minority in Paperback
Recent Comments
3 Comments | Leave a Comment
"The fastest growing religion in Sub-Saharan Africa, Carribean (Haiti, Jamaica, Dominican Republic etc), Central America ..."
Paul Juma Biblical Authority amidst American Christian Division: ..."
"Let us know when your book is on the NYT best seller list."
Enlightened Do Evangelical Churches Have a Catechesis ..."
"It's the habit of historians to use historical examples of practices as proof of the ..."
Leigh Ann It’s A Small, Small (Complementarian) World
"I bet all that "worry about the salvation of those on the left" is your ..."
oneworlddude Do Evangelical Churches Have a Catechesis ..."
Browse Our Archives
get the latest updates from
Anxious Bench
and the Patheos
Evangelical
Channel
POPULAR AT PATHEOS Evangelical
1