THEY GATHERED AROUND A COAL FIRE

THEY GATHERED AROUND A COAL FIRE April 4, 2014 Philip Jenkins

In this coming Easter season, I will be thinking of coal fires, anthrax, and anthracite. The coal fires, especially, are critical to our understanding of the New Testament accounts of the Resurrection. Like all good fires, they shed light – specifically, on how the Gospel of John was composed and edited.

Let me explain those cryptic remarks.

It’s well known that the gospel accounts of the Resurrection differ widely. We can agree totally that the early church believed in a Resurrection (or there wouldn’t be a church), but we can’t be so sure about the where and when, or the exact circumstances. By far our best evidence comes from Paul, writing around 50. In 1 Cor. 15: 4, 7, he writes (KJV),

The appearance to Cephas/Peter is, so to speak, the rock-solid foundation of the tradition. It is recalled in other very early credal statements, for instance in Luke 24.34, “The Lord has risen and has appeared to Simon.” That’s the oldest Christian creed, which even dates to a time before Simon has acquired his standard later name of Cephas/Peter.

I mention this because, over the next few weeks, there will be a great many sermons about Easter and the Resurrection, and that Peter will occupy a very minor part in most such retellings. The overwhelming emphasis will be on Christ’s meeting with the women, and above all with Mary Magdalene, with Peter following along. Some presentations may well lament the early church’s refusal to acknowledge Mary’s primacy as a witness of the Resurrection, because of its general neglect of women’s spiritual gifts. 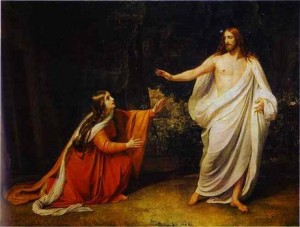 I have already written on the various myths surrounding Mary Magdalene, the point being that Jesus’s actual meeting with the women appears relatively late in the gospel tradition. It’s unknown to Paul, or Mark, or Luke, and Matthew only reports Mary Magdalene as one of a group of women who actually met Jesus. The familiar story of Jesus having the loving, individual, encounter with the Magdalene is known only to John, and can’t be much earlier than 100, a full lifetime after the events described.

It looks as if the earliest account of the first appearance to Peter has dropped out of the gospel record. Or maybe it survives, but in a form we don’t immediately recognize.

As we have it, the Gospel of John is a confused text, with obvious edits and patches, and blocks of material looking like they have been reshuffled from their obvious homes. In this version, Jesus drives the money-changers from the Temple at the start of his mission, rather than as the act that precipitated his final clash with the authorities.

John’s Chapter 20 tells the story of the Resurrected Christ meeting Mary Magdalene, and this comes to what looks like an obvious conclusion for the whole work. “But these are written, that ye might believe that Jesus is the Christ, the Son of God; and that believing ye might have life through his name.” The End. But we then proceed to another story in chapter 21, with the obvious implication that this originally circulated independently of the Magdalene passage, and that the two accounts were integrated, poorly, into the final gospel as we have it. (Obviously, the actual chapter divisions and numbers are a much later invention). Presumably, the editor/author knew the two stories, and did not want to lose either, but was not too successful at bringing them together. 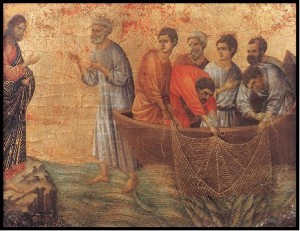 Afterward Jesus appeared again to his disciples, by the Sea of Galilee.It happened this way: Simon Peter, Thomas (also known as Didymus), Nathanael from Cana in Galilee, the sons of Zebedee, and two other disciples were together. “I’m going out to fish,” Simon Peter told them, and they said, “We’ll go with you.” So they went out and got into the boat, but that night they caught nothing. Early in the morning, Jesus stood on the shore, but the disciples did not realize that it was Jesus.

“The disciple who Jesus loved” first recognizes him, but after that, all the emphasis is on Peter, who dives in to swim to Jesus, and then is the only one who engages him in a lengthy conversation. 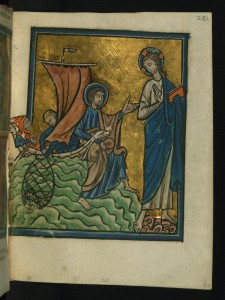 What is happening here? The author/editor presents this as a post-Resurrection appearance, “the third time Jesus appeared to his disciples after he was raised from the dead.” It almost becomes one of a series of visits Jesus pays his followers after the Resurrection, for whatever reason. But taking out that “third time” line, the whole lakeside encounter looks much more like the Resurrection appearance, the critical moment when Jesus appears to Peter, and then to the twelve – fitting the version of the story that Paul knew. 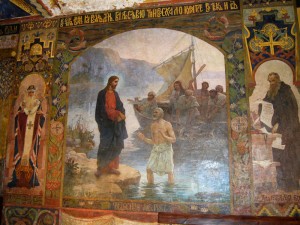 If this was the original version of the story, that would make sense of the odd variant that occurs in Mark and Matthew, in which Jesus’s promise of his Resurrection is associated not with Jerusalem, but Galilee. In Mark 14.28, for instance, Jesus promises that “after I have risen, I will go ahead of you into Galilee” (compare Matt. 26.32). He will rise in Jerusalem, but they will see him only in Galilee.

And that brings me back to coal fires. The Greek word for coal is anthrax, which gives its name to a disease characterized by coal black lesions: we also know the word from anthracite, a high-carbon variant of coal. A charcoal fire is anthrakia, a word that occurs only twice in the New Testament, both times in the Gospel of John. In the first use (18.18), Peter joins a group clustered around a fire for warmth, while Jesus is awaiting trial: Peter then denies Jesus. The second use occurs on the sea-shore, where Jesus has built a fire to cook breakfast for the disciples (21.9). Both passages, in other words, are closely linked, and both directly concern Peter. The linkage is almost heavy-handed, in suggesting that the second meeting is meant to recall the act of betrayal, and to provide an opportunity for Peter to receive forgiveness. One coal fire reproduces and cancels out another.

Actually, the resemblances and parallels are even closer than that. Only by recalling Peter’s triple denial at the first fire can we understand why Christ asks him a further three by the fire on the sea shore. The lake scene only makes sense in light of the earlier encounter in the high priest’s courtyard. The two passages are integrally linked.

In passing, I note that the Peter fragment in John 18 is part of a very early textual tradition. At least, the earliest papyrus fragment of any part of the canonical New Testament is Rylands papyrus P52, which probably dates to around 125, and this includes the passage immediately following that incident – John 18.31-33, and 37-38.

But if that’s correct, that has major implications for the structure of the original account underlying John’s Gospel as we have it now. Most readers of John assume that the narrative proceeds like this:

i. Jesus’s trial and death, then a natural segue to

ii. The Resurrection appearance to Mary Magdalene, followed by

iii. An extraneous postscript describing the additional appearance on the Sea of Galilee.

But in light of what I’ve discussed here, it’s the Magdalene scene that is extraneous. Originally, the narrative of Jesus’s trial, and the intimately connected story of Peter’s betrayal, would have proceeded to a natural conclusion at the Galilean lake. Coal follows coal. As we would expect in a very early gospel, the central figure among Jesus’s followers, and the key Resurrection witness, is Peter.

At some later phase, an editor has added another Jerusalem-based story focused on Mary Magdalene, which we now know as John 20. Where that story came from, or how early it might been, is open to debate. But it was the Magdalene passage, not the Galilee scene, which is the later addition. Possibly several decades later.

I think what we are dealing with here is two very distinct traditions of Jesus’s Resurrection, one based in Galilee, one in Jerusalem, and they had major areas of disagreement. Paul, clearly, knew the Galilean version, inevitably since his direct contacts were with the disciples themselves. Conceivably too, that version was much earlier and more authoritative than the other. Beyond debate, the Galilean version is documented much, much, earlier than the other. But other stories circulated, and the various evangelists tried with varying success to integrate both.

As we commemorate Easter this year, perhaps we should think at least as much of the Sea of Galilee as the Jerusalem garden.

April 7, 2014 THE EMPTY TOMB
Recent Comments
14 Comments | Leave a Comment
Browse Our Archives
get the latest from
Anxious Bench
Sign up for our newsletter
POPULAR AT PATHEOS Evangelical
1