American Religion and Freemasonry May 15, 2014 johnturner

Freemasonry is a tricky topic for historians of American religion, both in terms of classification and in terms of content. Masonry confuses, in part because of the many changes within its ranks over the course of the eighteenth and early nineteenth centuries. Still, good books exist on the topic, such as Stephen Bullock’s Revolutionary Brotherhood.

David Hackett’s recently published That Religion in Which All Men Agree: Freemasonry in American Culture is a very helpful guide to those who still find Masonry mystifying. In particular, Hackett extends Bullock’s story (which ended in 1840) through the early decades of the twentieth century and pays attention to the position of African Americans, Catholics, and Jews within the fraternity. 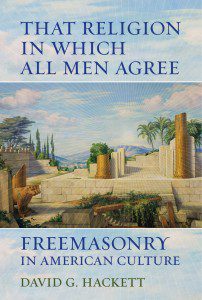 Rather than a review, I thought readers might benefit from the following information about American Freemasonry that I gleaned from Hackett’s book.

▪ Why “Freemasonry”? The fraternity traces itself back to eleventh-century Britain and the establishment of masonic craft guilds. “Freemasons” were those “fully qualified craftsmen free to enjoy the rights and privileges of the guild.” Guild members narrated a mythical history emphasizing their craft’s antiquity, initiated new members into their brotherhood, and carefully limited membership to those properly trained in their skills. Secret passwords developed to police membership boundaries.

▪ That mythical history traced the origins of geometry to Jabel, a biblical son of Lamech who inscribed his knowledge on stone pillars. Those secrets thus survived the flood and were rediscovered by Hermes, a great-grandson of Noah. Eventually, Abraham took these sciences to Euclid. Euclid in turn taught them to David, who used them to instruct the masons who began building the Jerusalem Temple. Thus, the myths traced Masonic origins to both “the author of Biblical wisdom, Solomon, and the source of occult knowledge, Hermes.” Freemasonry could thus claim to be Christian and to transcend Christianity through connections to more universal sources of ancient knowledge.

▪ Although it would take too long to capitulate them here, Hackett provides a helpful overview of the split between “Ancients” and “Moderns” that began in the 1740s. He also explains the emergence of both Scottish Rite and the York or American Rite that includes the Royal Arch. Readers unfamiliar with the narrative of Hiram Abiff will also find a concise summary of that important myth.

▪ Most Freemasons did not consider their fraternity to be a religion but recognized its religious and sacred character. Many saw it as a complement to Christian churches, a handmaid of religion, an Enlightened sacred fraternity which transcended the divisions of churches and denominations. Thus, for much of the eighteenth century, Freemasonry and American Protestantism coexisted rather peacefully. Freemasonry primarily attracted “latitudinarian” Protestants, especially Episcopalians and less evangelical members of other denominations. In its American context, as Hackett puts it nicely, Freemasonry was to the left of evangelical sectarianism and right of Enlightenment skepticism.

▪ Hackett’s book reminds the reader of just how central Freemasonry was to American public life during the second half of the eighteenth century. “Freemasonry,” he writes, “was the most successful colonial organization in crossing political, ethnic, and religious boundaries among leading affluent white men.” To become a Mason “was to share in the values and behavior of America’s emerging elite.” Thousands, then tens of thousands of men, joined. Protestant ministers joined. Masons were a visible part of American public life during the closing decades of the eighteenth century, and Freemasonry became more overtly Christian and republican during these years. No one living in an American city in the 1770s or 1780s would have been unaware of the public importance of Freemasonry, I think.

▪ In the closing years of the eighteenth century, and again in the late 1820s, conservative Protestants sharply objected to the secretive nature of Freemasonry and depicted it as a cabal that threatened men’s proper loyalty to God and country. The Anti-Masonic movement that began in earnest with the 1826 disappearance of David Morgan primarily attracted evangelical Protestants. Anti-Masonry’s challenge was strong enough to significantly reduce the ranks of American Freemasonry, but the fraternity began a strong recovery by the 1840s.

It occurred to me while reading Hackett’s book that I’ve never once mentioned Freemasonry in my introductory courses on the history of American religion, with the possible exception of its connection to the Latter-day Saint endowment ceremony. I’m still not certain how I would integrate into it such courses (perhaps in connection with the American founding), but to skip Freemasonry misses a useful opportunity of defining or refining our understanding of what “religion” and “Christianity” included and excluded in colonial and nineteenth-century America.

May 16, 2014 SEEING IT THROUGH
Recent Comments
6 Comments | Leave a Comment
"Isn't Mary Stewart Van Leeuwen, who wrote Gender and Grace in 1991, from the Reformed ..."
Tatiana Kuzmic The Cost of Staying Silent
"Paul wrote at the end of Romans to avoid those who cause divisions over non-essential ..."
Roger McKinney Will Reformed Evangelicalism Divide Over Racial ..."
"It appears that God was not finished with Lindbergh, at least at the point where ..."
stefanstackhouse The Conversion That Never Happened
"Everyone really should read the David French article referenced above. https://frenchpress.thedisp..."
Rod Bristol Survival and Resistance in Evangelical America
Browse Our Archives
get the latest from
Anxious Bench
Sign up for our newsletter
POPULAR AT PATHEOS Evangelical
1