MASONS AND CATHOLICS May 23, 2014 Philip Jenkins

I have been posting on the pervasive influence of Freemasonry in Anglo-American culture. Usually, that tradition was very wide-open and generous in terms of its racial and religious attitudes, but there is one enormous exception to that rule, and that concerns Roman Catholics. Indeed, much of European and American politics over the past two centuries has involved a running and often bitter confrontation between Masons and Catholics. Why is that?

As a social and political movement, modern Freemasonry developed in the British Isles, in the early eighteenth century. It was devoted to the idea of brotherhood, and admitted anyone who could subscribe to belief in one God, however that figure was imagined. Christians, Jews and Muslims all qualified under that criterion, as did any Hindus who could assert that the various gods of that faith were manifestations of a higher monotheism.

So why not Catholics? Initially, the hostility derived from Catholics themselves. Masons were quite happy to admit Catholics, but the Catholic Church in absolutist Europe was highly nervous about what they saw as a Protestant-derived cult that taught radical ideas of broad religious tolerance. Also arousing suspicion was the very strong ancient Roman and Roman Law dislike of secret societies of any and all kinds, on the basis that secret groups must have something wicked to conceal. That assumption was all the more likely when the group in question demanded that its members swear oaths of secrecy, framed in astonishingly bloody terms.

Various Popes sternly forbade Catholics from joining lodges. In the words of the pioneering 1738 document,

Now it has come to Our ears, and common gossip has made clear, that certain Societies, Companies, Assemblies, Meetings, Congregations or Conventicles called in the popular tongue Liberi Muratori or Francs Massons or by other names according to the various languages, are spreading far and wide and daily growing in strength; and men of any Religion or sect, satisfied with the appearance of natural probity, are joined together, according to their laws and the statutes laid down for them, by a strict and unbreakable bond which obliges them, both by an oath upon the Holy Bible and by a host [sic] of grievous punishment, to an inviolable silence about all that they do in secret together. But it is in the nature of crime to betray itself and to show itself by its attendant clamor. Thus these aforesaid Societies or Conventicles have caused in the minds of the faithful the greatest suspicion, and all prudent and upright men have passed the same judgment on them as being depraved and perverted. For if they were not doing evil they would not have so great a hatred of the light.

By 1917, a Catholic who joined a Masonic Lodge faced automatic excommunication. 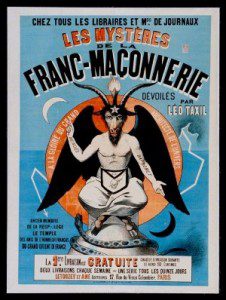 Lest you think that I am putting all the blame on one side, Masons in various countries did become viscerally anti-Catholic and anti-clerical, and lodges became the foci of radical political movements aimed at undermining the established royal and Catholic ancien regime. You get a wonderful sense of the political significance of Freemasonry from modern histories of the Radical Enlightenment by Margaret Jacob and Jonathan Israel.

That radical Masonry found its manifesto, and its greatest monument, in Mozart’s Magic Flute (1791). I quote Ritchie Robertson’s essay “Freemasons vs Jesuits”:

“Freemasonry flourished especially in Vienna, where a particularly famous lodge was “Zur wahren Eintracht” (True Harmony). Its grand master, Ignaz von Born, is often said to be the original of Sarastro in The Magic Flute. He was a well-known mineralogist, and sought to make his lodge into a centre of literary and scientific activity. He showed his versatility by also writing an extremely scurrilous anticlerical satire, Specimen monachologiae methodo Linnaeana, which purported to classify the various monastic orders as species in the manner of Linnaeus and defined the monk as “an anthropoid, cassock-wearing, thirsty animal that howls at night”.

In the late nineteenth and early twentieth centuries, Freemasonry became the principal vehicle for militant secularism and anti-clericalism. Those struggles almost led to overt civil war in France in the Dreyfus years, and they actually did spark armed violence in Spain and Mexico in the 1930s. It is scarcely an exaggeration to say that if you ignore Freemasonry, you have no hope of understanding Mexican history over the past century or so. Meanwhile, Masonic support of Jewish emancipation in Europe provoked reactionary denunciations of the “Masonic-Jewish” conspiracy, which was later expanded to include Bolsheviks. 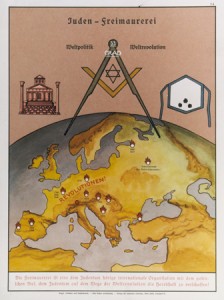 Masons came to occupy a primary place in Nazi and ultra-Right demonology. 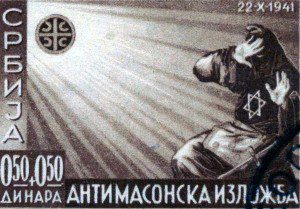 Matters were of course very different in the Anglo-American world, but Freemasons had a progressive bent. At least nine of 56 signers of the Declaration of Independence were Masons.

Through the nineteenth century, Freemasons and Catholics remained at odds over such issues as Catholic Emancipation, public education, and immigration. Masonic lodges tended to be anti-Catholic, and to be linked, explicitly or otherwise, to anti-Catholic mass movements. 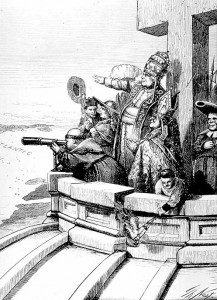 This rivalry existed at all levels of society. Protestants enjoyed the great advantages of the Masonic order, in supplying mutual support in times of trouble, and also in creating invaluable networks in business, law and government. Feeling themselves excluded, the growing immigrant population (mainly Catholics) created their own pseudo-Masonic counterparts, most successfully the Knights of Columbus, which dates from 1882. 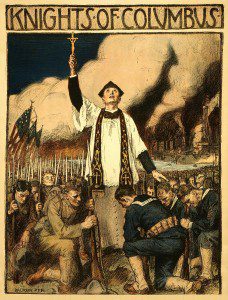 Although not well remembered today, the great American popular movement of the late nineteenth century was the American Protective Association, which preached radical anti-Catholicism, and prepared to resist a feared Catholic coup d’état. Founded in 1887, the movement’s support ran into the hundreds of thousands at least, chiefly in the Midwest. Its founder was Henry F. Bowers, a Freemason, who structured the movement on Masonic lines, with regalia, oaths and initiations. The APA oath specified that, 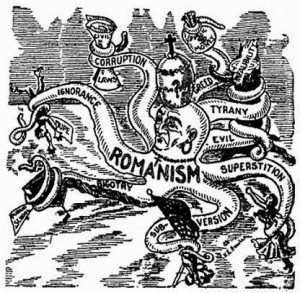 Similar Masonic precedents marked the post-1915 Ku Klux Klan, which became a national US phenomenon between 1921 and 1926, drawing perhaps five million members at its height. And at this stage, the KKK was at least as heavily devoted to anti-Catholic and anti-immigration causes as to anti-Black racism. The Klan found its local leadership in Masonic lodges, and especially among local clergy. In order to appeal to Masons and other fraternal organizations, the Klan offered a rich mythology and heraldry, with all the mystique implied by its hierarchy of “Hydras, Great Titans, Furies, Giants, Exalted Cyclops, Terrors,” its distinctive secret language, and an elaborate system of progressive initiations, of signs and countersigns. (I published on this at some length in my 1997 book Hoods and Shirts). 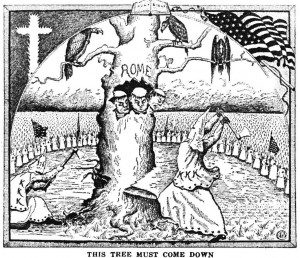 It’s an oddity of US political history that histories of the mighty Klan of the 1920s pay so little attention to the APA, which was its immediate ancestor.

This political alignment created some outcomes that look distinctly odd today. If you look at Klan or Masonic literature in the 1920s and 1930s, you find a list of political concerns that look surprisingly, well, Left-wing. Masons favored strict secularization in the public schools, as a bulwark against Catholic incursions. They also fought hard against foreign interventionism: Catholics, on the other side, were pushing for armed US intervention against the anti-clerical Masonic regime in Mexico, and later against the anti-clerical Left in Spain.

In the US and Britain, these interfaith tensions focused on Masons and anti-Masonic conspiracy theories declined in later years, but they remained strong elsewhere, particularly in regions with populations derived from Ulster or Scotland. The Orange Order, so powerful in such lands, is a close relative of Freemasonry. 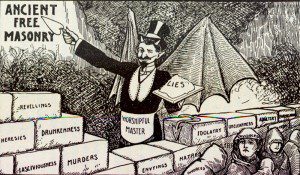 So this is a long and complex history, but one with political ramifications across the West. 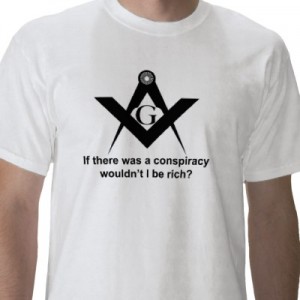 May 26, 2014 Why is that church so ugly?
Recent Comments
35 Comments | Leave a Comment
Browse Our Archives
get the latest updates from
Anxious Bench
and the Patheos
Evangelical
Channel
POPULAR AT PATHEOS Evangelical
1