I recently published the book The Great and Holy War, about the religious and apocalyptic dimensions of the First World War era. Looking at the best-selling books of those years gives us a sense of the strong and diverse religious interests of that time, and the results are often surprising. Who for instance would think that even H. G. Wells would pen something like a spiritual classic, in his 1916 title Mr. Britling Sees it Through?

But 1916 also brought other surprises, especially in George Moore’s now largely forgotten work The Brook Kerith. This is an impressive book in its own right, but it also makes nonsense of the common mythology that suggests that only in very recent times have a few daring scholars dared challenge official interpretations of the Early Church. Moore’s work shows how very commonplace remarkably radical opinions were a century ago. The book was very popular in its time, and it went through multiple editions. 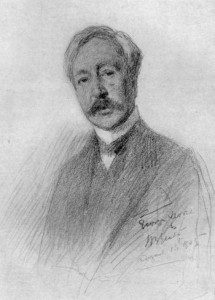 Moore himself is commonly regarded as one of the first modern Irish novelists. 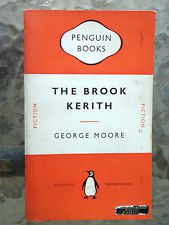 The book tells the story of Jesus of Nazareth, both before and after the crucifixion, which Jesus survives. Indeed, his most important character growth occurs after his supposed death, as he realizes with horror the hatred and drive for power which had motivated much of his mission. He comes to realize that the ultimate truth is the non-religious philosophical view that “there is but one thing… to learn to live for ourselves, and to suffer our fellows to do likewise.”

Moore portrays Jesus and his followers as deeply interested in the intellectual movements of the ancient world, including the ideas of Heraclitus and the Greek philosophers, and the rich melange of ideas to be found in Alexandria. Much of the novel involves the Essenes and their “cenoby” (monastery) of Kerith, in which Jesus both begins his mission, and spends his latter days. That of course was written long before the discovery of the Dead Sea Scrolls.

Moore argues that Christianity was founded on fundamental mistakes, both about the resurrection of Jesus, and his original goals. In his retirement at the cenoby, Jesus is visited by a sinister and power-hungry Paul, who informs him about the directions in which his new religion is leading, and presents the incomprehensible new doctrine of “the death and resurrection from the dead of the Lord Jesus Christ, raised from the dead by his Father.” An Aramaic-speaking Jesus has to ask the meaning of the unfamiliar term “Christ,” only to be informed that it is a newly-coined Greek word.

The book climaxes with a bizarre discussion in which Paul sets forth the elaborate mythology that has grown up around Jesus, his death and resurrection. Jesus himself explains at length why every word of it is bogus or distorted, only to have Paul dismiss him as a madman or, worse, a demon.

After Jesus had asked him how it was that he who had travelled the world over had never turned into Galilee, he replied that the human life of Jesus in Galilee concerned him not at all and his teaching very little. … A teacher Jesus was and a great teacher, but far more important was the fact that God had raised him from the dead, thereby placing him above all the prophets and near to God himself.

I believe, Jesus answered, that the Jesus that spake to thee out of a cloud never lived in the flesh; he was a Lord Jesus Christ of thy own imagining, and I believe, too, that if we had met in Galilee thou wouldst not have heeded me, and thou wouldst have done well, for in Galilee I was but a seeker; go thou and seek and be not always satisfied with what first comes to thy hand.

These words provoked a great rage in Paul, and believing Jesus to be an evil spirit come to tempt him, he turned fiercely upon him, threatening him with his staff, bidding him begone. But as he could not desert Paul in the wilderness Jesus dropped behind him and directed Paul’s journey, bidding him tread here and not there, to avoid the hill in front of him, and to keep along the valley.

Repeatedly, Jesus tries to put his career into perspective:

But, Paul, I did not speak of myself as the Messiah, but as an Essene who during some frenzied months believed himself to be the Messiah.

But, shepherd, Paul answered, the Messiah promised to the Jews was Jesus of Nazareth, who was raised by his Father from the dead, and thou sayest that thou art the same. If thou didst once believe thyself to be the Messiah thou hast repented thy blasphemy. Let us talk no more about the Messiah.

In the desert these twenty years, Jesus answered. But not till now did I know my folly had borne fruit. Nor do I know now if Joseph knew that a story had been set going. It may be that the story was not set going till after his death. Now it seems too late to go into the field thou hast sown with tares instead of corn.

To which Paul answered: it is my knowledge of thy seclusion among rocks that prompts me to listen to thee. The field I have sown like every other field has some tares in it, but it is full of corn ripening fast which will be ready for the reaping when it shall please the Lord to descend with his own son, Jesus of Nazareth, from the skies.

As soon as the words Jesus of Nazareth had left his lips Paul regretted them, for he did not doubt that he was speaking to a madman whose name, no doubt, was Jesus, and who had come from Nazareth, and having got some inkling of the true story of the resurrection had little by little conceived himself to be he who had died that all might be saved.

Discovering the imposture that has occurred in his name, Jesus must be dissuaded from going to Jerusalem to state and prove that he was not raised from the dead by any supernatural means: “the lie has spread… and will run all over the world even as a single mustard seed.”

Ultimately, he joins the itinerant Indian monks who have been evangelizing the Judean countryside – presumably Buddhists – and he will travel with them back to their homeland.

While [Paul] sat at supper he remembered Jesus again, and while thinking of his doctrines and the likeness they bore to those the Indians were preaching, some words of Jesus returned to him. He had said that he did not think he was going back to the Brook Kerith, and it may well be, Paul muttered, that in saying those words he was a prophet without knowing it. The monks from India will meet him in the valley, and if they speak to him they will soon gather from him that he divined much of their philosophy while watching his flock, and finding him to be of their mind they may ask him to return to India with them and he will preach there.

And already, back in 1916, those were the themes of a best-selling religious novel.

Why was it such a hit at this time, I wonder? I turn to Robert Graves’s remark from 1956:

It is in wartime that books about Jesus have most appeal, and The Brook Kerith first appeared some forty years ago during the Battle of the Somme, when Christ was being invoked alike by the Germans and the Allies for victory in a new sort of total war. This paradox made most of us English soldiers serving in the purgatorial trenches lose all respect for organized Pauline religion, though still feeling a sympathetic reverence for Jesus as our fellow-sufferer […] Moore’s story – at the end of which Paul dramatically disowns the real Jesus […] and goes off to preach the transcendent Jesus Christ of his own epileptic imagining among the Italians and Spaniards – made good cynical sense to us.

There is a good account of the novel and its background in Jennifer Stevens, The Historical Jesus and the Literary Imagination, 1860-1920 (Liverpool University Press, 2010). Harold Orel has a chapter on the book in his Popular Fiction in England, 1914-1918 (University Press of Kentucky, 1992).

June 2, 2014 TECTONIC FAITH
Recent Comments
1 Comment | Leave a Comment
"The fastest growing religion in Sub-Saharan Africa, Carribean (Haiti, Jamaica, Dominican Republic etc), Central America ..."
Paul Juma Biblical Authority amidst American Christian Division: ..."
"Let us know when your book is on the NYT best seller list."
Enlightened Do Evangelical Churches Have a Catechesis ..."
"It's the habit of historians to use historical examples of practices as proof of the ..."
Leigh Ann It’s A Small, Small (Complementarian) World
"I bet all that "worry about the salvation of those on the left" is your ..."
oneworlddude Do Evangelical Churches Have a Catechesis ..."
Browse Our Archives
get the latest updates from
Anxious Bench
and the Patheos
Evangelical
Channel
POPULAR AT PATHEOS Evangelical
1