Slow Church: A Report from the Trenches 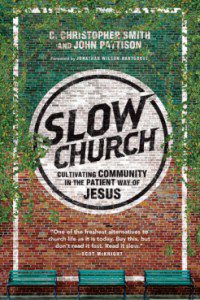 As an admirer of the Englewood Review of Books, I have been anticipating the release of Slow Church. Now that it’s in my hands, I’m happy to report that it doesn’t disappoint. I am thoroughly convinced by the book’s critique and vision. I’ll leave the close outlining of the book’s contents—on ethics, ecology, and economy—to others who have already done so. Instead, I want to offer a report on the book’s potential audience from my small corner of the world: a small Wesleyan liberal arts college in central Kentucky. Based on my interaction with students here, I expect that many will be compelled by its vision.

Each year I teach a course on World Civilizations. Together students and I trace the rise of the supremacy of the market (capitalism); of technology and gears of production (industrialization); of the organization of society on the basis of efficiency and calculation, not morality, emotion, custom, or tradition (rationalization); of the absolute sovereignty of nations within their borders (nation-state), and of the strong belief in progress. It’s the story of modernity.

My students find much to like about modern development. In the case of industrialization, they note the abundance of food (even oranges in wintertime!). But they also articulate some of the downsides—Cheese Whiz, Twinkies, pollution, global warming, stunning levels of wealth inequality—and are surprised at the length and magnitude of the list. Modernity has not come through on all it has promised. My students, many of them from Appalachia, know these realities all too well.

At the end of the course, we talk about alternatives to excesses of modernity. We discuss the virtues of gardening, reading from books with actual pages, sitting on front porches in the evening and visiting with neighbors, fasting from social media, and so on. Essentially, this is the vision of Chris Smith and John Pattison’s Slow Church.

Then, in a kind of culminating experience, I try to give them a taste of what we’re talking about. Here’s the assignment: 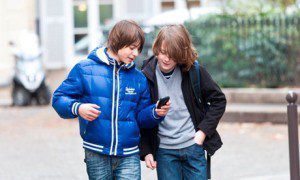 It’s a modest assignment than gets immodest reactions. One young man balked completely, told me that social media was his total existence, and spent his two pages justifying his refusal to be still and contemplative for 90 minutes. But a good half of my students wax nostalgic for a time they’ve never really known. They exult on how refreshed they feel and pledge to integrate slowness into their daily routine. I have no way of knowing how many are just sucking up or how many actually follow through. But it seems like I’m hitting a nerve.

On the last day of class, we recite some Neil Postman together. “Loving Resistance Fighters” are people who “pay no attention to a poll unless they know what questions were asked and why; who refuse to accept efficiency as the pre-eminent goal of human relations; who have freed themselves from the belief in the magical power of numbers, do not regard calculation as an adequate substitute for judgment, or precision as synonymous for truth; who are, at least suspicious of the idea of progress, and who do not confuse information with understanding; who take seriously the meaning of family loyalty and honor, and who, when they ‘reach out and touch someone,’ they expect that person to be in the same room; who take the great narratives of religion seriously and who do not believe that science is the only system of thought capable of producing truth; who admire technological ingenuity but do not think it represents the highest possible form of human achievement” (Technopoly, 183-84).

I’ve noticed more raised jaws, intense eyes, and fervent voices than I expected. I have hope.

Evangelical
Good News to All Nations: An Interview with...
Anxious Bench
TRENDING AT PATHEOS Evangelical