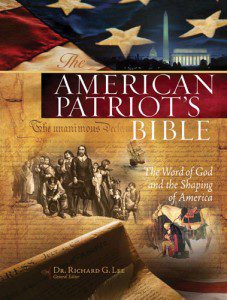 The Bicentennial Bible (1975) and the American Patriot’s Bible (2009) tie scripture closely to right-wing politics. The marginal notes feature quotations from Dick Cheney and other conservative activists on the subjects of liberty and the efficacy of public school prayer and free-markets. The Bicentennial Bible declares that Scripture is “America’s Book from Almighty God.” These biblical editors, though literalists and inerrantists, see America all through a sacred text that conspicuously lacks any mention of America. And yet they wring their hands over a growing unwillingness by Americans to link the purposes of God to the nation. If anything, observes Princeton’s Seth Perry in the most recent Religion and Culture Web Forum at the University of Chicago Divinity School, the sense of embattlement has gotten more intense since the 1970s. The Patriot’s Bible issued a “call to arms” to reverse the nation’s rapid drift from biblical foundations.

Given the intensity of these Christian nationalist voices, it can be easy to equate them with broader American evangelicalism. But in fact, as Perry shows, there is a real range of evangelical opinion and special-interest Bibles, some that far precede contemporary right-wing versions. The Patriot’s Bible, rooted in an eschatological perspective known as premillennialism, represents a very particular reading of Scripture and American history that emphasizes declension from earlier ideals. But the Woman’s Bible (1895-98) of a century earlier was certainly not a conservative text. Supporting suffrage, it represented a postmillennial view that history is ever progressing toward equality.

I want to extend Perry’s observation by discussing some contemporary evangelical interpretations of the Bible and America that look very different from the kind of Christian nationalism represented by the Patriot’s Bible. Perhaps most vehement in recent years have been neo-Anabaptists, who enjoy growing influence among evangelicals. Each July 4 a battalion of prominent bloggers that include Kurt Willems, Benjamin Corey, Greg Boyd, and writers affiliated with the MennoNerds network issue posts such as “A Liturgy of Confession and Allegiance for July 4th” that push back against American jingoism. 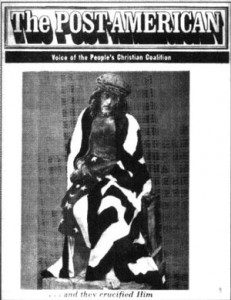 This evangelical Anabaptist phenomenon began back in the 1970s. The numbers were far lower then, but the intensity was not. The Post-American tabloid (now known as Sojourners) featured a signature blend of evangelical piety, leftist politics, and anti-nationalism. The first issue, which came out in the fall of 1971, featured a cover of Jesus wearing a crown of thorns and cuffed with an American flag that covered his bruised body. America, the depiction implied, had re-crucified Christ. Inside, “A Joint Treaty of Peace between the People of the United States, South Vietnam and North Vietnam” declared that the American and Vietnamese people were not enemies and called for the immediate withdrawal of U.S. troops. The “American captivity of the church,” founder Jim Wallis continued, “has resulted in the disastrous equation of the American way of life with the Christian way of life.”

Piling on have been evangelical historians represented at hundreds of state universities and Christian liberal arts colleges. In the 1970s and 1980s they were led by a scholarly triumvirate made up of Robert Linder (Kansas State), Richard Pierard (Indiana State), and Robert Clouse (Indiana State). In the 1980s Mark Noll and George Marsden conducted a sometimes-combative dispute with Francis Schaeffer over the notion of Christian America. And more recently, Warren Throckmorton of Grove City College and John Fea of Messiah College have taken on David Barton and enlisted dozens of colleagues in opposition to his flood of books, speeches, and videos. Largely due to their activism, publisher Thomas Nelson in 2012 pulled Barton’s book The Jefferson Lies.

To be sure, there are millions of fundamentalists and evangelicals on the ground who still espouse a patriotic narrative, but a formidable evangelical brain trust stands united in support of the kind of nuance and context practiced by the broader historical guild.

July 23, 2014 Joseph Smith and the Book of Abraham
Recent Comments
0 | Leave a Comment
Browse Our Archives
get the latest from
Anxious Bench
Sign up for our newsletter
POPULAR AT PATHEOS Evangelical
1

Evangelical
When Baptists Believed in the Bible—and Bourbon
Anxious Bench 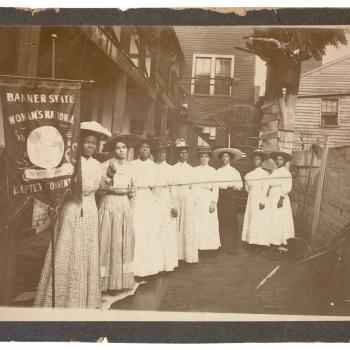