Beth Barr, Tommy Kidd and myself have all been posting on the subject of writing and publishing, particularly of academic books.

All of us trod lightly on one of the most important aspects of all, namely how someone goes about choosing a topic in the first place. In some cases, it’s easy. You might for instance find a key event that has not been covered in the recent past, or a significant historical figure who is long overdue for a biography. Sometimes, such choices are easy. In Britain at least, publishers’ wisdom holds that there is room every five years or so for a new biography of Napoleon.

Some topics are so obvious that they are almost too attractive. British humorist Alan Coren once asked a publisher what were the surefire topics to sell books, and he was told: golf, cats, and Hitler. Hence the book he published, Golfing for Cats, with a swastika on the cover. 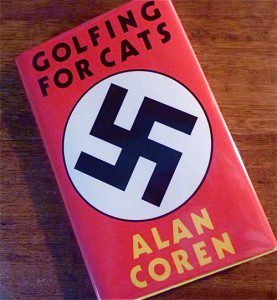 But let’s treat the topic a bit more seriously….

By the way, much of what I have to say here applies to research topics more generally, including graduate papers and dissertations. Think of this as my offering for the new academic year that starts horrifyingly soon!

The starting point is always that of audience or readership, of defining who you want to speak to in your writing, and what that audience can reasonably be assumed to want. That means knowing something about what readers might reasonably be expected to know about, and even more significant, to care about.

This all gets to the issue of whether a topic can be defined as “important,” which is a highly flexible and subjective matter. If you can argue that a topic is important to wider affairs, that people would be interested in it, and yet it really has not been covered recently (or ever) – then you have a winner!

When I pick up a book (in History, for example), several points will make me decide whether or not to read it. What does the book tell us that was not previously known? How does the book fit into the existing literature, yet advances beyond previous knowledge? What earlier or established position is it arguing against?

Crudely, here are a series of criteria that are helpful in deciding whether a particular topic is worth pursuing:

*Is the central idea of the project important? How can you make a case for that – important to what or whom?

*Does it have some contemporary relevance? Or at least, can we make a case that it is? I groan a little there, having seen so many books over the past few years which strain desperately at “relevance.” Often they adapt the subtitle of “The [fill in the blank] that Saved [or Made, or Transformed] America.” Some of those are really beyond parody. And also remember that issues that are red-hot topics today might not remain so for very long. If you write about them, then your book is going to look very dated indeed when it comes out in three or five years.

*Is it exciting or dramatic? Does it offer lively personalities or interesting incidents?

*Is it obscure, in the good sense of not being well known even to a well-informed general reader? Even the best known historical incidents might well fall into this category, in the sense that you might have something new and startling to say about some otherwise unknown event linked to Gettsyburg or D-Day. Put another way, what makes it surprising?

*Is it counter-intuitive? Does it run counter to what a well-informed general readership believes to be the case? Does it contradict “what everybody knows” about the story, or does it revolutionize conventional wisdom?

*Is it based on novel or surprising sources?

*Can I use a counter-factual argument? Might I argue that things would have gone radically differently if matters had developed otherwise at this particular point?

It also helps to write a personal inventory of what you personally bring to a particular project. What skills or background or expertise do you have that makes you more capable of writing this than anyone else?

As an indispensable first step, you have to know the general field you are working in. Then, when you read those other people writing about the subject, do you find yourself saying “Hold on, everyone seems to make that point, but it’s just not right. I mean, from my own observation, I know X”?

Do you have some specific knowledge of a particular area/culture/topic that other writers don’t, that you can use as the basis for a case-study?

Finally, remember that you are going to be living with these issues, these sources, these debates, for several years. Are you interested in them sufficiently to make that investment?

August 25, 2014 She Treasured It In Her Heart
Recent Comments
1 Comment | Leave a Comment
Browse Our Archives
get the latest from
Anxious Bench
Sign up for our newsletter
POPULAR AT PATHEOS Evangelical
1