I posted recently on the Greek empires that arose in the centuries following Alexander the Great, like the Ptolemaic regime in Egypt, and the Syrian-based Seleucid Empire. Specifically, I suggested that these realms shaped the worlds of Rabbinic Judaism and Early Christianity. This was nowhere more true than in their ideologies of kingship and government. Both Jews and Christians reacted forcefully against the divine pretensions of those kings, and that reaction has left powerful traces in the Bible.

When Alexander launched his invasion of the Persian realm in 334, Greek kingship was very different from the Asian forms of power that are sometimes stereotyped as “Oriental despotism.” At least initially, Macedonian kings like Alexander did not claim a divine right to rule in anything like the Persian sense. Rapidly, though, Alexander’s successors adopted Persian and Egyptian concepts of divine kingship. Between about 300 and 63 BC, Seleucid kings regularly bore such titles as Soter (Savior) and Epiphanes (“Made Manifest”, as in Epiphany).

Initially, a title like “Soter” might reflect praise for a military victory, but over time, the religious claims became more explicit. Court ceremonial developed apace, mimicking Persian court ceremonial, as did titles and court formulae. Kings wore elaborate crowns and diadems. They were gods on earth, and expected to be treated as such. The king was no mere first among equals but a Lord, a despotes.

This was the world into which the Romans arrived during the third century. Initially, the republican Romans were appalled and amused at these “Eastern” pretensions, but increasingly, Roman leaders themselves succumbed to these ways. Rome had absorbed the Seleucid realm by 63 BC and Egypt by 30, and eastern Roman cities celebrated a religious cult of Rome and the emperors. By the third century AD, the emperors abandoned their pretenses of constitutional rule, and we enter the period known as the Dominate, with its florid court rituals.

It is against this background that we see for instance the Jewish rebellion against the Seleucids in the 160s, the Maccabean revolt. In the Book of Daniel we find apocalyptic visions of divine vengeance against earthly kings who claimed godlike status.

That royal usage also helps us explain the words for lordship employed in the New Testament (kyrios, despotes), and the rejection of Gentile precedent. In  Luke 22, Jesus tells his disciples, “The kings of the Gentiles lord it over them [kyrieuousin]; and those who have authority over them are called ‘Benefactors.’ But it is not this way with you, but the one who is the greatest among you must become like the youngest, and the leader like the servant.”

Hellenistic kings loved to be called Euergetes, the word translated here as Benefactor. The title was adopted by two of the Egyptian Ptolemies and by one Seleucid Antiochus, as well as by rulers of upstart kingdoms like Pontus and Pergamum. Coins spread their titles and pretensions far afield across the Hellenistic and early Roman worlds. 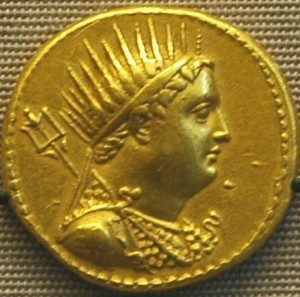 Jesus’s disciples of course had little direct knowledge of those rulers themselves, but they certainly knew about the later sovereigns who had inherited those ideologies, above all the Herodian dynasty, and its “Benefactors.” They also knew about Roman rulers.

The reaction against Hellenistic theories of power is most evident in Revelation, where the blasphemous practice of the imperial cult is what makes a city like Pergamum the site of Satan’s throne. Throughout the New Testament, we find rejections of the imperial ideology, which are as frank as was possible given the restrictions of Roman rule.

I also wonder whether the large and very hierarchical Hellenistic courts contributed to the emerging Jewish concepts of the ranks of angels serving and hymning God? As I will argue in a forthcoming post, it is from the third century that Jewish angelology becomes a much more florid and detailed subject.

The Hellenistic heritage created a world in which ideas could spread very rapidly, through the medium of Greek. But that heritage also included political elements that early Jews and Christians found abhorrent.

When Christians ultimately gained power in the Roman Empire, they emphasized Christ as the true king. And they did so by presenting him visually with all the trappings and titles that had once belonged to Hellenistic sovereigns.

For a couple of scholarly studies of these issues of the ideologies of power, see Samuel Rocca, Herod’s Judaea: A Mediterranean State in the Classical World (Mohr Siebeck, 2008); and Jonathan Marshall, Jesus, Patrons, and Benefactors: Roman Palestine and the Gospel of Luke (Mohr Siebeck, 2009).

October 7, 2014 Those Suspicious Medical Missionaries
Recent Comments
2 Comments | Leave a Comment
Browse Our Archives
get the latest updates from
Anxious Bench
and the Patheos
Evangelical
Channel
POPULAR AT PATHEOS Evangelical
1