“It’s great that these people are doing God’s work, but do they have to talk about Him so much?” So muses Brian Palmer at Slate about the work of medical missionaries like Dr. Kent Brantly, who contracted Ebola in Liberia. I’m almost embarrassed to write about this piece, because it is such an easy target. But the Brantly case has put new focus on the work of medical missionaries, who are generating surprisingly negative comments from certain observers. These critiques have fallen into several categories: those who say that the missionaries are stupid for putting themselves in harm’s way, those who say that the missionaries should get no special treatment when they contract a disease that has affected so many others in Africa, and those like Palmer who insist that medical missionaries are wrong to speak about their faith to patients. Here’s three observations about this debate:

1) Palmer and other critics have a deluded sense of “neutral” medicine. Doctors who deal with suffering and dying patients will inevitably send messages, explicit or implicit, to their patients and patients’ families, about the meaning of dying and death. Doctors who think that death is a purely natural event, and that there is no afterlife, or who are agnostic on such questions, will tend to communicate that sentiment to clients. This partly explains why so many Christian doctors do volunteer for the mission field – they believe that there is transcendent meaning in both life and death, and that every person has an eternal destiny. They are uniquely positioned to help people who are struggling with such questions. All doctors can and should be sensitive to issues of politeness and propriety, and the religious convictions (or lack thereof) of patients. But no doctor – no person – is “neutral” on topics like suffering, death, and the afterlife. 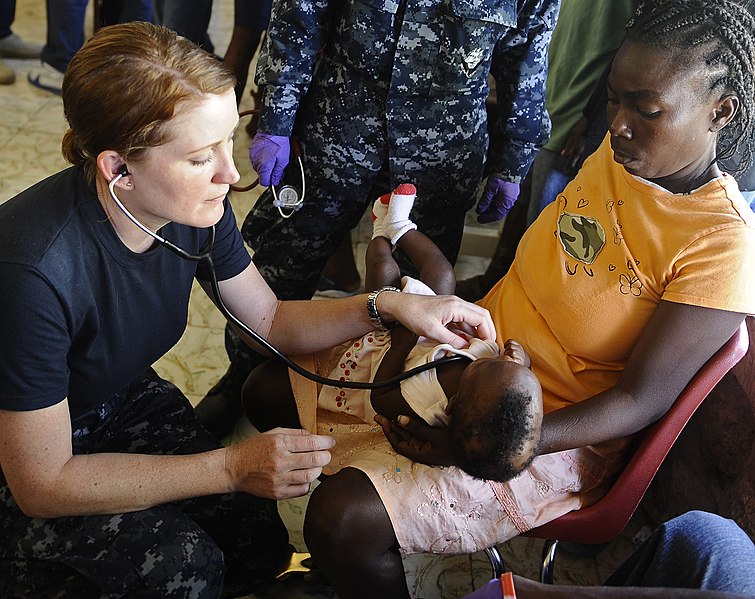 2) Making volunteer medical service contingent upon silence about one’s faith would be devastating to impoverished regions internationally. As Palmer himself notes, disproportionate numbers of doctors and nurses serving in under-serviced areas of the world (like Liberia) are people of faith. Devout Protestant and Catholic Christians are among the most common volunteers. They serve to honor God, and they do not believe that they can honor God fully if they do not speak about Jesus Christ to clients, when appropriate. Palmer seems unable to identify with the vast majority of people in the world who do not believe that death is the end of life, nor does he fathom that serious believers cannot be silent about their faith in their vocations.

Domestically and abroad, people of faith are far more likely to give time and money to charitable causes than are secular people. (Just this week another survey appeared demonstrating that the most charitable states are those with the highest rates of churchgoing.) You can accuse these believing folks of having ulterior motives, but where are the legions of atheist volunteers to take their place? Palmer’s innuendos about how the missionaries might be doing more medical harm than good are vicious and slanderous.

3) Christians must not object to other medical volunteers who speak of their own faith (or lack thereof) to clients. Of course, there are secular medical agencies such as Doctors without Borders (though presumably many of their individual volunteers are people of faith as well), Muslim medical missionaries, and those of other faiths. While Christians will not agree with the implicit or explicit messages these doctors may share with clients, the principles of religious liberty and charity would affirm that all medical “missionaries” are free to serve and speak (or not) in the name of their faith, and that their healing work does great worldly and humanitarian good. If we expect others to honor Christians’ right to freely witness about Christ, then workers of other traditions, or no faith at all, should have that freedom as well. Of course, this point may be moot: I don’t recall hearing of many Christians echoing the kinds of complaints made by secularists like Brian Palmer…

See also Ross Douthat’s take on the piece, in which he concludes that he thinks Palmer’s real complaint is “not that the missionaries are necessarily doing something wrong (he won’t actually come out and say that), but that they’re doing something right in a way that makes his team, Team Secularism, look somewhat less impressive by comparison. Which isn’t really a reaction that Christians should be offended by. It’s one that should be welcomed, worn as a badge of honor, and joyfully provoked.” Agreed.

October 8, 2014 Good Advice for those who are ABD
Recent Comments
22 Comments | Leave a Comment
Browse Our Archives
Related posts from Anxious Bench

Evangelical
"We’re Only Reached Out to in Times of...
Anxious Bench