Today’s guest post is by Nathan A. Finn, who serves as associate professor of historical theology and Baptist studies at Southeastern Baptist Theological Seminary, where he also directs the Center for Spiritual Formation and Evangelical Spirituality. You can follow him on Twitter​.

By most accounts, Billy Graham was the most influential American evangelical during the latter half of the twentieth century. Duke University Divinity School historian Grant Wacker has written an important new study of the evangelist titled America’s Pastor: Billy Graham and the Shaping of a Nation (Harvard University Press, 2014). This is not another biography of Graham; there are already plenty of those. Nor is this a technical monograph that hones in on a single aspect of Graham’s life; those abound as well. Instead, Wacker asks the question, “Why does Billy Graham matter?” He answers in a book that might best be described as a biographical study rather than a true biography. Wacker examines key themes in Graham’s life, using them as windows to shine light on the relationship between religion and American culture between 1945 and 2005.

In his introduction, Wacker suggests initial interpretations that are teased out in the main chapters. His thesis is that, “From first to last, Graham displayed an uncanny ability to adopt trends in the wider culture and then use them for his evangelistic and moral reforms” (p. 28). Wacker also lays out boundaries defining the scope of his work. He focuses upon Graham’s public career (the “Graham Voice”). He intends his study to be suggestive rather than exhaustive. He mostly limits his discussion to Graham’s ministry in the United States. Wacker admits he is making informed guesses, since he did not spend much time researching Graham’s correspondence (housed at Wheaton College and currently unavailable until 25 years after Graham’s death). He also chose to write for a broader audience rather than professional historians.

Wacker eight chapters each focus upon a different way to think about Graham’s identity and influence. In chapter one, Graham begins as a preacher who always understood his primary calling as that of an evangelist. He had a defined theological core, though it evolved some over time, and he used every means possible (but always preaching) to spread his message. Graham then becomes an icon in American culture who became so well-known in the 1950s and 1960s that he began to transcend his self-proclaimed identity as an evangelist. The Billy Graham Evangelistic Association (BGEA), journalists, and even his own good looks and family image contributed to his iconic status. Though he had detractors, his own gifts, basic integrity, and good fortune kept him from falling out of favor with the broader public.

Graham is presented as a southerner with mainstream appeal. Like Andy Griffith, he represented a wholesome South, and like the “First Church” culture of county seat southern towns, he represented a genteel, respectable South. Like all southerners, Graham had to grapple with the Civil Rights Movement. He moved away from his upbringing and desegregated his crusades before Brown v. Board of Education. Yet, he remained a racial moderate who frustrated activists, especially his sometime friend Martin Luther King Jr., who pressed Graham to take a more active role in promoting racial equality. Graham’s views on race received criticism from all quarters and continue to receive interest from scholars. In the fourth chapter, Graham becomes an entrepreneur who built a significant empire through the BGEA and other initiatives such as the more highbrow Christianity Today and the more popular Decision magazine.

In chapter five, Graham is the architect of the postwar evangelical coalition—what Wacker calls “mainstream evangelicalism.” He remained a Southern Baptist, giving him a denominational identity, but most of his energies were devoted to the non-denominational evangelicalism that coalesced around parachurch ministries like the BGEA. Nevertheless, Graham’s interactions with mainline Protestantism were mostly positive (excepting Reinhold Niebuhr), as were his interactions with Jews. The latter changed when his recorded conversations with Richard Nixon in 1972—which included harsh criticism of Jews—were released to the public in 2002. Next, Graham becomes the pilgrim who enjoyed close friendships with numerous presidents, though he (mostly) backed away from partisan politics after he defended Nixon during the Watergate scandal. This topic has also received considerable attention from historians. After the mid-1970s, Graham talked less about American exceptionalism and focused more on global peace and nuclear disarmament, much to the chagrin of more politically conservative evangelicals. 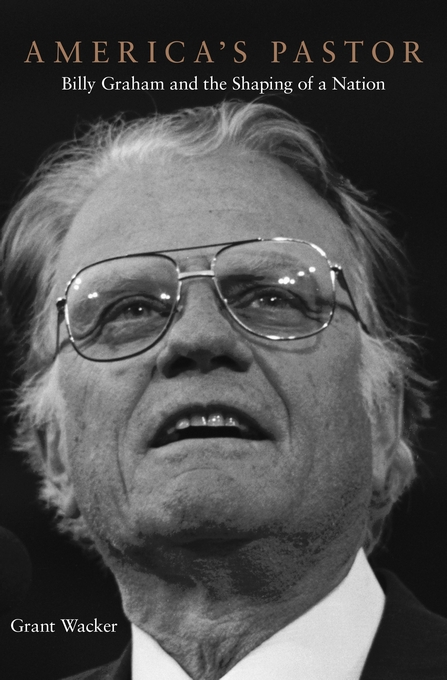 Graham is next portrayed as a pastor. Over the years, he moderated his early fundamentalism and became more moderate in his tone—and sometimes his theology. He always emphasized personal conversion in his crusades, though he worked closely with area churches (of all types) and tried to connect those who made decisions with local congregations where their faith could be nurtured. He appealed more to nominal Christians than outright unbelievers, though many of the latter respected him. Over the years, he received millions of letters from people of all ages; the Graham Voice (if not Graham himself) answered every one. Chapter eight looks at Graham life from the 1990s onward, when he took on the mantle of patriarch. Though he was criticized more than in the past (e.g. his remarks about Jews), and though fewer Americans knew who he was, Graham’s iconic status—as well as his integrity—still made him a powerful symbol in public life. In this chapter, Wacker also ties together a number of the themes previously raised as he concludes his formal study. A brief, more personal Epilogue closes out the book.

America’s Pastor is an important work that should be welcomed by scholars and popular readers alike. Historians will appreciate Wacker’s keen interpretive insights, command of the secondary literature, and his evenhanded balance between sympathy and criticism. Methodologically, Wacker provides a model for how historians can study important figures without resorting to narrow monographs or merely chronological biographies. More casual readers will appreciate a book with readable prose (no small feat for a professional historian) that depicts a Billy Graham who remains mostly recognizable to those already familiar with him and should prove interesting to many who are not.