Seth and the Alien God

The origins of Gnosticism are normally discussed in terms of debates within Christianity. However, one richly informative conflict occurred beyond the familiar realm of church history.

One of the great minds of Late Antiquity was the Egyptian-born philosopher Plotinus, the leading figure of Neoplatonism, and a younger contemporary of Origen. Around the year 263, in Rome, Plotinus engaged in a furious debate with some Gnostic thinkers. Although the two sides shared many assumptions and terminology, Plotinus condemned his enemies for what he saw as their gross misunderstanding of Platonic philosophy. Among other complaints, he warned that their radical elitism would lead them into misconduct and immorality. Effectively, he expelled these Gnostics from the mainstream philosophical world of the time, after a long period in which Platonists and Gnostics had coexisted and debated together.

That story is quite well known, but recent work has shed major light on just who these Gnostics were. I am referring to Dylan M. Burns’s excellent recent book Apocalypse of the Alien God: Platonism and the Exile of Sethian Gnosticism (University of Pennsylvania Press, 2014). This ambitious and wide-ranging work identifies Plotinus’s Gnostic foes as Sethians.

The best evidence comes from the philosopher Porphyry, whose Life of Plotinus records that “there were in his [Plotinus’s] time many others, Christians, in particular heretics who had set out from the ancient philosophy, men belonging to the schools of Adelphius and Aculinus . . . who produced revelations of Zoroaster and Zostrianos and Nicotheus and Allogenes and Messos.” Burns notes that these “revelations,” apokalypseis, sound very much like the “Apocalypses,” we know from the Nag Hammadi library,  including works we know as Zostrianos and Allogenes. 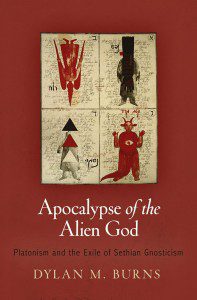 Sethians followed Seth, brother of Cain and Abel. Sethian writings now known include the Gospel of Judas, Apocalypse of Adam, Apocryphon of John, the Trimorphic Protennoia, the Coptic Gospel of the Egyptians, the Three Steles of Seth, and the Zostrianos and Allogenes already mentioned. As the book’s jacket description summarizes Burns’s view of Sethian literature, “Blending state-of-the-art Greek metaphysics and ecstatic Jewish mysticism, these texts describe techniques for entering celestial realms, participating in the angelic liturgy, confronting the transcendent God, and even becoming a divine being oneself. They also describe the revelation of an alien God to his elect, a race of ‘foreigners’ under the protection of the patriarch Seth, whose interventions will ultimately culminate in the end of the world.”

Sethian mythology described an Unknown God, who emanated a series of paired spiritual beings or Aeons, all of whom together constitute the Fullness, the Pleroma. Without approval, the Aeon Sophia (Wisdom) then imitates the highest God by emanating a lesser being, who proves to be the flawed Ialdabaoth. This is the Demiurge, the Creator of the material universe, who is identified with the God of the Old Testament. He is served by lesser Rulers or Archons. The story of Fall and ruin culminates with the creation of Adam and Eve. Because of their interest in the Serpent in Eden, some related movements are known as Ophites, followers of the Snake. (The system is also described by the Church Father Irenaeus in Adversus Haereses, 1.30). In some variants of the tradition, Jesus was an incarnation of Seth.

Far from being pagan, as some scholars once imagined, Sethians definitely belonged on the Jewish-Christian continuum. “This Sethian literature emerged along the fault lines between Judaism and Christianity, drew on traditions known to scholars from the Dead Sea Scrolls and Enochic texts, and ultimately catalyzed the rivalry of Platonism with Christianity.” Several such works were “deeply conversant with advanced Platonic metaphysics” (3) while others were more firmly rooted in a Judaeo-Christian tradition.

Burns neatly summarizes his argument in his Chapter Seven, “Between Judaism, Christianity and Neoplatonism” (pp 140-59), which tries to locate Sethian origins. Although he dismisses “the old red herring of pre-Christian Gnosticism,” Burns sees strong analogies between Sethian practices and beliefs and those of sectarian Judaism. These linkages are apparent in the Dead Sea Scrolls and the Hekhalot or “Palace” literature, accounts of ascents into heavenly palaces. (The Hekhalot literature has been characterized as “Jewish Gnosticism,” although its works are not easy to date). Meanwhile, the Dead Sea Scrolls often refer to angels, heaven and “knowledge,” ideas very familiar from later Gnosticism. Underlying both genres we find the legacy of Enoch, that pioneer voyager in the heavenly realms, whose books tell us so much about the various ranks of angels. Some scholars have also traced affinities between Enochic literature, especially 2 Enoch, and Sethian works like Zostrianos.

He also draws extensive analogies with  the Mesopotamian Christian and Gnostic material I have been discussing recently. I will describe these in my next post.

Among many acute observations, Burns draws one telling conclusion: “Despite the insistence of our modern sense of Judaism and Christianity, the ancient world birthed movements that do not fit scholars’ categories of these terms but rather fall between and beyond them, without necessarily belonging to contemporary Greco-Roman culture either.”

On a trivia point, I was amused to see Sethian mythology revived in the recent film of Noah, which distinguishes between the noble race of Seth and the evil descendants of Cain. Not that Noah was the single worst film of modern times. Not while we have Exodus.

December 16, 2014 Happy 300th Birthday George Whitefield!
Recent Comments
0 | Leave a Comment
"This was a great article...thank you!"
Edwin Fernandez Athens, Jerusalem and Nag Hammadi
"So explain why most historians are Marxists."
Roger McKinney The Annales Movement (Part Two) | ..."
"Appreciate the historical tracking of demographics, religious practices, and geographical implications. It's important to tease ..."
Daaj The Southernization of American Evangelicalism (and ..."
"The bullet points of your plea seem to reveal that some struggle with basic human ..."
Gary An Open Letter to Complementarian Women
Browse Our Archives
Related posts from Anxious Bench