The Limits of Free Speech?

In the wake of the recent near attacks on the satirical cartoon contest sponsored by the American Defense Freedom Initiative self-appointed pundits have begun to talk about the “limits of free speech,” asking questions such as: is some speech so provocative that it should be limited?  So have respectable news outlets.  McClatchy, a news source whose reporting I appreciate, recently posed the question this way: “If free speech is provocative, should there be limits?”  Today, Diane Rehm–one of the best interviewers in radio–will broadcast a show entitled, “An Attack Thwarted in Texas, Claims of Responsibility by ISIS, and The Limits of Free Speech.”

Although we all understand that even in free society there are limits on speech, in America, those limitations have generally been applied to specific public situations, e.g. “shouting fire in a crowded theater,” and not specific sorts of speech, e.g. anti-religious rhetoric.  Anti-religious rhetoric–be it in the form of Sam Harris‘ caustic New Atheism, Jack Chick’s anti-Catholic Tracts, or provocative cartoons of Muhammad–is the sort of annoying, insulting, and yes, even blasphemous speech that religious groups in American have come to accept as the price of living in a society that affords them free exercise.

After the ratification of The Bill of Rights, the legal protections enshrined in First Amendment shaped the development of religion (and religions) in the United States of America.  Unlike in the state-church societies of eighteenth-century Europe, in the newly formed republic religious groups had to compete for adherents in an emerging religious marketplace.  In this religious marketplace, which grew as the nation expanded westward and the New England states disestablished their state churches, groups used rhetoric and suasion to bolster their numbers.  At times, this rhetoric included virulent bombast and slanderous claims about other religious groups.  Although frustrating to those groups at whom it was directed, in principle (if not always in practice) the legal protection afforded such speech meant that the disparaged groups had a right to retaliate.  In short, I tolerated your bombastic blasphemy because you were compelled to tolerate mine.

In the nineteenth century, denominationalism became the shape of religion in America as the various groups learned to work together for specific causes while maintaining their distinctive beliefs.  Baptists and Methodist cooperated to publish gospel tracts even as they harangued each other over baptism.  In the frontier states, the denominations engaged in a war of words through sermons, speeches, and denominational papers.  Occasionally fistfights would break out, but rarely were one’s religious opponents killed.  By the late twentieth century, that model of mutual toleration, and at times, respect, expanded to included non-Christian groups as Asian immigration opened after 1965.  It remains to be seen whether or not such an arrangement can survive globalization and an America where security is beginning to trump freedom.  The near attack in Garland, and perhaps more importantly, the reactions of Americans to it, tests the limits of that arrangement of mutual toleration-mutual free speech.

Without a doubt, it is easy to defend the free speech of groups one finds tolerable. It is much more difficult–but also much more necessary–to defend the free speech of groups that one finds despicable.  And yet liberty depends on just that, for freedom erodes from the margins towards the center.  Thus, we must defend anti-religious rhetoric as free speech, even when it is provocative because our freedoms depend upon it.  The oft-cited quote mistakenly credited to Voltaire applies: “I disapprove of what you say, but I will defend to the death your right to say it.”  Without a doubt, evangelicals ought to denounce the ADFI and its provocative tactics as unworthy of the name of Christ, even as we defend the American principle of free speech.  Once one form of speech is labelled as “too provocative,” any form can become a target for that label, a situation that bodes well for no one, whether Muslim, Christian, or anti-religious rhetorician.  On this, it seems, a whole host of Americans ought to agree.

May 5, 2015
"Theological Police"? Paleo Evangelicals and Ben Carson
Next Post 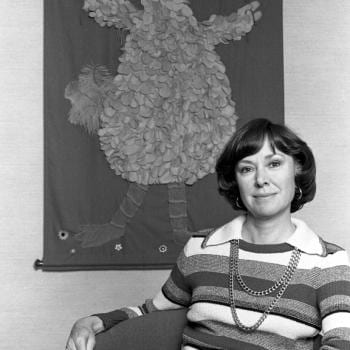 Evangelical
P is for Pluralism: Sesame Street and Its...
Anxious Bench

C.S. Lewis and A.E. Taylor: Literature, Philosophy, Plato,...
“The story will save us. . .”so Plato ends Republic written when his...
view all Evangelical blogs
What Are Your Thoughts?leave a comment
Copyright 2008-2020, Patheos. All rights reserved.