I have been writing about the nature of academic debate, and how scholars assess claims. In some cases, it’s not too difficult to dismiss arguments as bogus or pseudo-scholarship, but often we find controversial views that are removed from the general consensus, and yet they demand to be discussed and debated. Sometimes, ideas that initially seem radical or counter-intuitive will gradually become part of a new consensus, a new orthodoxy. Others don’t. What makes the difference?

Plenty of examples of such “heretical” works come to mind. I remember in the 1970s reading the book Redating the New Testament by Bishop John Robinson, who argued that virtually all the New Testament writings were completed before the year 70 AD, far earlier than the academic consensus would accept. Most Bible scholars would still reject his arguments, but the way he posed them forced even the best-accredited experts to re-examine their assumptions, to justify why they believed what they did. In this case, a heretical work failed to become orthodoxy, but it did some really valuable services along the way.

One of the illustrations I have been using in recent columns is the whole question of early human settlement in the Americas, and that area is currently the subject of intense debate. Again to illustrate how scholars argue, let me cite one ongoing battle.

As I remarked, the standard view of early human occupation assumed that big game hunters entered the New World from Siberia and eastern Asia around 13,000 years ago, and you can recognize them by their Clovis culture tools. More recent work has pushed that movement back by several thousand years, but still assumes that the newcomers came from East Asia, perhaps sailing along the coasts rather than tramping across the land-bridge.

Over the past quarter century, though, a heretical alternative view has arisen, which suggests that at least some of the first early humans came from Western Europe – from Iberia rather than Siberia. However odd this sounds, you can actually make a surprisingly good case for this view. Very early Americans used a stone technology reminiscent of the Solutrean cultures of Western Europe. Also, you can now find an impressive roster of really ancient pre-Clovis archaeological sites in the Eastern US, rather than the West, and some of the very oldest are on or near Chesapeake Bay. One of the truly amazing finds is the so-called Cinmar site, some miles off Virginia’s present day coastline, where a fishing boat dredged up an archaic stone blade in the company of mastodon bones. If true (and that find has been subject to a major recent assault) that would place human beings on the east coast 22,000 years ago. That’s a very long way from the Bering Strait and Siberia.

This all meshes well with the theory that Clovis cultures emerge from some earlier phenomenon in the east, probably the mid-Atlantic region, and then diffuse west. Getting into really controversial territory, the earliest human remains in North America look nothing like Native Americans in skull or facial type, suggesting the presence of other ethnic groups.

It’s a complicated story, but the Solutrean hypothesis is well laid out in a book called Across Atlantic Ice by Dennis J. Stanford and Bruce A. Bradley. They argue for the existence for ice-based cultures that could coast very long distances, even to the point of crossing the frozen North Atlantic. The arguments from other parts of the world about Paleolithic access to boats seem convincing. To over-simplify, they suggest a model like this: In the beginning were the Solutreans; the Solutreans begat pre-Clovis, which begat Clovis. 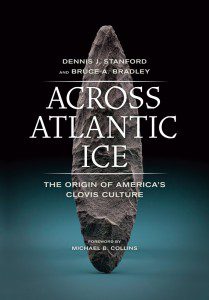 So here we have a standard consensus view, and an insurgent alternative. How is anyone to tell which is more accurate? The first thing is to look at who the “insurgents” are and how they make their case. Dennis Stanford himself is very much an insider. A fine scholar, he is a Curator at the Smithsonian’s Museum of Natural History, and anything but a flake. (You may recognize that that word as a dreadful pun in the world of ancient stone tools). Across Atlantic Ice appears from a very prestigious press, the University of California’s. Moreover, that is by no means the only work on the subject. The Solutrean view is supported by many scholarly articles and papers by various authors, and published in well-established academic outlets.

The Solutrean case is a minority view, but nevertheless, it is a real scholarly argument, one that other archaeologists representing the mainstream consensus have had to fight vigorously against. See for instance the fierce and mocking rebuttal in David Meltzer’s First Peoples in a New World, also from the University of California Press. That condemnation is itself important, because it shows that mainstream scholars acknowledge the existence of a serious rival view, which they do not, for instance, in dealing with Mormon claims.

On a personal note, the Solutrean case is one I sympathize with, and in many ways find convincing. That makes me sad to report that recent developments have not been kind to the argument. In the past couple of years, genetic evidence has definitively linked Native Americans to East Asian populations. Much more important, some of those Asian-derived peoples had facial characteristics like those of the mysterious human remains mentioned earlier. If they did not look like classic Native Americans when they arrived, they developed those characteristics over the centuries by means of evolution, and interbreeding with later arrivals. We no longer need to postulate non-Asian migrants to explain those early bones.

Just as telling a counter-argument, if Europeans were in fact flooding into the eastern United States, we have to ask what happened to their genetic inheritance, which is simply not found anywhere in the New World. That does not of itself rule out the chance that some Solutreans might have reached the Chesapeake, but even if they did, they did not leave much of a footprint in the Americas.

If the Solutrean thesis is not dead, it is not doing well, and it has by no means become a new orthodoxy. For the current state of arguments, see a book of conference proceedings like Kelly E. Graf, Caroline V. Ketron, and Michael R. Waters, eds., Paleoamerican Odyssey (College Station: Texas A&M University Press, 2014). 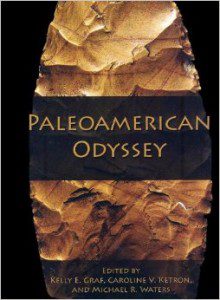 What we are seeing here, then, is a classic scholarly debate. People point to evidence that apparently does not fit the existing consensus. They then develop a new hypothesis that, in their view, better fits that evidence. All this, moreover, takes place within the approved channels of scholarly debate, in peer-reviewed journals, in papers at major professional conferences, and in books from prestigious presses (which are also subject to peer review).

Both sides work within known and approved methodologies. Both sides then debate the case, pointing to weaknesses and inconsistencies in their opponents’ arguments, and refining their own beliefs. Both sides return to the specific evidence cited to see if it is as solid and impregnable as it originally appeared. As in any scientific endeavor, skeptical testing is the rule of the day. Books are reviewed, articles are subject to rebuttal, scholarly papers provoke arguments. As new evidence emerges, each side tries to incorporate it into their own case. Ultimately, chiefly based on that evidence, either the insurgent view establishes a foothold in mainstream opinion, or it does not.

Equally, look at what did not happen in this instance. An activist did not present his or her innovative views in the form of self-published books, of youtube clips, or rants on a blog. That person did not present a case in terms of claiming to overcome a sinister consensus supposedly pledged to suppress the truth. S/he did not cite controversial evidence dredged up from sources that were doubtful, outdated, discredited or spurious. His or her main argument was not founded on the principle of “This is something I would really like to believe.”

That is what separates real scholarship from its disreputable distant cousins.

June 8, 2015 Road Trip, with Manasseh Cutler
Recent Comments
19 Comments | Leave a Comment
"I believe that the impressive growth of Christianity in Sub-Saharan Africa is an indirect result ..."
Tony Of Empires, Faiths, and Unintended Consequences
"Intriguing. I didn't know that Walter Rauschenbusch was a prohibitionist! Odd, since his book,Christianity and ..."
Daniel Wilcox “Everything You Know about Prohibition Is ..."
"My mother was a Baptist preacher's daughter, born in 1935. She used to "play church," ..."
Jon Altman What I Learned from Designing Women ..."
""Bernice reminds Reverend Nunn that for every time Paul seems to silence women, Paul elsewhere ..."
Rick What I Learned from Designing Women ..."
Browse Our Archives
get the latest updates from
Anxious Bench
and the Patheos
Evangelical
Channel
POPULAR AT PATHEOS Evangelical
1