UPDATE: The topic of this post has taken on added urgency in light of the San Bernardino shootings of Dec. 2. It is ever more important to be vigilant, and to protect religious liberty.

I have made my views of Donald Trump well known – he’s dangerous and inane, and normally does not stick to any one position for long, except perhaps for xenophobia. Since the Paris terrorist attacks, he has been making ominous statements about how we’re going to have to “do things that we never did before” with regard to cracking down on Muslims. Although he has vacillated wildly on what he means, his affirmations have included making Muslims carry special religious IDs, maintaining a database of all Muslims living in the  U.S., closing mosques, and putting mosques under surveillance.

I realize that I am nearly incapable of agreeing with anything Trump says, but I do absolutely agree that we should be putting some mosques, imams, and Muslims under surveillance. In and of itself, this is a reasonable position that could garner support across the political spectrum. The difference is, what precipitates that surveillance? The mere fact that it is a mosque?

No. We must draw a line between Muslims being targeted because they are Muslims, and Muslims being targeted on the basis of reasonable evidence that they are promoting violence and/or jihadist conspiracies. The same standard would apply to people and congregations of all faiths. We would never accept monitoring Christians, Jews, or other religious groups because they are of that religion, and neither should we do that to Muslims.

Muslims do have a particular burden to carry because so many Muslims are engaged in jihadism and terrorism. But most Muslims around the world, and in the U.S., are not violent jihadists. Singling out America’s three million Muslims for surveillance, tracking, or identification requirements would damage the prized assimilation of Muslims into our culture, the very thing that France and other European countries have struggled with so much. Special scrutiny based simply on religion would foster the sense that, whatever their actual behavior, Muslims cannot be trusted. It would signal that the government presumes they are guilty because they are Muslims.

I defer to others who better understand the legal technicalities of when surveillance properly kicks in, but common sense would suggest that when an imam is preaching violence, his mosque should get attention from authorities. We should monitor public conversations on Twitter, YouTube, and other venues for jihadist content.

We should cultivate informants and spies who infiltrate known jihadist networks in America. We should monitor the movements of people traveling overseas into centers of jihadist activity. Any time plausible suspicion connects people residing in the U.S. to evidence of jihadist or terrorist advocacy, surveillance should follow.

But no, Donald Trump. No surveillance, tracking, or special identification of people simply because of their religion.

—See also “The Case for Mosque Surveillance,” by Philip Jenkins, a draft of which helped me to write this post. 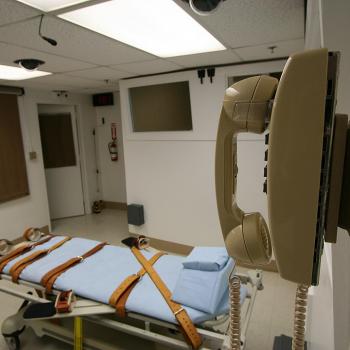