In today’s post I am talking with fellow Anxious Bench blogger, Baylor University historian, and prolific author Thomas Kidd about his new book, American Colonial History: Clashing Cultures and Faiths. His previous books include biographies of George Whitefield and Patrick Henry and a history of the Great Awakening. 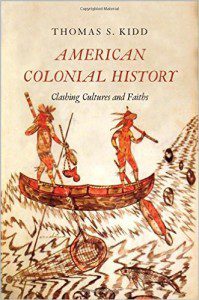 JT: You write that two major themes organize American Colonial History: religion and conflict. What’s new about the way that you approach these two themes?

TK: Too many historical overviews throw every conceivable topic at you in one big jumble, and it makes for dull reading. I decided that while I am seeking broad coverage of the key people and events of American colonial history, I wanted to focus on these two aspects that explain so much of what happened in the meetings of Native Americans, Europeans, and Africans. Violence was everywhere in these years, and people often understood that conflict in religious categories (Catholic versus Protestant, Christian versus “pagan,” and more).

But religion also inspired courage for people to seek out new homes to practice faith in freedom, and to suffer with dignity under awful conditions. Faith also undergirded many of the crusades to respect people’s basic human rights. The story of faith’s role here is not one-directional.

JT: You spend much of your first chapter introducing readers to the world of native peoples at the time of contact with Europeans. In particular, you flesh out native religious beliefs and practices. The Spanish, French, and English bequeathed us a rich body of sources. How can historians compensate for a relative lack of sources when it comes to recreating the experiences and perspectives of the native actors in this story?

TK: We’re often pressed to use the tactics of anthropologists, archaeologists, and folklorists to get at the beliefs of Native Americans and Africans. They do leave records, but sometimes they are architectural or artistic. For example, how do we interpret the incredible mounds and earthen pyramids left by Indians up and down the Mississippi River Valley? My favorite example, partly because my family has visited it, is the Poverty Point site in northeastern Louisiana. There, sometime around 1400 B.C., Indians built a series of mounds including the “bird mound,” which is seventy-two feet high and probably required some 27 million large baskets of dirt to construct. They erected this in about nine months! What did the bird mound mean to those who built it? We don’t know for sure, but there seems little question that it had ritualistic and religious significance.

JT: As you note, the enslavement of Africans (and sometimes Indians) was not confined to the southern colonies, but an integral part of many northern economies as well. And slavery was brutal. I learned from your book that a South Carolina law required slave owners to castrate male slaves who ran away for the second time and that a Baptist congregation in the colony defended the practice. At the same time, some Europeans denounced slavery and the barbarisms endemic to it. How rare were white Christian objections to slavery during these centuries?

TK: Until the era of the American Revolution, the objections were pretty rare. Often people of British or European background would argue that Christians could own slaves because the Bible seemed to sanction it. Most thoughtful observers would at least note the moral problems in the slave trade, with its massive system of captivity and transport that seemed to violate I Timothy’s injunction against “manstealing.” Some early Quakers took the lead in criticizing the slave trade and the way that masters abused their slaves, and some evangelicals in the era of the Great Awakening did so too. But it was not really until the 1770s that you saw the flowering of the first great wave of anti-slavery advocacy, led by white and black evangelical Christians and others.

JT: Many American evangelicals are accustomed to admiring the Puritan settlers of New England, who remain paragons of faith for a good many Christians today. At the same time, as you note, they not only behaved cruelly toward both natives and European dissenters but helped set in motion a chain of events that devastated the lives and cultures of America’s native peoples. Are the Puritans primarily saints or sinners?

TK: Like the rest of the people in my book, the Puritans were people of their time. That’s where we have to start. The Puritans were unquestionably driven by religious principle to protest against the Church of England, and they came to New England to set up a Bible-based church and state. Unfortunately, within several years of settling Massachusetts, they had also engaged in vicious wars with local Indians (especially the Pequots, whom they virtually eliminated), and began persecuting dissenters, most notably Anne Hutchinson and Roger Williams. The soaring, comprehensive vision of John Winthrop’s “city on a hill” gave the Puritans little latitude for tolerating those who did not cooperate with the New England experiment, or who had different theological convictions.

JT: Your book ends with the events that led up to the American Declaration of Independence in 1776. As you note, the Declaration and ensuing conflict had no immediate impact on the various European and native peoples living around places like St. Louis and San Francisco. How does one write a history of colonial America without having the American Revolution loom large over the centuries that preceded it?

TK: Alan Taylor’s respected survey American Colonies ended its account, provocatively, with virtually no mention of the American Revolution, instead concluding with the colonization of places like British Columbia, Hawaii and California. I get the point: it is incorrect to view American colonial history as inexorably setting the stage for the Declaration of Independence. Early America was far too complex to simplify its history that way. As you note, the Revolution looked a whole lot different from the perspective of French St. Louis, or Spanish San Francisco, which coincidentally was founded in 1776. Yet those places were as fully part of American history as was Philadelphia.

On the other hand, from the perspective of American civic education, the connection between colonial history and the Revolution matters. It is important to show how key events in the colonial era, including the outcome of the Seven Years’ War in 1763, and the massive British national debt incurred in that war, directly impacted the crisis over taxes in the colonies, and helped to precipitate the Revolution. I don’t think we are taking an improperly nationalistic view of history to tell that traditional story, but it is important to add those other continental perspectives, too. In St. Louis and San Francisco, the Revolution hardly registered at all in 1776. But the people there would feel its impact in due course.