Nearly twenty years ago, I visited a psychiatric unit near the city of Cebu in the Philippines. It consisted of two small sex-segregated wings, each holding perhaps two dozen patients.

For my young adult eyes, it was a house of horrors. I had seen slums. I had seen young children scavenging at a filthy dump. I had seen an overcrowded hospital. But nothing I had seen prepared me for the vacant stares, the strange ejaculations of speech, the sense of hopelessness.

What I saw, however, was an improvement over what the Unitarian reformer Dorothea Dix witnessed in Massachusetts in the early 1840s: “insane persons confined within this Commonwealth, in cages, closets, cellars, stalls, pens! Chained, naked, beaten with rods, and lashed into obedience.” 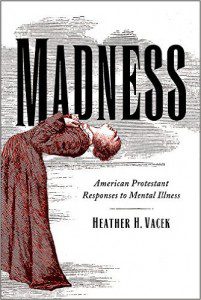 One reason Vacek’s case studies work so well is because most of her subjects lived with mental illness, either in themselves or through the presence of loved ones. Mather’s third wife, Lydia Lee George Mather, suffered from “raging madness,” which sometimes precipitated violence toward him. Rush’s son John spent twenty-seven years in a “cell” after falling into “melancholy brought on by killing a brother [naval] officer” in a duel. Dix suffered from depression and thoughts of suicide, and Boisen endured repeated breakdowns related to “unrequited romantic infatuations.” All of her subjects, moreover, whether ordained clergy or not, intimately knew the havoc mental illness wreaked in their congregations and communities.

Vacek traces several questions and themes in the course of Madness. What caused mental illness? Was it the result of sin, demons, disease, or circumstances? How should clergy respond, and was their response primary or secondary to that of physicians? Cotton Mather was probably had more scientific and medical knowledge than any other individual in early seventeenth-century Boston, but by Rush’s lifetime, the Enlightenment and inchoate professionalization of medicine had begun to circumscribe the minister’s role in treating mental illness.

“Every man is Mad in some One Point,” Mather pronounced. “There is at least One Point, wherein Reason will do nothing with him.” Mather pronounced the “Whole World” “an Entire Mad-house.” Illness was a result of both sin and God’s will. Surprisingly, though, Vacek comments that there was relatively little stigma attached to mental distress in Mather’s New England. “American residents generally tolerated insane citizens,” she writes, “assuming madness could strike those of any social class or profession.” Families and communities cared for the afflicted.

By the late nineteenth century, the afflicted were much more likely to be confined in asylums. In part because of that removal from their families and communities, stigma surrounding mental illness grew. As Vacek observes, mental illness remains a widespread but often shrouded malady in American congregations. On Sunday mornings, congregants shared their joys and concerns, but those concerns are often confined to physical illnesses. Although mainline ministers typically receive Clinical Pastoral Education, congregations as a whole make it difficult for those in their midst to feel safe enough to seek healing. Through practices of hospitality and companionship, Vacek calls on “believers to respond in creative ways to overcome stigma and fear and become more faithful participants in the kingdom of God.”

Madness, thus, is part history and part theology. In terms of the history, her story is slanted toward Presbyterianism and what became liberal or mainline Protestantism. As she notes, and as Ann Taves has discussed so well in Fits, Trances, and Visions, her subjects often understood revivalism and religious “enthusiasm” as possible causes of mental illness. Moreover, while Vacek notes that the association of mental illness with sin and demonic punishment “diminished as the centuries progressed,” such associations remained very common in some Protestant contexts.

In terms of theology, though, Vacek’s observations — especially in her introduction and conclusion — should be required reading for, well, all Americans. More than 40,000 Americans kill themselves each year. Millions suffer from serious mental illnesses. These issues touch all congregations and most extended families. In the face of not knowing what to do, most of us have chosen to do very little.

March 9, 2016
The Christian History of "Pagan" Easter
Next Post

March 11, 2016 Volcanic Faith
Recent Comments
3 Comments | Leave a Comment
Browse Our Archives
get the latest from
Anxious Bench
Sign up for our newsletter
POPULAR AT PATHEOS Evangelical
1

Evangelical
When to Give Thanks
Anxious Bench
TRENDING AT PATHEOS Evangelical