Bringing Back the Dark Ages

I am about to say something really contentious and controversial: Dark Ages happen, and I believe in them. And I actually have some new evidence to support that shocking conclusion.

Oddly, this seemingly abstruse topic is in the news right now. The agency English Heritage just published a timeline showing the era 410-1066 as the Dark Ages in Britain, which generated a controversy among historians. Both sides agreed that the long time span was ridiculous, but they differed on whether the term could be applied at all.

Let me explain the issues here. In bygone decades, historians used to look at certain eras and apply that Dark Age title to them. The classic example was Europe after the fall of the Roman Empire in the West, and especially the years between, say, 450 and 750. Familiar evidence of settlement and building all but vanished from the archaeological record: cities and villas faded into disuse. Also, written historical sources dried up, suggesting that literacy shrunk. An organized “civilized” society had collapsed, to be replaced by a barbaric order. The classic stereotype is of a roofless, ruined, Roman villa, with some filthy peasants building a fire to stay warm amidst the fading Classical mosaics. And that was a Dark Age. 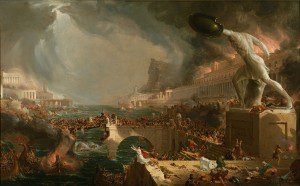 Similar patterns emerged in other eras, especially the three centuries or so following the collapse of the great Bronze Age empires of the Near East, around 1150 BC. Look for instance at a classic interpretation like Anthony M. Snodgrass’s The Dark Age of Greece (1971).

Those “Dark Age” societies were very important for the history of religion, not least because they tended to be highly productive of religious developments, but also because religions often provided the vehicles that kept older ideas live. Medieval Europe, for instance, was a sea of darkness enlightened only by the monasteries. The post-Bronze Age Near East was the setting for the emergence of ancient Israel.

Move the film forward, though, and Dark Ages became very unfashionable indeed. In more modern interpretations, there were multiple reasons to avoid the term, and to some extent they reflected new political perceptions, chiefly of a left/progressive nature.

First, to speak of the collapse of civilization suggested a judgmental approach that was elitist and even pro-imperialist. Yes, perhaps imperial authority had withdrawn, but the life of ordinary people carried on much as before. Village life endured, and was even vastly improved by the absence of centralized states and tax collectors. The decline of written sources and literacy might have affected elites, but these were always a remote upper crust. Maybe the cities are no longer reading Virgil, but those egalitarian local communities are composing their own vernacular treasures. So why was that a decline or a deterioration?

Below the level of those vanished elites, there was a thriving world of villages and small towns, trade and crafts, so which Dark Age are you talking about? Who gave you the right to say that an era with a strong state – and a strong colonial/imperial order at that – was somehow superior to what followed? These ancient “civilizations” were absolutely based on slavery. So villas disappeared, so what? Isn’t that like bemoaning the collapse of modern-day gated communities and BMW dealerships?

Seeing things from the bottom up, (in that view), Dark Ages for the rich might actually be golden ages for the poor.

Reinforcing that approach, much recent archaeology has claimed – with varying degrees of plausibility – to stress continuity from older Roman orders in Europe, and even Britain. (I have posted about this issue multiple times in the past. See here, for instance). I am wryly amused to see the amount of intellectual effort that goes into denying or underplaying evidence of barbarian invasions and occupations in those eras, and ignoring the clear evidence of the servitude and suffering imposed on older native peoples.

In consequence, if you are writing European medieval history and you use the term “Dark Age,” you had better be using it ironically, or you will attract derision. Depending on the setting, the approved terms are now Early Medieval, or Late Antiquity. So always put “Dark Ages” in quotes, and you will be fine.

Here is where I disagree, fundamentally.

When the Dark Age notion was originally coined, by Petrarch in the 1330s, he used it to cover the whole Middle Ages, basically from the end of the Western Empire in 476 right up to close to his own day. That is far too expansive, in terms of both time and space. But the phrase is useful if properly defined, and limited to those grim years between roughly 450 and 750.

As I read the evidence, “Dark Age” societies like those of post-Roman Britain actually were dark in the sense of severely shrunken and impoverished. Decline was a complex process. Populations declined very steeply indeed, in a way that suggests severe contractions in agriculture, in the area of occupied land, and especially the volume of trade. Towns and trading centers imploded, leaving people confined to a grim subsistence economy. No coins were minted in Britain between around 400 and 650, suggesting the severe shortage of trade. The lack of state mechanisms put the burden of defense and law enforcement on militarized local communities, creating a barbarian order where the life of man was indeed nasty, brutish and short. We are looking at far-reaching societal collapse. In more senses than one, a Dark Age society is a shrunken world.

What we today call infrastructure is one aspect of all this. High civilizations produce roads, bridges, irrigation systems, ports, docks, lighthouses, and so on, all of which depend on strong central authority, and that promotes trade, communication and commerce. When they stop building and doing engineering projects, that means that communications decline accordingly. The less communication and commerce, the less need for that infrastructure. As the film almost says, don’t build it and they won’t come.

The military aspects of this also demand attention. Ancient empires had very large and sophisticated armies and navies, with all that meant for fortifications and siege-works, and those were a major driving force in technological change. When the great armed forces evaporated, so did the impetus for new developments in science and engineering, not to mention mathematics. And also medicine.

Watch the film Monty Python’s Life of Brian, and especially the wonderful sequence where someone asks, “What have the Romans ever done for us?” Listen to everything mentioned in that exchange, and then imagine all those blessings removed from the picture within a few decades. That is the difference between civilization and a dark age. 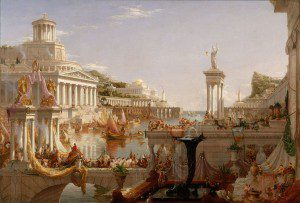 In the harsher new era, war and violence were constant, without central authority and armies to maintain order. That pervasive violence further disrupted what trade and commerce there were, and contributed to famine, malnourishment, and epidemic diseases. As I have written elsewhere, “Pirates and privateers plunder sea travel, armies and bandits steal merchants’ goods on land. Labor shortages and disruptions of trade wreck the economy, and often bring hunger to communities that always existed on the verge of subsistence. Weakened societies are vulnerable to plagues and epidemics, which are spread still more widely by wandering armies.”

Very much the same observations can be made of the Near Eastern world in the post-Bronze Age era.

I say nothing here about the causation of such Dark Age eras, but climate certainly can play a role, in the sense of  global warming/cooling, and sudden catastrophic events like volcanoes. Possibly related to that, major epidemics like those of the 530s can be cataclysmic in their effects. So can prolonged drought. In this context, I wish I could speak with more confidence about the Classic Maya Collapse of the ninth century AD, but that initially seems to fit the Dark Age model very well.

Let me take another controversial classification. Nineteenth century anthropologists divided human societies into three stages, savagery, barbarism and civilization, so that Man (usually man, not humanity!) rose to civilization. Such a division is now mocked, rightly in most respects. But to make an unpopular statement, civilization is indeed highly superior to barbarism, and in many different respects. Life is more peaceful and richer across the board, and for ordinary people as well as elites. People can trade and travel further afield in relative safety. They can explore and colonize new lands. They can build up possessions, and flourishing markets allow the growth of a complex society with craftsmen, merchants and what we might call transport professionals – people who run the wagons, carts and ships. There is even foreign trade, and not just in the sense of a few loads of amphorae for the chieftain on the hill. All those transactions demand writing, to keep records and accounts, and that meant schools, scribes, and schoolteachers. Division of labor is after all one of the key signs of civilization.

“Civilization” is thus defined by thriving trade and trade routes, successful cities and towns, marked by literacy and schools. It also implies high populations and intense population densities, with the expanding settlement and land exploitation needed to cope with it. The horizons of such a society are significantly larger, with contacts far afield, across the country in question, and overseas.

Technology in such societies is vastly higher and more sophisticated than in its “dark” successors. People don’t just stop building great stone public works (for instance) because of a change in fashion, they have just lost the ability to do so. Life in Dark Age Europe largely depended on exploiting and reusing those old infrastructure developments that were now so far beyond current technological skills. Societies spent a millennium traveling along the old Roman roads and bridges, and stripping down the temples and palaces for their masonry. To appreciate the technological gulf, look at the Anglo-Saxon poem The Ruin, where a traveler passes the Roman ruins of a city, probably Bath, and can only assume that such great works must have been built by long-gone giants. 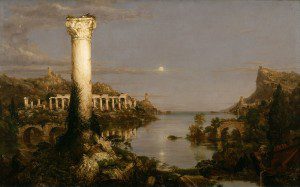 When you have a society that has been making great use of writing, and it suddenly stops doing so, that does not just mean that fewer sources exist for archaeologists and historians. It means that something very bad, and probably catastrophic, has happened to that society. The lack of written records and literacy really is a sign of collapse and decline, as is the (closely related) vanishing of towns.

You should also check out the provocative Wikipedia site on structural collapse, which describes several critical trends and characteristics: destratification, despecialization, decentralization, destructuralization, and depopulation.

In other words, there are plenty of objective measures by which we can measure Dark Ages. Unfortunately, and here is the irony, the relative lack of evidence from those eras means that quantitative comparisons are that much harder to undertake. Absences and negatives are, of their nature, hard to prove.

So, let me offer my own definition. We can look at an era and say that it is marked by systematic societal collapse and cultural impoverishment, reflected in collapsing population levels, and acute declines in urbanization, technology, literacy, productivity, and communications. Or, for simplicity, we can use the D word.

Hence, with all due caveats, I believe that the term Dark Age can and should properly be used. In my next post, I will look at some new insights into the term, and the processes it describes.

My illustrations, by the way, are taken from Thomas Cole’s amazing Course of Empire series, from the 1830s.