How a Dissertation Becomes a Book

How a Dissertation Becomes a Book August 18, 2016 johnturner

The first book of most academic historians is a strange creature: a dissertation that has become a book.

How and when should newly minted Ph.D.’s transform those dissertations into books? It is one of the most important and — often — most perplexing moments in an academic career. This is the first in a series of posts on the subject, beginning with how to get the process started.

My first response was to congratulate him. My second response was to panic! Should I also have a contract for my dissertation? Was my career over before it had begun? His good planning and good fortune were rare, as it turns out.

Most academic historians do not turn to this task until they have at least defended their dissertations. Those who effortlessly obtain tenure-track or otherwise tenable positions while A.B.D. might take their time revising those dissertations before contacting editors. In other instances, it may be worthwhile for scholars to take some time to revisit their dissertations before shopping them to acquisition editors. On balance, though, I think at least making contacts and exploring publication possibilities at an early stage is to one’s advantage. The entire process of academic publishing can take a long time, after all. If one anticipates future years on the job market, it can be very useful to have an advance contract to tout.

Book proposals in the field of history often include the following elements: an overview or abstract; a discussion of the marketplace for the proposed book (including a discussion of competing or similar titles); a discussion of sources; a chapter outline; an estimated word count, as well as requests for illustrations, maps, etc.; a timeline for completion.

In many instances, an editor might be reassured by an author stating that she intends to reduce scholarly jargon and explanatory footnotes in an attempt to gain the widest possible audience for the book.

The simplest way to get started on a book proposal is to ask several colleagues who have successfully placed their books with academic presses to share their proposals and use them for ideas and inspiration.

Be sure to make a strong case for your book at the outset of the proposal.

Historians in general and historians of religion in particular also have something of an advantage in the world of academic book publishing. There is at least a fighting chance semi-ordinary people may be interested in the books we write.

At the same time, connecting a manuscript with the right editor is no simple process. Just witness the hubbub surrounding the book exhibits at the AHA and OAH, where many advanced graduate students and early-career historians are making contact with editors. Especially at the most respected presses, those editors are rather deluged with proposals and manuscripts.

In the best-case scenario, one would have won several prominent awards, written op-eds for the New York Times, booked an appearance on the Daily Show, and secured a high-profile NYC agent to shop one’s first book manuscript.

In most cases, historians will be on their own. So, how does a first-time author get an editor to take a look at a proposal?

My best advice is to make personal contact with editors at conferences. Instead of firing off emails to people who have never heard of you, introduce yourself in person to prospective editors. If an editor is interested, be prepared to hand over a proposal or c.v. on the spot. More likely, an editor will request that you send those materials by email or regular mail after the conference ends.

Also, while making acquaintances in person or via email, it’s a good idea to find a colleague/friend who has published at a given press and use that individual as a reference. Perhaps that individual will put it a good word for you.

I absolutely hated introducing myself to prospective editors at the above-mentioned OAH conference. Even as I tried to explain the significance of my dissertation subject, my confidence cratered as I realized that most editors would have no idea what a parachurch organization is, let alone why anyone would write a history of one such organization. Of course, the worst thing an editor is likely to say is that the subject is not a good fit for that particular press.

Regardless of what one feels on the inside, one is likely to get useful advice, possible leads, and — hopefully  — a possible landing spot for one’s first book. 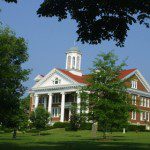 August 17, 2016
Notes to First-Year Students on Mystery and the Liberal Arts
Next Post

August 19, 2016 Britain’s Pagan Twilight
Recent Comments
0 | Leave a Comment
Browse Our Archives
get the latest from
Anxious Bench
Sign up for our newsletter
POPULAR AT PATHEOS Evangelical
1