Its history lies just as deep in the medieval past. The thirteenth-century cathedral of St. Canice stands next to a 9th-century monastic tower; a castle still sits on the site of William Marshall’s 12th-century Norman foundations; and a fourteenth-century inn, Kyteler’s Inn, still operates in the old town. 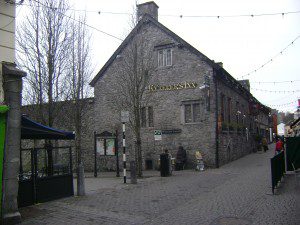 The inn is more than a reminder of the medieval past, however. It stands sentinel to an infamous medieval event: the first witch burning in Europe.

“We were all dragged in chains to watch the execution. The Bishop be in his big chair, in his furs, with his cowl covering his eyes again. I think he be sweating, because the lower part of his face be wet. He be so drunk they had to help him into his seat. They carried her out, too, but when they bound her to the stake, she be so limp they had to lash her tight with ropes, to hold her upright. I thought–I hoped–mayhap she be already dead. …

But then, as the smoke swirled closer to her body and the rags of her skirt caught fire, she opened her eyes again. She looked straight in front of her. I canna ever forget it. That small face … it be hugely swollen now, a purple, scarred, bloated pulp between those blood-caked braids once the colour of the snow-heavy sky. I could smell her flesh beginning to sear. I tried not to breathe her, not to breathe her in. I tried to look away. But the guards wrenched my face back again and with their filthy fingers forced my eyes open and held my eyelids up. Snowflakes were starting to swirl. Her feet were blistering, charring black in front of me. I started to vomit.

But then … then … what was left of that face … started smiling. Those swollen slits of eyes fluttered open and she started smiling…in a clear voice strong above the crackle and roar of the blaze, she began singing, ‘No other law but love She knows, By naught but love may She be known, And all that liveth is Her own, From Her they come, to Her they go.

The flames started wreathing her body. Her hair fire. She be changing into a living torch in front of my eyes. Still, she repeats the last line. But this time she sings, ‘From Her I come, to Her I go‘–and dies. Simple. Like a child dropping off to sleep…

That is what became of Petronilla de Meath.”

November 3, 1324, Petronilla de Meath indeed died a fiery death. She was a household employee of Dame Alice Kyteler, the wealthy owner of the original inn. Petronilla was accused along with Dame Alice Kyteler of heresy, sacrificing to demons, making foul concoctions to poison “the bodies of faithful Christians,” usurping the sacraments for diabolical purposes, having sex with a demon, and even murder. Dame Alice escaped to England, but Petronilla was caught, tortured, and (according to the trial records) “duly burnt at the stake before a vast crowd of people.”

As horrific as this is, it probably doesn’t surprise you. Of course people, especially women, were accused of witchcraft in medieval Europe. Of course witches were burned at the stake (or at least hung at the gallows). This is what happened in the medieval past. We have the humorous portrayal of a witch trail in Monty Python and the Holy Grail to prove it. The witch craze began in the medieval world.

The witchcraft trial of Dame Alice Kyteler and the subsequent burning of Petronilla was the rare exception in medieval Europe, not the rule. In fact, the reason Kyteler’s trial has received so much attention is because it is anomalous.

Yes, belief in magic existed in the medieval world. But magic mostly wasn’t seen as evil. Indeed, one of my favorite teaching texts is the fourteenth-century tale of The Witch and her Cow-Sucking Bag. A witch gets in trouble for stealing milk from local farmers, and the bishop tells her to stop.  The bishop even tries a go at the magic himself. He fails, tells the witch to start believing in God (the whole story is actually about the first commandment), and to stop stealing milk. The end. Nothing else happens to the witch.

The real enemy of the central and even later middle ages were heretics, not witches. Malcom Gaskill writes in his Witchcraft: A Very Short Introduction (Oxford UP, 2010) that witchcraft probably inherited its diabolical trappings from fears about heretics. “The belief that heresy was satanic and organized owed much to hostility towards Waldensians (heretics). In the 1430s, an inquisitor in the duchy of Savoy wrote a treatise entiled Errores Gazariorum–‘Errors of the Cathars or Waldensians’. This describes in grisly detail the society of heretics, demonstrating that the secret nocturnal congre 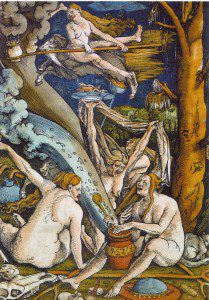 gation –or’sabbat’–was perfectly conceived before it joined the iconography of witchcraft. Upon swearing loyalty and a devotion to malice, it was said, the initiate ‘adores the presiding devil and pays homage to him; and as a sign of homage kisses the devil, whether the devil appears as a human or some kind of animal, on the anus’. Before long, the shameful kiss, or osculum infame, mentioned by the bishop of Paris two centuries earlier, would be uniquely associated with witches (by 1500).” It is after this diabolical association that the witch craze took off in Europe.

The witch craze, as I am frequently telling my students, was an early modern phenomenon–not a medieval one.

So what about Dame Alice Kyteler? Well, she was a wealthy woman about to inherit from the death of her most recent husband. Her step kids got upset, and essentially sued her. A demon-obsessed bishop got involved; Petronilla was burned at the stake; Alice Kyteler was run out of town. It was a family squabble over inheritance. Sorry for destroying the romance and gothic-horror of a witch-burning. The unromantic truth behind the Kyteler story reminds me of another famous witchcraft trial from the 17th century. This one, instead of a family squabble, was a squabble over a football game (yes, seriously).

In short, our modern understanding (belief?) about medieval witchcraft is rooted in something other than the medieval past. Following in the footsteps of my colleague and fellow blogger Philip Jenkins, it is this “something other” that I want to talk about in my next post. Just in time for Halloween.

If you’d like to comment on this or other Anxious Bench posts, please note that World Table is having some problems with Firefox as it operates on Macs, and their best efforts to resolve the issue have not yet worked. If you do run into problems, try an alternate browser, such as Chrome or Safari. Thanks! 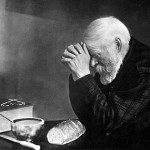