The Bonhoeffer Effect, “Unpleasant Parallels,” and the 2016 Election

Not surprisingly, an election that has prompted analogy after analogy to the rise of National Socialism has also inspired Christians on both sides to claim the legacy of the Nazis’ most famous Protestant victim: Dietrich Bonhoeffer.

Earlier this year, for example, Methodist biblical scholar David Watson started a blog post by recalling Bonhoeffer’s refusal to accommodate Christian faith to National Socialism. “The necessity of such a distinction—between the values of our faith and the values embodied in large segments of the wider culture—is once again becoming apparent,” he warned readers. “No, Trump is not Hitler, but he nevertheless embodies values that should cause serious concern among Christians.”

But conservative intellectual and Bonhoeffer biographer Eric Metaxas seemed to reach a different conclusion. As he tweeted in late May:

Metaxas later claimed to be joking, but he was very serious when he then came out in support of Donald Trump this summer, saying that the country faced a “Bonhoeffer moment.”

(Incidentally, the same language was used a year earlier by Christian conservatives anxiously awaiting the Supreme Court’s decision on same-sex marriage: “…this is a Bonhoeffer moment for every pastor in the United States,” Ronnie Floyd told fellow Southern Baptists.)

Hoping to avoid Trump’s nomination, Warren Throckmorton turned Metaxas’ phrase around: “…we need GOP delegates to have a Bonhoeffer moment at the convention. They are not bound to vote for the worst choice.” For many Christian critics of Trump, the actual lesson of Bonhoeffer’s life was the need to reject moral compromise when faced with the temptation of political power.

But just last week Metaxas returned to the notion of “unpleasant parallels.” Defending his endorsement of Trump, he argued in the Wall Street Journal that Christians could support a candidate whose comments are often “horrifying,” if that sin prevents a greater evil:

The anti-Nazi martyr Dietrich Bonhoeffer also did things most Christians of his day were disgusted by. He most infamously joined a plot to kill the head of his government. He was horrified by it, but he did it nonetheless because he knew that to stay “morally pure” would allow the murder of millions to continue. Doing nothing or merely “praying” was not an option. He understood that God was merciful, and that even if his actions were wrong, God saw his heart and could forgive him. But he knew he must act.

I tend to think that the analogies to 1933 are problematic to start with, but the repeated references to one martyr risk exacerbating what we might call “the Bonhoeffer effect.”

I first heard this phrase about ten years ago, in a talk by Holocaust scholar James Waller at Samford University. I haven’t seen him use it in print, but I’ll restate the “Bonhoeffer effect” as this:

Preferring to tell and retell the heroic story of Bonhoeffer, Christians tend to obscure the harder, more complicated historical truth that most Christians and churches were at least somewhat complicit in the evils of National Socialism. 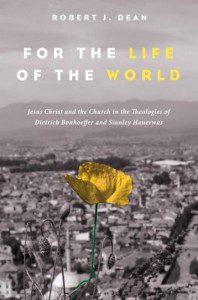 So the parallels to be drawn — if they ought to be drawn — may be even less pleasant than Metaxas thinks. For example, Bonhoeffer scholar Robert Dean suggested that we should be looking to the beginning of the Nazi period, not its end:

While we cannot simply equate events from history with contemporary circumstances, if there is an analogy to be drawn between Bonhoeffer’s time and our own, surely it is with the events of 1933.  A once great nation had been humbled by its defeat in the First World War and was suffering under the humiliating conditions imposed upon it by the Treaty of Versailles.  Rabid inflation had left many struggling to make ends meet and millions were left unemployed.  In the midst of this constellation of circumstances, there arose from outside of the establishment a charismatic figure promising a return to Germanic greatness and glory.  His criticisms of the workings of Weimar Republic establishment and his xenophobic and isolationist impulses appealed to struggling sectors of society looking for a scapegoat.  Church leaders, who had seen their power and influence wane following the formation of the constitutional democracy of the Weimar Republic following the First World War, eagerly embraced the carrot of restored cultural influence and power dangled before them by the charismatic leader.

As it happens, one of my recent side projects has been to research and write a magazine article surveying Christian responses to National Socialism. You’d never know it from the kinds of things I write about now, but fourteen years ago I submitted a doctoral dissertation on education in mid-20th century Germany. Mostly, I was interested in the attempted reform of schools and universities in the Allied occupation of western Germany after World War II, but the first chapter surveyed the experience of such institutions — including confessional schools — under National Socialism. 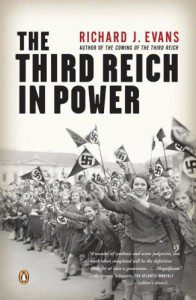 To refresh my memory, I recently re-read Richard Evans’ stellar survey The Third Reich in Power, 1933-1939, which offers detailed analysis of religion in the Nazi “coordination” of German society. Let me just share a few nuggets from Evans that we might want to contemplate:

• Long before Hitler’s particular candidacy, the experience of World War I made clear that “nationalism and Protestantism had become two sides of the same ideological coin” (p. 220). When this holy nationalism was wedded to suspicion of anticlerical parties (whether the social democrats and liberals associated with the Weimar Republic or the Communists who joined the Nazis in hoping to tear down that democracy), it’s no surprise that Protestant pastors celebrated Hitler’s ascendancy in 1933 by holding mass baptisms for children left unchristened during the more secular years of Weimar.

• The “German Christian” movement — which treated Hitler as a messianic figure, rejected the Old Testament, and denied the Jewishness of Christ — never claimed more than 1% of the German population. But it garnered strong support from

young pastors from lower-middle-class backgrounds or non-academic families, men for whom war service had often been a life-defining experience, and racially conscious pastors from areas near Germany’s eastern borders for whom Protestantism represented German culture against the Catholicism of the Poles or the Orthodox faith of the Russians.

The notion of borderlands breeding racial consciousness is especially noteworthy, since Evans earlier noted that German Protestants tended to see WWI “as a religious crusade against the Catholic French and Belgians and the Orthodox Russians.” But even more intriguingly, he continues the passage by turning to masculinity:

Such men desired a Church militant based on the aggressive propagation of the Gospel, a crusading Church whose members were soldiers for Jesus and the Fatherland, tough, hard and uncompromising. Muscular Christianity of this kind appealed particularly to young men who despised the feminization of religion through its involvement in charity, welfare and acts of compassion. The traditional Pietist emphasis on sin and repentance, which dwelt on images of Christ’s suffering and transfiguration, was anathema to such men. They demanded instead an image of Christ that would set a heroic example for German men in the world of the here and now. For them, Hitler took on the mantle of a national redeemer who would bring about the rechristianization of society along with its national awakening. (p. 224)

• Evans does not overlook Bonhoeffer, or other Christians who resisted Hitler at risk to their lives or livelihoods. Two such public protests happened on the same politically freighted day: January 30, 1937 — the fourth anniversary of Hitler’s appointment as chancellor. When Hitler tried to pin a party badge on those members of his cabinet who hadn’t yet joined the Nazis, the Catholic transport minister, Paul von Eltz-Rübenach, refused and told him to stop repressing the Church. (Hitler stormed out, and Goebbels convinced Eltz-Rübenach to resign.) That same day, Confessing Church pastor Martin Niemöller preached a sermon about the apostle Paul’s imprisonment and prayed for non-Aryans who had lost their jobs.

At the same time, such protests were independent of each other. And Protestants complained little if at all about the Nazi regime imprisoning priests (as many as one in three faced some state discipline) or launching a propaganda crusade alleging that the Church was harboring pedophiles and other sexual predators in the clergy. Evans finds it significant that Niemöller later mentioned leftists and Jews in his famous “First, they came for” poem — but not Catholics.

Indeed, one of the key themes that emerges from Evans’ coverage of religion in Nazi Germany is a historical continuity: the unremitting hostility between the Protestant majority and Catholic minority. Evans concludes that the main reason that German Catholics restrained their resistance was their “deep-seated desire… since Bismarck’s time to be accepted as a full part of the German nation” (p. 248).

• For that matter, there was some significant overlap in worldview between such resisters and their Nazi and German Christian opponents. Bonhoeffer stated in 1934 that “dreamers and the naïve like Niemöller still believe they are the true National Socialists.” A year later, Niemöller preached that God had cursed the Jews as a penalty for the Crucifixion. He and other Confessing Church leaders, concludes Evans, “believed that baptized Jews were by definition no longer Jews, and they cared little about the unbaptized” (p. 228).

• Only one non-Jewish religious group registered “uncompromising hostility to the Nazi state,” and it was a small sect that most other Christians regarded as heretical. Jehovah’s Witnesses refused to serve in the military, vote, participate in public demonstrations, or give the Nazi salute. By 1945 about one-third of the country’s 30,000 Witnesses had been imprisoned. Rudolf Höss (later the commandant of Auschwitz) reported that SS head Heinrich Himmler was so impressed that he held up the Witnesses as models of “fanaticism” for his own men.

Again, I tend to think we overreach with most historical analogies. (“…it falls apart on closer examination,” I wrote about my own most recent attempt at such analysis.) But if we Christians are going to insist on drawing analogies between the German past and the American present, maybe we ought to look beyond Bonhoeffer. 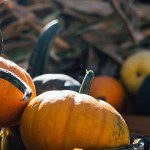