This is from my archives at the Anxious Bench, originally published Oct 31, 2015. Although I have previewed it this year with my recent 2016 posts  Burning Witches in Medieval Europe? and The Modern Roots of Pagan Halloween , this post stands as I originally wrote it. We, of course, will carve pumpkins again very soon (next week)–my daughter has been practicing drawing her pumpkins faces. Happy Halloween!

I carved pumpkins with my kids this week. My son is finally old enough to wield his own knife, but my daughter had to settle for a marker. I, of course, had to clean out the insides.

The effort was well worth it (even with the mess on my patio) when we lit the candles and stepped back to admire the glowing, flickering faces.

As a historian, I find this poll disappointing. Not because I think everyone should participate in Halloween (I don’t really care that much), but because the very wording of the poll–“When you consider the pagan elements of Halloween, which is closer to your attitude?”–conveys that Halloween is still mostly regarded as a non-Christian holiday.

Yes, Halloween has similarities with (possibly accretions from) Samhain, the Celtic end-of-summer celebration.

But this does not make it a pagan holiday. As historian Nicholas Rogers, author of Halloween: From Pagan Ritual to Party Night (Oxford University Press, 2002), states, “If Samhain imparted to Halloween a supernatural charge and an intrinsic liminality, it did not offer much in the way of actual ritual practices, save in its fire rites. Most of these developed in conjunction with the medieval holy days of All Souls’ and All Saints’ day.” Indeed, most of the traditions we associate with Halloween are medieval or early modern in their origin–not “pagan”.

First, we know that festivals commemorating saints (All Hallows Eve) existed in Europe by 800. We also know that these festivals were not created to supplant previously-existing pagan rituals. The Irish world (which provides the origin of the Celtic feast Samhain) celebrated a feast for saints in April  while the Germanic world (which did not recognize Samhain) celebrated in November. What does this tell us? It tells us that the actual chronology of Halloween “contradicts the widely held view that the November date was chosen to Christianize the festival of Samhain” (Rogers). In fact, John Mirk’s Festial (the most popular orthodox sermon compilation in late medieval England) actually explains the origins of “All Hallows Eve”. Pope Boniface IV converted the Roman Pantheon into a Christian church dedicated to saints and martyrs during the 7th century. This day was then commemorated as All Saints’ Day. While Mirk’s story does tell about the Christian appropriation of a pagan temple, his narrative is firmly situated in a Christian event (the dedication of a new church) far removed from the Celtic world of Samhain. From this medieval perspective, “Halloween” is a celebration of Christian triumph over paganism, rather than a pagan holiday masquerading as Christian.

Second, in the words of historian Ronald Hutton, we have “no idea” about what actually happened during the Celtic celebration of Samhain. Despite what you may have read from Pat Robertson’s website or from James Frazer’s The  Golden Bough (a classic social anthropology study from 1890 that explores the parallels between Christianity and ancient mythology), we have very little evidence about the actual practices of Celtic people or their festivals. Nicholas Rogers argues that James Frazer’s description of Samhain in The Golden Bough anachronistically projected medieval traditions onto the past (as Rogers writes, “there is no hard evidence that Samhain was specifically devoted to the dead or to ancestor worship”). In fact, scholars really aren’t sure what “Celtic” culture entails. Some are even questioning the reality of the “Celts” as a coherent people group.

Let me say it again, we have very little evidence about the actual festivals of the people we know as Celts.

It is the medieval Christian festivals of All Saints’ and All Souls’ that provide our firmest foundation for Halloween. From emphasizing dead souls (both good and evil), to decorating skeletons, lighting candles for processions, building bonfires to ward off evil spirits, organizing community feasts, and even encouraging carnival practices like costumes, the medieval and early modern traditions of “Hallowtide” fit well with our modern holiday.

It means that when we celebrate Halloween, we are definitely participating in a tradition with deep historical roots. But, while those roots are firmly situated in the medieval Christian past, their historical connection to “paganism” is rather more tenuous. 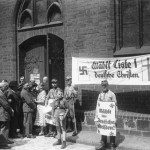 October 18, 2016
The Bonhoeffer Effect, "Unpleasant Parallels," and the 2016 Election
Next Post

October 20, 2016 Latter-day Saints and the Anointing of Jesus
Recent Comments
2 Comments | Leave a Comment
Browse Our Archives
get the latest updates from
Anxious Bench
and the Patheos
Evangelical
Channel
POPULAR AT PATHEOS Evangelical
1 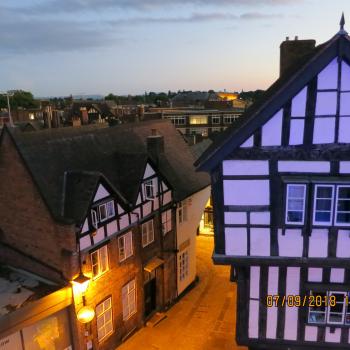 Evangelical
What I Learned from a Good Academic Book...
Anxious Bench 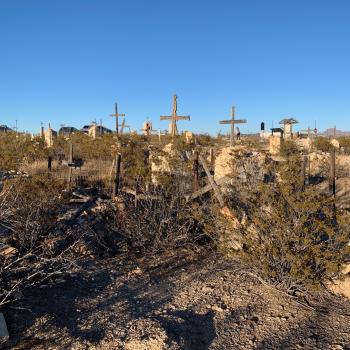