In recent columns, I looked at what happened to a religion heavily focused on hierarchy and clergy when it was cut loose from those moorings – how in fact it reverted to what we might call a default kind of religion. I noted for instance the emphasis on sacred places and objects, on charismatic individuals, and the central focus on preserving relations with the dead. Believers are also drawn by the prospect of healing. I produced a ten point system, which I invite you to look at. Just to speculate here: might that model await us in the future, much as we have known it in the past? If future Western (and particularly European) societies did secularize even more than they are doing presently, do these ten points provide a predictive framework for what would remain?

Not long since, I blogged at aleteia.org about Philip Larkin’s 1955 poem “Church Going,” which I regard as one of the greatest meditations on faith in an age of secularization. If you don’t know it, it is very well worth seeking out. For copyright reasons, I won’t quote the whole thing here, but you can find the full text easily online at lots of sites.

In the poem, a passing cyclist, presumably an agnostic like Larkin himself, steps into a deserted church. Finding nothing of special aesthetic interest, he leaves fairly rapidly but is still puzzled at why even he bothered to stop. What exactly is the remaining pull of a place that is notionally holy? And if, as seems obvious, religion is in such sharp decline, what will be the ultimate fate of such places when they fall into disuse and ruin? Might they be objects of superstitious terror, unlucky places? Or will they be special and magical, thin spaces where different worlds encounter each other, where women come to seek healing for sick children, where some might hope to see the dead walking. Superstition might endure a while, but ultimately, even that will fade. So what happens when disbelief has gone, along with faith itself? Who, in fact, will be the last person to have any sense of what the place really was?

Larkin’s point, though, is that such spiritual instincts and associations never wholly die, even when all the institutional forms of religion are extinct. When all else is gone, the memory of sanctity remains:

A serious house on serious earth it is

In whose blent air all our compulsions meet

Are recognized and robed as destinies.

And that much never can be obsolete

Since someone will forever be surprising

A hunger in himself to be more serious

And gravitating with it to this ground

Which he once heard was proper to grow wise in

If only that so many dead lie round.

To borrow the poem’s title, the Church has “Gone” – but never wholly. The parallels with the historical experience I described recently, in the writings of Erasmus Saunders, are numerous and telling. I see no reason to believe Larkin had read Saunders, although he was extremely literate and widely read – but it is almost as if he is versifying that eighteenth century account.

“Church Going” is a wonderful, provocative poem, which actually has more to say about secularization and its limits than a thousand scholarly articles.

Do we see here a model for Europe’s future religious evolution? 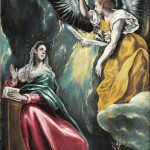