I’ve written a couple of posts this month about the Christian relationship to time, and how the ways that we steward that dimension of God’s Creation can be quite formative. One of the most subtly powerful ways that we do this is by following the liturgical calendar. As philosopher Jamie Smith explains: 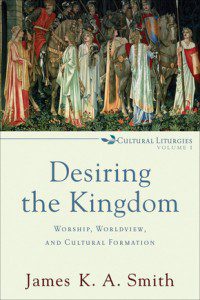 If we read the practices of Christian worship, we would conclude that Christians are a people whose year doesn’t simply map onto the calendar of the dominant culture… the distinct marking of time that is integral to historic Christian worship establishes a sense that the church is a “peculiar people,” and the liturgical calendar already constitutes a formative matrix that functions as counter-formation to the incessant 24/7-ness of our frenetic commercial culture. (Desiring the Kingdom, pp. 156-57)

That doesn’t mean that we ignore the secular calendar that declares today to be November 29, 2016. But attending to two calendars reminds us that we live as alien citizens. Smith’s reference to Christians as a “peculiar people” borrows from the King James translation of 1 Peter 2:9, whose author goes on to describe us as “strangers and pilgrims.” So a practice like observing the liturgical calendar helps us to remember (as Augustine put it in City of God) to live as citizens of a “most glorious city, which sojourns as a stranger in this world, and seeks the heavenly country.”

For example, here’s how Smith understands the “counter-formative” function of the season that began this past Sunday:

…as the commercialization of Christmas has the “season” of consumption creeping from Thanksgiving all the way back to Halloween, the Christian observation of Advent marks a different orientation to time, particularly when it is recognized that Advent is a penitential season of denial and self-examination rather than of accumulation, consumption, and self-indulgence.

This year I’m especially cognizant of one other blessing of Advent: that while we’ll have to wait to see what entries December adds to the already terrible chronicle of 2016, Christians don’t need to wait to celebrate New Year’s. At least in Western churches, the liturgical year reset on Sunday. (Our Eastern Orthodox brethren begin their church year on September 1st.)

And this New Year is quite different from the Christmas-curtailing, hangover-nursing, football-saturated version that takes place on January 1st.

First, while that New Year’s Day trains us to think of our relationship to the past in terms of “turning the page” or “cleaning the slate,” Advent cultivates a more complicated understanding of the passage of time. On the one hand, it’s a remembrance of Incarnation, a reminder that God took flesh and dwelt among us not only in a particular place but at a particular time. (“In the days of” a local ruler, reports Luke, using the calendrical conventions of his time — just before he subverts them by having Mary sing about God bringing “the powerful down from their thrones.”) And all that in fulfillment of promises that take us still further back into the past. (Both Mary and Zechariah name Abraham in their famous canticles.)

But Advent is about second coming, too. It, says Smith, “shakes us out of the presentist complacency that we can be lulled into. Instead, we are called and formed to be a people of expectancy—looking for the coming (again) of the Messiah.”

Secular New Year’s orients us toward the future, as we resolve to live differently in the days and months to come. But it’s a sign of how unseriously we take these resolutions that custom has never assigned a later holiday in that calendar as the check-in for those goals. Resolutions point to a future without expectation.

Meanwhile, Advent marks the new year as a time to respond like Mary did to the angel Gabriel: “Here am I, the servant of the Lord; let it be with me according to your word” (Lk 1:38). With this pledge of release, not resolve, Mary revels in God’s grace rather than boasting of her own strength. This new liturgical year, may you do the same.

(Incidentally, before January 1st took on that meaning in the mid-18th century, English-speakers like the colonists in Massachusetts marked March 25th — the Feast of the Annunciation — as New Year’s. Of course, for an agrarian economy in the northern hemisphere, it also made legal and economic sense to start contracts around the time of spring planting, rather than in the dead of winter.)

November 30, 2016 Bringing the Spirit of (Medieval) Santa Back to Christmas
Recent Comments
0 | Leave a Comment
Browse Our Archives
get the latest from
Anxious Bench
Sign up for our newsletter
POPULAR AT PATHEOS Evangelical
1

Evangelical
4 Things I Want My Students to Know...
Anxious Bench

Evangelical
How to Hide an Empire
Anxious Bench