The Convincement of Richard Davies

I want to recommend a book that is a major source on Christian history. It really is not well known or cited by non-specialists, and that is sad. The story it tells is critical for Protestantism in general, for Puritanism, British religious history, for attitudes to the authority of scripture, and for American religious origins. It is also a wonderful and moving read in its own right. It should be recognized as a spiritual classic.

The book in question has the distinctly non-snappy title of An Account of the Convincement, Exercises, Services and Travels of that Ancient Servant of the Lord, Richard Davies: With Some Relation of Ancient Friends, and of the Spreading of Truth in North Wales. First printed in 1710, it went through at least seven editions over the next two centuries. You can easily download copies from multiple sources, including Google books: just enter the title and choose the edition you want.

The Convincement tells the story of Welsh Quaker pioneer Richard Davies (1635-1708). He accepted Quakerism in 1657, and thereafter became a prominent leader and evangelist for the sect. He traveled widely, but his main areas of influence were in the Welsh counties of Montgomery and Merioneth. Much of the book concerns the persecutions he suffered through most of his life.

So the book is important in Quaker history, and that matters enormously for American history. The early settlement of Pennsylvania was a Quaker enterprise, and a great many of those settlers were Welsh – specifically from those areas of Merioneth and Montgomery. Most were Richard Davies’s spiritual offspring, and Davies himself corresponded intimately with William Penn (“Dear Will”).

Quakers, though, did not appear from nowhere, and the most interesting point about Davies’s book is what it suggests about the crisis of Puritanism, and of Protestantism in an age of political and religious revolution. Look for instance at those dates. Davies was born in 1635. When he was seven years old, Britain began a civil war that killed hundreds of thousands, and that lasted from 1642 through 1648.. The Archbishop of Canterbury was executed in 1645, the king himself in 1649. By 1649, England and Wales were under a radical Puritan religious regime, in which radicals were constantly calling for more extreme solutions. There were millenarians and believers in imminent apocalypse, many of whom were well armed and organized in the armed forces. The central state, under Oliver Cromwell, was struggling to hold on to any idea whatever of a state church with compulsory tithes. Wales’s first Baptist churches were organized in the late 1640s, very much around the same time that the king was beheaded.

Strongly present in many minds was the nightmare precedent of Münster in 1534, when Anabaptist extremists had created a bloodthirsty millenarian dictatorship. In Wales itself, there were truly frightening military radicals like the followers of Baptist warlord, Vavasor Powell. These conflicts came to a head when Cromwell assumed the quasi-royal title of Lord Protector, as Puritan leaders split over the issue of republicanism. Vavasor Powell and many Welsh Puritans argued that earthly monarchy was a symbol of the rags of Antichrist, and that Cromwell was effectively a new Charles I. Wales became a stronghold of the Fifth Monarchy party, which elsewhere in Britain tended to be an urban faction. In 1654, Powell organized a republican petition/manifesto called A Word for God . . . .against wickedness in high places. For non-radicals, the great fear was that the military theocratic regime operating in Wales was a dry run, a blueprint for the whole kingdom. A new rebellion or civil war seemed quite plausible.

In both England and Wales, the great question in such a revolutionary time was how far matters might go. Might the state church be abolished altogether? Might wild heresies sweep the country? Might extremists abolish private property and overthrow the rich in the name of equality? In such a turbulent world, what was still sacred? By the mid-1650s, the British Isles generally were entering a period of spiritual crisis when almost any beliefs and practices seemed open to debate – including the Trinity, the divinity of Christ, and to the basis of religious authority of any kind.

Where could anyone find authority in religion?

These schisms and struggles culminated in the Quaker crisis of the mid-1650s. The Quakers absolutely rejected clerical authority of all kinds, including that of the Puritan ministers themselves, and they preached a radical equality that was reflected in their use of the intimate terms thou and thee. They refused to speak of any building as a “church,” because the true church was made up of believers: instead, they called them steeple houses. Throughout these events, women activists were very prominent, as the religious “civil war” rent pious households.

This agonizing era represented the logical culmination of Puritanism, and perhaps of the Reformation itself.

You can read any number of specialist histories of that era, but if you read Richard Davies, you understand at first hand what it was like growing up in such a world – with someone who was fourteen when the king was beheaded, and nineteen at the time of A Word for God. He describes the prolonged spiritual crisis in which he lived from roughly 1647 until 1656, when he frequented all manner of congregations, including those of Vavasor Powell himself. Davies describes his own personal crisis intimately, all the seeking that ultimately led him to reject the visible church and the supremacy of scripture. Finally, though, he found his peace in Quakerism.

More on Richard Davies next time. 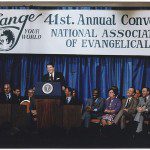