Spreading the Faith: Lessons from US History

We hear a lot today about the effects of immigrants on American religion, and the rise of a majority-minority country. I am always surprised that in such discussions, writers rarely pay attention to an era of US history that is today more relevant than ever, namely the mass influx of immigrants in the previous great immigration, between 1880 and 1924. Of course, the analogies are not perfect, but they are richly informative, and they apply to all contemporary faiths and denominations, not just Catholics. (I am adapting the following from a piece I published at aleteia.org. Please also note that my Baylor colleague Tommy Kidd also posted on this same era at another site).

The numbers involved were proportionately even larger than those in recent times, In 2010, 12.9 percent of Americans were foreign born, but that figure was actually lower than at any point in the nation’s history between 1860 and 1924. In 1890, the figure peaked at 14.8 percent, and almost reached that crest again in 1910. And although the vast majority of immigrants in that era were European, many were classified by the standards of the time as non-White.  That label applied to Jews, but also to Italians and southern Europeans, and many east Europeans. Much scientific endeavor in those years was devoted to proving the physical and intellectual gulf that separated those categories from superior White Americans.

Or as Woodrow Wilson notoriously proclaimed in 1902,

Immigrants poured in as before, but…now there came multitudes of men of lowest class from the south of Italy and men of the meanest sort out of Hungary and Poland, men out of the ranks where there was neither skill nor energy nor any initiative of quick intelligence; and they came in numbers which increased from year to year, as if the countries of the south of Europe were disburdening themselves of the more sordid and hapless elements of their population.

Over time, though, peoples and races do indeed become white. I have worked a good deal on American ethnic history, and I am often struck by the potent analogies between the “mainstream” or “old-stock” response to Latinos today and the very similar attitudes to Italians a century ago. Look, for instance, at popular culture images of Italian-Americans in the 1920s and 1930s, which are often demeaning or condescending even when they are trying not to be outright hostile. A sizable body of “mainstream” opinion back then held that Italians could never be truly American, or truly white.

Today … well, go into a meeting place or social gathering in South Philadelphia and tell the Italian-Americans there assembled that they are not truly American, and certainly not white. If you like, throw in sordid and hapless. I will pay good money to observe the ensuing conversation.

Such historical analogies apply especially in the religious dimension. If you want to understand the appeal of churches in an era of migration, look back at American cities in the early twentieth century. Look at how people clung to those institutions to find community and comfort in a hostile world, and often how they tried to reconstruct their lost home societies in miniature. And look at the phenomenal growth of the Roman Catholic church above all on the strength of successive waves of migrants, from the Irish of the Famine years onward. At the time of the American Revolution, Catholics made up less than one percent of the nation’s population, but that rose to five percent in 1850, twelve percent in 1890, and seventeen percent by 1906. The modern proportion has usually fluctuated around a quarter.

Migration, then, can fundamentally change the religious or denominational balance of a society.

Beyond noting the critical importance of religious institutions then and now, we also trace other parallels in the practical issues raised by mass immigration. What, for instance, is or should be the relationship between old and new ethnic groups in particular denominations? In that earlier era, we see endemic clashes and debates between old and new believers — usually civil, sometimes not, and sometimes so grave as to detonate schisms and separations.

One recurring grievance was the ethnic split between the hierarchy and the newer generation of clergy and laity. In 1907, Polish believers became so disenchanted with (mainly) Irish bishops that some created a whole new Polish National Catholic Church. Philadelphia (again) offers some wonderful examples of this story, mainly focused on the authoritarian Irish cardinal Denis Dougherty*. I quote Bill Tonelli, from Philadelphia Magazine:

As Richard Varbero wrote in his excellent 1975 doctoral dissertation, Urbanization and Acculturation: Philadelphia’s South Italians 1918-1932, “Dougherty could not hope to make the Italians Irish, but he could at least attempt to make them respectable.” It’s not by accident that Philadelphia has no major Italian religious festival, like the San Gennaro feast in New York. (The sole local equivalent that took root is safely out of sight in Hammonton, New ]ersey.) The main show of forceful resistance to Dougherty came in 1933 when his plan to close an Italian church — Our Lady of Good Counsel, near 8th and Christian — sparked a riot in which angry parishioners imprisoned a priest inside the rectory and threatened to burn the church down. In the end, though, Dougherty carried out his plan just as he had announced it.

Similar grievances affected Eastern European Catholics who followed the Uniate rite: in other words, they practiced the Orthodox liturgy, but were obedient to Rome. On American soil, though, many Uniate believers were so disaffected that they abandoned Rome to become full-fledged Orthodox congregations.

On so many other points, we can observe issues currently under fierce debate in American churches, across the denominational spectrum. We see the familiar and fundamental debate over the existence of ethnic congregations: should churches try and keep newcomers at arm’s length, or integrate them fully into existing church life? What about the use of the English language, as opposed to the immigrant tongues?

Critically, what happens to immigrant groups in the second and third generations? Do they cling to ethnic churches, or seek out “mainstream” congregations, as they define themselves as White Americans rather than “ethnics”? Or do they abandon faith altogether?

One terrific book on this theme of transition is Robert Orsi’s Thank You Saint Jude (1998), which uses the thousands of letters sent by ordinary Catholics to the national shrine of that saint of lost causes. Time and again, we hear the despairing voices of ethnic women of the second and third generations, as they strove to balance the competing expectations of their traditional-minded families with the progressive American world in which they lived their everyday lives.

Change the names and the ethnic origins, and we could well be looking at the American stories – Latino and Asian – of the next decade or two.

We’ve been here before.

*I can actually say a lot that is very positive about Cardinal Dougherty, who was magnificent on issues of race, segregation, and civil rights, not to mention an implacable foe of anti-Semitism, but that is a different story. 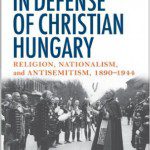 February 9, 2017
Heroes of the Faith: True, but not Accurate
Next Post

February 13, 2017 Nicholas of Cusa on the Diversity of Religions
Recent Comments
0 | Leave a Comment
Browse Our Archives
Follow Us!